The press release about the photographer’s new series said it appropriates “traditional Baroque still life paintings,” but that doesn’t really do them justice. 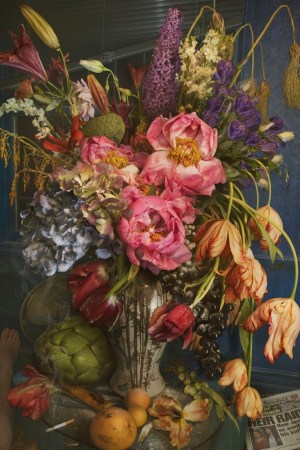 GOING FOR BAROQUE…: Less than 24 hours before David LaChapelle opened his new exhibition at a walk-up gallery on New York’s West 29th Street, the photographer stopped by to see how things were coming along. The staff had hung the last of his large-scale, still-life Baroque-style flower photographs minutes before his arrival and LaChapelle walked around the room slowly, nodding in approval. If he was nervous about the Thursday night opening, he didn’t show it.

The press release about LaChapelle’s new series said it appropriates “traditional Baroque still life paintings,” but that doesn’t really do them justice. First of all, they are each 72-inches tall and it’s not just flowers and fruit shot against a black background. His flowers are wilting, some poisonous. He’s replaced classic accompaniments, such as a horn of fruit, with a Michael Jackson-headlined New York Post, sex toys, Cheetos and prescription pill bottles.

“Symbolic items were typically placed in these paintings to tell a story,” said LaChapelle. “Symbolism has become less important because everything will be thrown away these days. It used to be that a quill would be shown as a letter of communication to a lover, a glass of water could mean purity. So we did the modern equivalent.”

Those more familiar with LaChapelle as a fashion photographer may not know this side to him, but he spends the majority of his time on fine art now, working between his home in Maui and studio in Los Angeles. A few times a month, he’ll take a job shooting for mainstream brands, to maintain relationships and keep his crew busy. His new colorful campaign for MAC Cosmetics, featuring Nicki Minaj and Ricky Martin, is a recent example. “It’s superfun and zero stress,” he said.

LaChapelle can pick and choose his commercial work because he paid his dues shooting for fashion magazines for more than 20 years. He was discovered by Andy Warhol and shot steadily for Interview and then Vanity Fair, GQ and Rolling Stone, to name a few. He stopped cold-turkey in 2006, because he couldn’t turn down work and he said his life became unbalanced.

These days, LaChapelle claimed, he doesn’t pick up a fashion magazine unless it’s in the back of a Town Car. “I don’t miss it at all,” he said. “Now I’m into The Week and National Geographic.”

Asked if he’d buy a fashion magazine again if it featured his new series, “Earth Laughs In Flowers,” LaChapelle thought for a moment. Staring at his photograph titled “Springtime,” he said, “I would check it out on the newsstand. Magazines were my education, it was like university for me. I’m doing other things now.”