Once a year the magazine focuses on long-form travel writing in the form of single-topic issues, which has earned it critical acclaim. 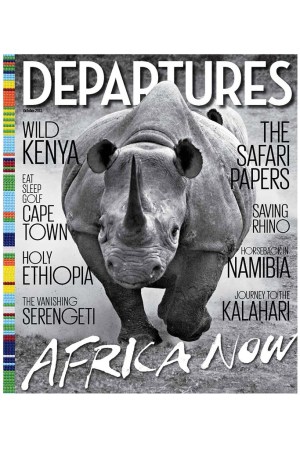 GOING LONG: Philip Gourevitch’s latest piece, on the 19th anniversary of the Rwandan genocide, is not in The New Yorker. Mark Seal has 5,000 words on the Serengeti Highway, but it’s not in Vanity Fair. And Paul Theroux, the dean of long-form travel writers, could have his pick of venues for a tone-poem about “The Malawi I Loved.” But they’re all in the fall issue of Departures, the magazine that is mailed seven times a year to American Express Platinum and Centurion card-holders. Departures’ main subject, as summed up in its “Life at its Best” slogan, is the leisure class, its interests and pastimes. It’s where Graydon Carter, the editor of another magazine about the affluent, Vanity Fair, gets to rhapsodize about his love of rosé wine. But it’s beefed up its journalistic credentials for the new issue, which is devoted to sub-Saharan Africa.

You can rely on Departures for think-pieces on the Maldives or the overhanging gardens of Marqueyssac, but once a year the magazine also devotes significant editorial acreage to long-form travel writing in the form of single-topic issues — Latin America in 2006, Russia in 2007 and India in 2008 — which is becoming increasingly rare in travel magazines. Condé Nast Traveler’s new editor in chief Pilar Guzman has said she will trim similar content to focus more on service and lifestyle.

This story first appeared in the October 8, 2013 issue of WWD. Subscribe Today.

With a closed circulation and immune to the pressures of the newsstand, Departures can afford to do these deep-dives, which have also earned it critical acclaim. The Latin America issue won a National Magazine Award, while an issue devoted to Russia the next year was a finalist.

Richard D. Story, Departures’ editor in chief, said the appeal of the single-topic issues is that they’re a point of difference with the competition.

“That ‘Dispatches’ section” — which has the Theroux and Gourevitch essays — “that’s not really the stuff you’d find in other luxury travel magazines. I don’t think you’d find it in the new Vogue Traveler,” he said, making a veiled reference to the involvement of Condé Nast artistic director and Vogue editor in chief Anna Wintour in the hiring of Traveler’s new editor.

A luxury magazine taking on a subject as sensitive as Africa is a tricky proposition — badly executed, the editors can look out of touch. That problem was made clear as the issue, which features headlines like “Sexy, Cool Kenya” and “Kenya’s Happy Valley,” was getting dropped off in subscribers’ mailboxes a few days after Islamist militants killed 60 people at a Nairobi mall in late September. Departures’ editors rushed to post a note on the magazine’s Web site urging caution when traveling.

The Africa issue was in the works for a year, Story said, partly because of the logistics of traveling and assigning features in Africa and also because the mix had to walk a very fine tonal line, to “entertain the reader but bring seriousness to the subject matter,” Story said.

“This issue definitely presents the good, the bad and the very ugly. There are a lot of big social issues that are dicey to cover, and I certainly didn’t want to come across as the great white man who could prescribe exactly what was wrong with Africa,” Story said. For contributors, he and his editors sought out writers based in Africa or with significant international reporting credits.

Marie Brenner and Michael Shnayerson are other Vanity Fair regulars who contributed work to the new issue — she revisits Kenya’s infamous Happy Valley, he reports from Ethiopia — while Teju Cole, a regular in The New Yorker who is based in Nigeria and the U.S., writes about the contradictions of today’s Lagos.

This issue was not the first time Story has had to contend with the awkwardness of magazine lead time. Two weeks before 9/11, he closed a single-topic issue devoted to New York. The cover was a 1932 Berenice Abbott aerial shot of Manhattan. He said the Kenyan tragedy didn’t take away from the relevance of an Africa-themed issue “any more than [9/11] made New York a less magical place.”