Bill Wackermann is expanding his reach... The big royal news over the weekend was... Looking to capitalize on its history, Vogue has opened its archive... 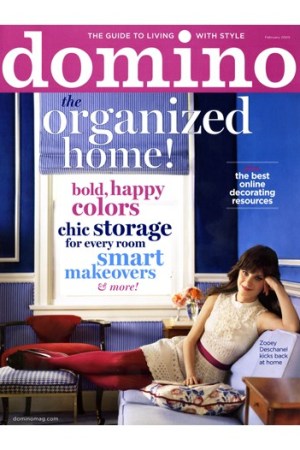 “Bill Wackermann is one of our top business brand-builders, and I look to him to leverage Domino’s strong assets and continue to grow the brand’s vitality in the marketplace,” said Charles Townsend, chief executive officer of Condé Nast, which also owns WWD.

This story first appeared in the January 13, 2009 issue of WWD. Subscribe Today.

Domino’s circulation has doubled in the nearly four years since its launch, to 850,000. But ad pages for the title have stalled, a victim of both the broader economic decline and challenges in the housing market. Meredith Corp.’s Country Home, Hearst Magazines’ O at Home and Hachette Filipacchi Media’s Home have shuttered since last fall. Last year, Domino’s ad pages shrank 5 percent, to 692.

The move displays support from the company for the title, despite speculation that Condé Nast was considering closing Domino, along with other smaller circulation magazines such as Details and Cookie. Media observers believed the titles would be sacrificed in the firm’s cost-cutting drive and would be part of that urban legend known as Condé Nast chairman S.I. Newhouse Jr.’s “January surprise” of massive reshufflings. So far, this is the only move unveiled, but are there more such reassignments of titles in the works? Keep that e-mail in-box clear in case more corporate press releases roll in. — Stephanie D. Smith

MAKING MONEY ANY WAY IT CAN: Looking to capitalize on its history, Vogue has opened its archive and selected 10 images that have been put on display in the lobby of 4 Times Square — and are available to buy. Editors selected photos that span nearly 70 years, including Arnaud de Rosnay’s photograph of Cher in 1967 wearing Sonny Bono’s aviator sunglasses, Justin de Villeneuve’s shot of Twiggy in 1970 and an image of model Tatjana Patitz, taken in 1988 by longtime Vogue photographer Patrick Demarchelier. The images can be viewed until Feb. 16 and prices start at $2,500. — Amy Wicks

SCARY HARRY: The big royal news over the weekend was set to be Prince William’s proposal of marriage to longtime flame Kate Middleton. Last week bookmakers William Hill had even shortened the odds to 1-2 that the prince would put his girlfriend — and the rest of Britain — out of their misery and finally ask Middleton when she turned 27 on Friday. Instead, it was Prince Harry who stole the show — as he so often does. On Monday, the naughty redheaded prince got a whipping in the British press after racist comments he made in a 2006 home video surfaced in Sunday’s News of the World. In the video, filmed when Harry was at officer training school at Sandhurst, the prince refers to a Pakistani pal as “a little Paki friend” and tells another fellow soldier he resembles a “raghead.” He also pokes fun at his grandmother, Queen Elizabeth II, mimicking a telephone call in which he sends love to her corgis.

Clarence House issued a formal apology over the weekend, saying the prince did not intend any malice, but that didn’t stop the press — across the political spectrum — from letting loose. “The trouble with a hereditary monarchy is that you get what you’re given, a third-in-line of no great intellectual acuity,” cried left-leaning daily The Guardian. The conservative Daily Mail accused the prince of “incredible crassness,” while The Telegraph, another right-wing title, said the prince was showing “an unfortunate propensity” for finding himself in hot water due to inappropriate remarks or activities. Sound familiar? Harry is the grandson of none other than Britain’s reining monarch of gaffes, Prince Philip.

In the midst of the controversy, however, Harry has found a new supporter, another utterly divisive character who’s accustomed to making the odd gaffe himself: Prime Minister Gordon Brown. On Monday, Brown defended the prince and praised his military record. “I think the British people are good enough to give him the benefit of the doubt,” he said. Maybe, maybe not. — Samantha Conti

MODEL DEAL: Wilhelmina International, the agency behind the careers of Lauren Hutton, Anjelica Huston, Beverly Johnson and Gabriel Aubry, among others, is set to be acquired by New Century Equity Holdings Corp. When the transaction closes, New Century will change its name to Wilhelmina International. Public ownership will provide more opportunities for Wilhelmina to make acquisitions and increase its talent pool, said Sean Patterson, president. — A.W.