To the rhythm of a Seventies disco tune, a couple of parrots were also involved in the campaign.

MILAN — Who needs TikTokers when you can have Iggy Pop, A$AP Rocky and Tyler, the Creator busting moves in a Californian villa?

In keeping with its eccentric aesthetic, Gucci tapped the three talents for its new men’s tailoring campaign and accompanying video, which were photographed and directed by Harmony Korine.

The brand’s creative director, Alessandro Michele, intended to evoke a fun, rock star lifestyle, envisioning a meeting of these flamboyant personalities in a modernist mansion located in Los Angeles, where the campaign was shot in February, prior to the pandemic.

“The result is a group campaign with three men who I believe had fun, too,” Michele said in a statement. “There is always this image of eccentricity, because they are in fact eccentric themselves. A certain type of fun is also portrayed and the idea of how one’s obsession with appearances can create a kind of common ground that can become a sort of brotherhood. It was beautiful to see these three men together, seemingly different but very similar.” 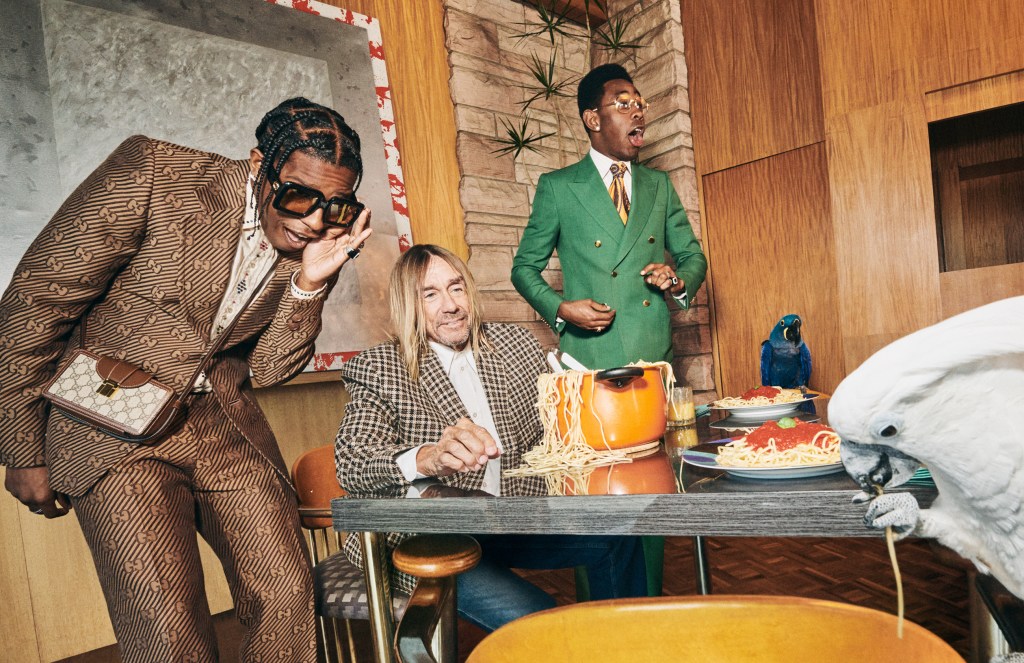 In the images, the talents are portrayed both inside and outside the bold architectural spaces of the villa, with a little company from Iggy Pop’s pet parrot Biggy Pop and a hyacinth blue macaw. While goofing around with the pets around a pot of spaghetti on a kitchen table or on a grassy terrace at night, the artists flaunt a range of monogrammed blazer jackets, three-pieces suits and popping knits, all styled with branded sunglasses, leather goods and jewelry.

But it’s a leopard-printed safari suit sported by Iggy Pop that takes the spotlight in the campaign video. To the Seventies disco classic “Supernature” by Cerrone, the American singer is seen waiting for the arrival of A$AP Rocky and Tyler, the Creator doing crosswords before welcoming his guests and letting the private party start. From sunset to late at night, the trio is seen grooving to the tune throughout the mansion, the terrace and around the pool — always guarded by their pets.

“This is another chapter of this journey,” Michele said about the men’s tailoring advertising series. “With these campaigns, I am working on different ways of being elegant, and these three men embody this idea perfectly. I like to tell the story of elegance in completely arbitrary and unexpected ways. Perhaps elegance is something in the air that sometimes you are not even ready for. Male elegance can be unpredictable and strange.”

As for Iggy Pop, this is not the first time he has appeared in a Gucci campaign. He already featured in the label’s cruise 2020 advertising images alongside Sienna Miller and Gucci Mane.