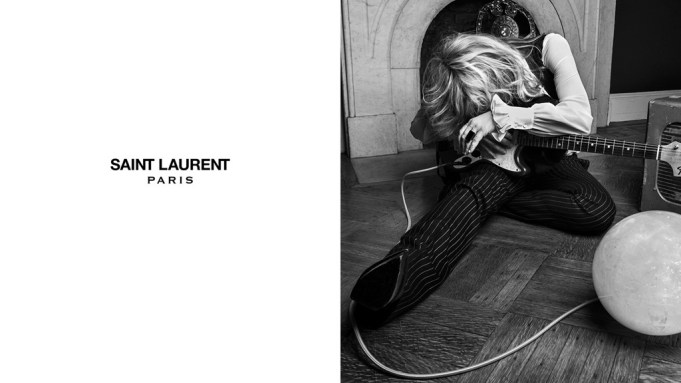 Gordon, for example, plucked Slimane’s own polka dot scarf when she posed for him in Saint Laurent’s New York photo studio earlier this year. (She also selected a tuxedo jacket, a leather miniskirt, jewelry from Saint Laurent’s Vermeil collection and a bustier dress from what’s known as the permanent collection.) Manson and the California rocker Pink will appear wearing Saint Laurent’s “L01” leather motorcycle jacket, priced at $4,900 on YSL’s e-shop.

According to Saint Laurent, the house’s ties to the rock world were cemented in 1971, when the founding couturier dressed Mick Jagger and his wife-to-be Bianca for their nuptials in Saint-Tropez. Slimane revived the tradition during his first stint at YSL in the late Nineties and made it a leitmotif of his fashion career at Dior Homme, dressing rockers including The Libertines, The Kills and Franz Ferdinand over the years.

The rock star campaigns are slated to break later this month in Les Inrockuptibles in France, followed by a range of music, art, culture and fashion titles with an alternative bent, including Monopol in Germany, Loud and Quiet in the U.K., Parkett in Switzerland and Dazed & Confused in Korea.