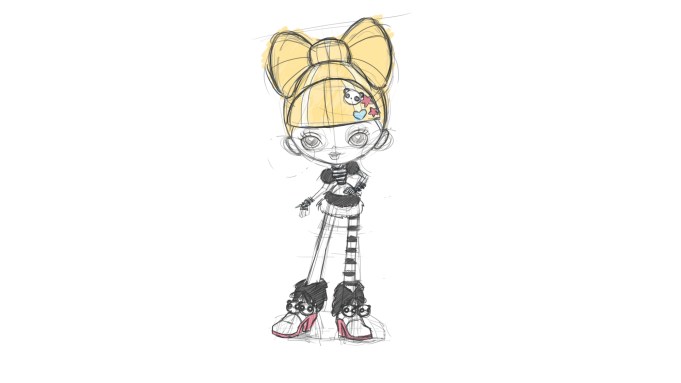 Gwen Stefani may be exiting her red chair on “The Voice” this fall, but she’s not staying away from the small screen.

Through a cartoon doppelganger, the platinum blonde singer is premiering an animated series called “Kuu Kuu Harajuku” on Nickelodeon next month. Introduced in Australia last year, the 26 episodes follow the adventures of Love, Angel, Music and Baby and their flaxen-haired leader known as G. Together as HJ5, the band effuses talent but also trouble. Even before the first note is played at a concert, they must fend off politicians who have no fun, aliens who are amped up on anger, monsters that are also cute pets and other characters that collide in a kaleidoscope of music, fashion and style.

Fashion plays a crucial part in the series that rolls out on Oct. 3. Resembling the offspring of a Blythe doll and an anime hero, HJ5 has panache for pairing miniskirts with high-top sneakers and girlie accessories shaped like stars, bows, hearts and teddy bears.

Constantly seeking inspiration from the street style and youth culture in Tokyo’s Harajuku neighborhood, Stefani spawned the Harajuku Girls while writing her first solo album, “Love. Angel. Music. Baby.” The Grammy winner used their initials to christen her contemporary fashion label as L.A.M.B. and also spun off a younger line called Harajuku Lovers. Prior to morphing into cartoons, the Harajuku Girls took the form of perky perfume bottles.

As cocreator and executive producer, Stefani gave her blessing to the debut episode, titled “Totally Teen Genie,” in which Angel releases a Teen Genie with attitude. The spunky girl tries to use her three wishes to help the band win a Totally Teen Awards Golden Hoodie trophy. Another story, called “Angel’s Flight,” also finds Angel determined to restore her reputation after an unflattering picture appears online.

G and her crew are sure to give a much-needed injection of hipness to Nickelodeon. Recognized for giving big breaks to ingenues such as Ariana Grande, Keke Palmer, Victoria Justice and Miranda Cosgrove in its live-action TV shows, the network’s most famous cartoon character wears a red tie and brown pants — SpongeBob SquarePants.