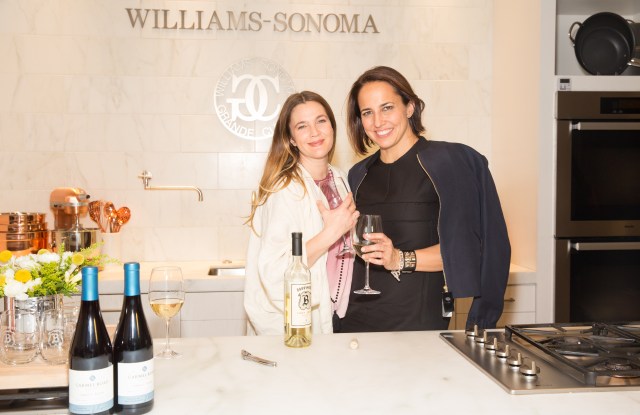 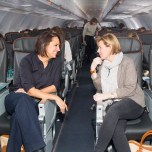 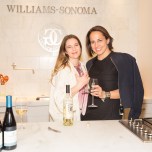 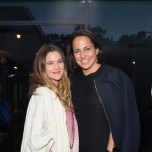 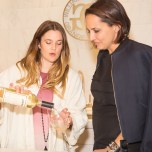 At a time when so-called women’s empowerment and the notion of feminism are trending topics, Anne Fulenwider wanted to do something a little different — and the idea started with getting a plane.

A year after hatchig the idea in the back of a taxi, the Marie Claire editor yesterday welcomed a group of 200-or-so powerful women to the aptly named “Power Trip,” which included chartering a Jet Blue flight from New York to San Francisco’s W Hotel for a 36-hour “pop-up” conference.

And that, really, was the point.

“I wanted women to get together who are powerful and have a good time — to do something truly memorable and for every one of us to meet at least two or three new, meaningful contacts,” Fulenwider said. And, she added, she had a small goal of redefining the women’s conference. It didn’t hurt that she found a way to concurrently take advantage of the cross-country there-and-back (for the New York people, at least).

Topics on the docket were focused mostly on the unique experience of being a woman at work, and conversations were both frank and funny.

Paltrow spoke pointedly on the polarizing decision to “put aside a perfectly reasonable acting career” to focus on her lifestyle brand, Goop.

“Being a woman who is trying to be slightly disruptive or change careers or assert herself in a way that might not be palatable is challenging,” she said. “I think it’s a fact of life that women face more scrutiny.”

Her reaction to what is often unfavorable public perception of her got laughs and applause from the crowd. “People like you how they know you, and it’s challenging for a woman to shift her shape into something else,” she said. “People were very cruel about me and what I was trying to do. You think, ‘This cant be about me. It has to be a projection — I am just selling some f—ing sweaters.’”

Oh, and that “conscious uncoupling” thing? She didn’t even know that was the title of the post. “It’s such a bizarre phrase, but the idea behind it is so powerful and positive,” she said. “At the time, my marriage was over and I was devastated and coping with that, and to have that global media onslaught — it was really a hard time.”

Paltrow wasn’t alone in discussing the unique vitriol that women often face in the public eye. Jennifer Hyman, of Rent the Runway, shared the unexpected result of a “take-down piece” that called her a “mean girl.” She said that although it was one of the most painful experiences of her career, it also helped to humanize her in front of her staff. And, she said, “the more that happens, the less there is to be afraid of. When my worst nightmare happened, it was freeing.”

Speaking of Mayer, Lopez, of Intel, and Dew, of Dell, spoke about Mayer’s edict that employees could no longer work from home, and the intense reaction that that garnered. Dew said that the problem that inspired the backlash wasn’t solved by a Draconian policy but rather by solving the culture problem among Yahoo’s employees. She did point out that the people who tend to get promoted are those who actually come in to the office.

These two tech execs also discussed the positive and negative impacts that technology (and particularly e-mail) can have on productivity and creativity. “In various levels at companies,” Dew said, “there is a victim mentality of ‘I am always answering email – I must be very important.’” To that end, she’s gotten “maniacal” about checking e-mail in limited quantities. She might be on to something; Banks shared that since being on maternity leave, she has removed e-mail from her phone.

Ross, in the final talk of the conference, addressed the concept and perception of feminism and her approach to portraying a more accurate character on ABC’s “Blackish.” For example, she said, she’d switch out a laundry basket for a laptop. She also shared her thoughts on the concept of beauty.

“As women, we are trained to look at ourselves through other people’s eyes,” she said. “But if you take the metaphor of dating, we’re always, ‘Does he like me?’ Well, I don’t know, do you like him?”

She added that her journey of self-acceptance could be chronicled through her hair. “When I let my hair do what it did, I gained a level of self-acceptance. We are so quick to compare ourselves to other people, and it’s a bummer.”

Ultimately, the tone of the event seemed one of candor and relief. Female venture capitalists could relax and enjoy being surrounded by other women, and founders like Banks, in addition to talking about tough decisions with her bourgeoning beauty business, could talk about the state of her Spanx. In a word, the attitude was authentic; or “flawesome, which is being awesome but having flaws,” Banks said.

This echoed a sentiment that Paltrow put forth earlier: “We are finally able to give ourselves and our friends the permission to be powerful and sexual and all these things that aren’t supposed to go together,” she said. “Right now is a very interesting time to be a woman.”