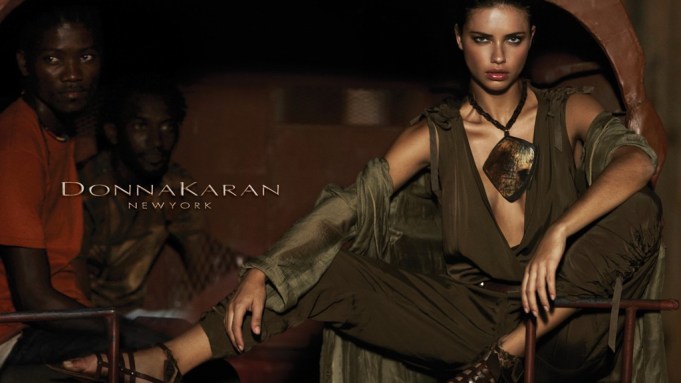 HAITI ON HER MIND: Donna Karan is clearly passionate about Haiti. She’s been spending much time on the island since it was struck by an earthquake in 2010, and has worked with local artisans on new designs. Haiti also informed her spring 2012 collection — particularly its black-and-white graphics inspired by Haitian artist Philippe Dodard — so it made sense for the designer to shoot the ad campaign there. Karan enlisted her photographer friend Russell James of collaborative art project “Nomad Two Worlds” to shoot the visuals, and tapped Brazilian model Adriana Lima, best known as a Victoria’s Secret angel, to appear in it. “I have never used her before, and I am totally in love with her,” Karan told WWD. “She shows the heart and soul of Haiti.”

Shot in the Southern Haiti town of Jacmel, several of the atmospheric images feature Lima in the Hotel Florita or on a “tap tap” taxi typical to Haiti. The campaign will break in fashion and lifestyle books in March, and the company is also producing a 16-page image brochure for consumers with more photos and details about the inspiration for the season and campaign.