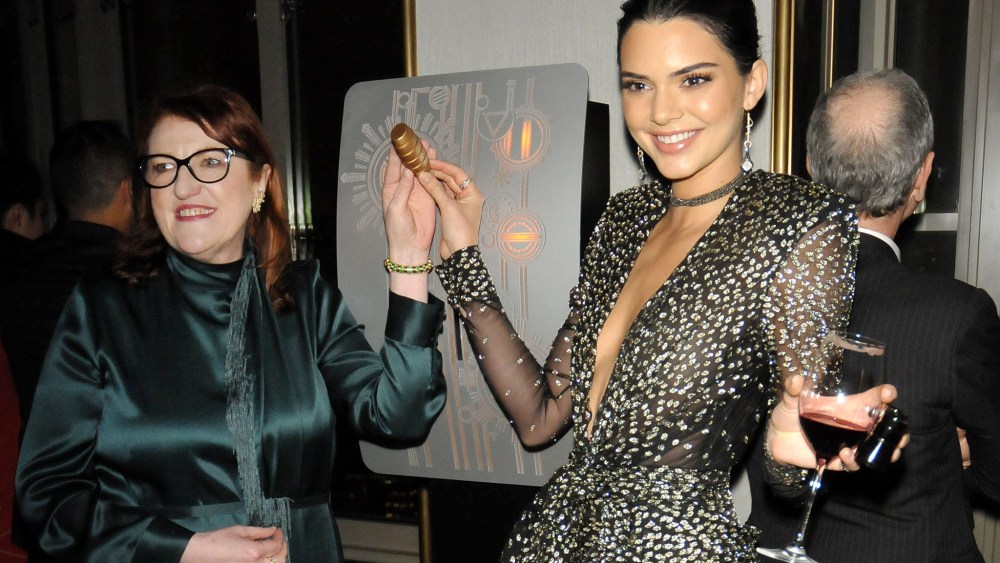 The Hearst-owned magazine projected images of its most celebrated covers and photographs on to the Empire State Building to commemorate its 150th anniversary, turning the city’s brightest symbol into a 1,454-foot-tall advertisement.

Fifteen blocks away, editors from Bazaar, executives from Hearst and a slew of models, designers, celebrities crowded into the Rainbow Room at 30 Rock for a viewing party cohosted by Tiffany & Co., which turned 180 this year.

From 65 stories above New York, Glenda Bailey, editor in chief of Bazaar, quickly counted down the seconds before Kendall Jenner flipped a mock switch that would illuminate the Empire State Building. Trailed by her mother, Kris, the model and reality star bypassed reporters on the red carpet earlier that night, eschewing questions about her role in Pepsi’s controversial commercial last week. But like the flip of that switch, Jenner had somehow gone from appearing in one of the worst ads of the year to taking part in one of the better ones.

“It took two years [to plan this]. A lot of negotiation, a lot of conversations,” Bailey told WWD. “What everybody is proud of is that this is a great opportunity for everyone to celebrate fashion and beauty on an American icon.”

The editor said she drew inspiration from a projection that the Wildlife Fund did with the Empire State Building years earlier.

“It’s so incredibly complex. You can’t believe what it takes to do this,” said Hearst Magazines president David Carey, who said talks even spilled into his vacation time with the family.

“Our fearless leader, David Carey, just said ‘My god, this is the biggest advertisement in the world,'” a pleased Bailey said with a laugh. “I’m hoping what people will enjoy is just the artistry. We do work with the very best photographers and artists in the world.”

“It’s 150 years. In an industry and a world where someone celebrates 10 years — 150 years is a long time and rightfully, deservedly in a big way,” said Gurung, who explained that the first story about his brand was in Bazaar.

“One of our first stories for the collection was in Bazaar,” Burch added. “It was so amazing to be included and that was 12 years ago.”

Rocha, who has modeled for various editions of Bazaar, recounted fun she had with stylists there who had to alter the hats for her head.

“I don’t know, I just have a really big head,” she said, noting the irony that most stylists want to shoot her in a hat. “They have to cut the hat and it mostly started at Harper’s.”

Rocha added that her relationships with Bailey and other editors at Bazaar have been helpful in steering her career.

“They have always been kind and very supportive,” she said. “For a model, you need that, especially growing up in this industry, you don’t always make the right decisions. Having those sorts of people who see it at every angle…it’s great to have their opinion.”