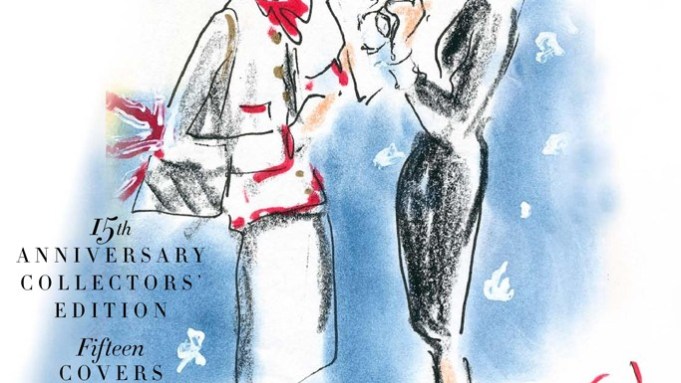 15 AND COUNTING: Hearst’s Harper’s Bazaar mother ship has been around for 146 years, but the Australian edition is a mere teenager — 15 years old next month. To celebrate the milestone, Harper’s Bazaar Australia editor Kellie Hush commissioned 15 front covers from as many fashion names for the March edition: Stella McCartney, Victoria Beckham, Diane von Furstenberg, Giorgio Armani, Christian Louboutin, Carine Roitfeld, Karl Lagerfeld, Calvin Klein, Lanvin, Gucci, Hermès and Louis Vuitton, as well as Australia’s Collette Dinnigan, Sass & Bide and Romance Was Born. With the exception of Roitfeld’s submission — a photo of Lara Stone by Kacper Kasprzyk, part of the debut spread by Roitfeld, Harper’s Bazaar’s new global fashion director, that will appear in the March editions of all 26 international editions — all the artworks are exclusive to Harper’s Oz.

Alber Elbaz, Louboutin, Dinnigan and Lagerfeld were among those who submitted illustrations — with Lagerfeld’s depicting a tête-à-tête between Roitfeld and Coco Chanel — while Beckham gaffer-taped a still of Cara Delevingne from the King & Partners-produced video for her new e-commerce site, and McCartney styled some cupcakes around a pair of her Happy Birthday Knickers. Tom Ford politely declined, citing paternity leave. Francisco Costa, meanwhile, had to go back to the drawing board after his first submission was rejected. Explained Hush, “He sent back something quite esoteric — a purple calla lily. It was simple, beautiful and very Calvin Klein, but I put it up on the wall alongside all the others and it just didn’t work.”

A total of 90,000 copies have been printed of the issue, which came out Monday. Bazaar’s Australian licensee, Bauer Media Australia, will be hoping the collector’s editions help boost the magazine’s visibility in a soft market that has witnessed double-digit circulation decreases at a number of Australian fashion titles. Bazaar’s circulation was down 3.6 percent to 52,520 in the 12 months to June 2012.