Fashion has never been more fluid, so why wouldn’t Harper’s Bazaar nab the Jonas Brothers for its first coverage of men’s fashion?

The Hearst-owned women’s fashion magazine (actually the first fashion magazine in America) last dabbled in men’s 50 years ago when it very briefly published a separate title, Men’s Bazaar. But the Aughts cultural power of the three Jonas Brothers reuniting a decade after their Disney-backed, boy-band days is apparently potent enough still to get a women’s magazine to cover, profile, video and photograph them for what Bazaar is calling “a special men’s issue” for its digital audience.

Joyann King, executive editorial director for Bazaar’s website who shepherded the idea and was on set for the shoot by photographer Eric Ray Davidson, said the site’s audience is actually about 30 percent male and that with all of the coed and genderless moments coming out of fashion these days “anyone will be inspired” by the looks Nick, Joe and Kevin serve up. But really, featuring three men who last performed together in 2008 is an appeal to the audience of mainly screaming teenage girls who are now in their late 20s and the core of Bazaar’s readership.

“We watched their new single ‘Sucker’ blow up on YouTube, it has [147 million] views now, and we all looked at each other like ‘Whoa. They’re back and it’s working,” King said.

She mentioned a couple of times what seems to be a mantra at Bazaar these days, “reader pleaser,” working with content that gets clicked on and engaged with and then planning around whatever does work. The Jonas Brothers seem like a pretty sure bet, not least because the two younger brothers Nick and Joe have high-profile actor wives in Priyanka Chopra and Sophie Turner.

“Honestly, I kind of geeked out when [Sophie] turned up on set in her bucket hat and a mini purse,” King admitted, alluding to being among the millions of rabid “Game of Thrones” fans.

King also noted that a video Bazaar did last year with Chopra got 11 million views, making it one of their most popular ever.

But whether or not Bazaar continues with the new Men’s Bazaar in future digital issues remains to be seen. The magazine is viewing this more as a one-off, for now, while its other new franchise of digital covers featuring women is planned for four a year. The if and when of future men’s covers and coverage will depend on the performance of the Jonas Brothers’ cover and what King and the editorial team glean from the numbers when they come in.

“It’s new and Men’s Bazaar is us embracing our freedom to create out-of-the-box online,” King said. 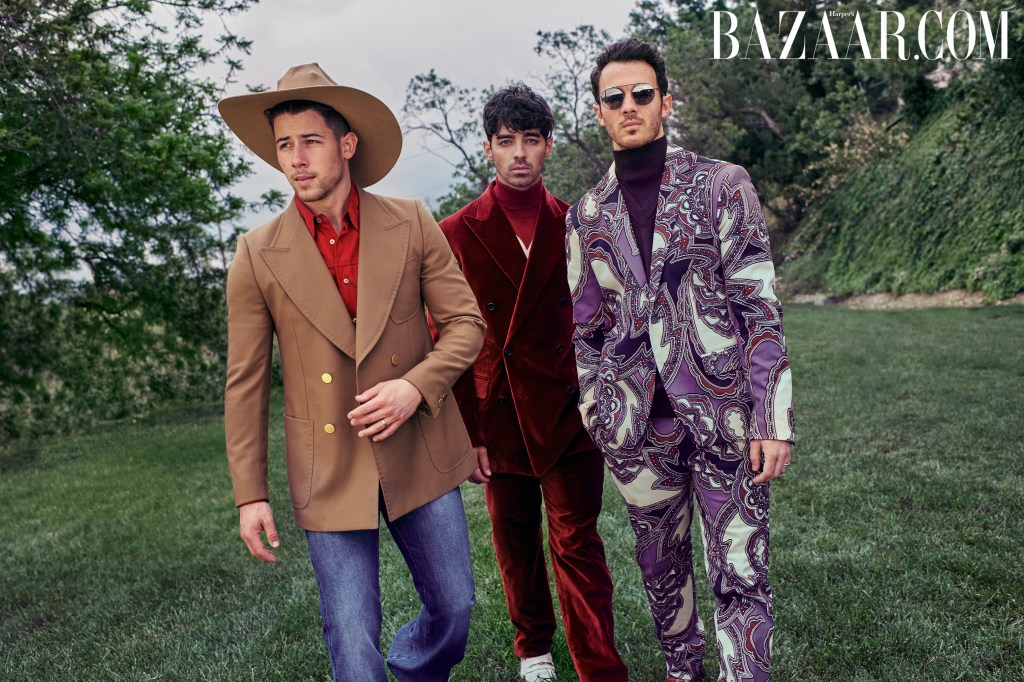 It’s also new for the brothers, who appear in some of their most fashion and editorialized photos to date. They’re no Ezra Miller, but it’s an evolution of sorts. They used to have flat-ironed bangs after all.

In his amusing profile, Jason Gay, who last profiled the group a decade ago for Rolling Stone, calls the guys “charmingly self-aware” in their older age.

“I love that we’re all in a place where we can laugh at ourselves,” Nick said in the profile. “We don’t take ourselves too seriously. We can acknowledge that we were once a little robotic and uncool. Now we’re just plain uncool — and we’re OK with that.”

Pride Month Starts With Out Magazine on Shaky Ground