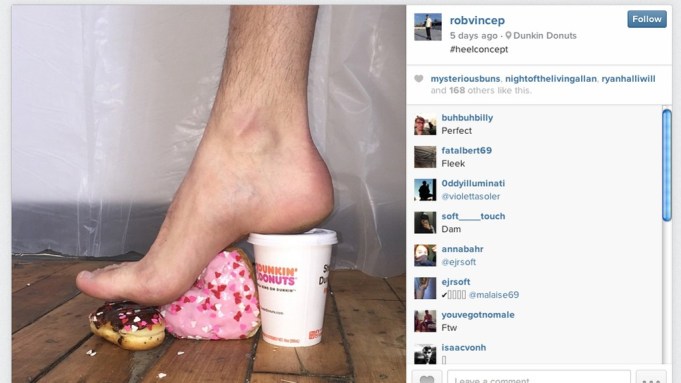 High heels have often taken the shape of extraneous objects: Roger Vivier had his “comma,” Charlotte Olympia her poodles and bird cages, and Karl Lagerfeld his smoking guns and lightbulbs for Chanel. But one male-driven social media trend, called “Heel Concept,” is taking that notion one step farther. Participants of the movement are using everyday objects —from doughnuts to water bottles — to build do-it-yourself-inclined sculptures underneath their feet, creating heel-like structures. The resulting photos are posted to Instagram with the hashtag #heelconcept.

Both highly visual and provocative, Heel Concept is already generating a strong response: Participation in the conceptual accessories trend has been doubling in popularity each day. At press time, there were more than 600 public heel concepts posted to Instagram — almost four times more than the 150 initial concepts WWD first witnessed at the middle of last week.

The trend’s viral appeal lies in its cocktail of commentary on fashion, gender and commercial ideologies — all the ingredients of a proper, highly visual meme. To fashion-enthusiasts’ delight, the heel concepts are also pushing aesthetic boundaries, making it easy to imagine these charged images — many flecked, unabashedly, by calluses and bits of leg hair — finding their way onto the inspiration boards of major footwear brands.

The meme was started six weeks ago by Misty Pollen — a 25-year-old transgender artist and textile designer based in Philadelphia who saw #HeelConcept as a way to express the concept of “personal adornment through the logic of social media,” she said, referring to Instagram’s often-illusionary nature.

Dissecting it further, Pollen said the meme “is like if Diana Vreeland invented planking,” referencing a past viral sensation in which participants would position themselves into a straight “plank” formation and post pictures to social media. “I think fashion nerds haven’t really had an online meme yet, necessarily, so it would be really exciting to me if that’s who embraced it,” she added.

Participants in the meme enjoy Heel Concept’s DIY component. Ulysses Pascal, a 25-year-old art fabricator in Los Angeles said, “unlike other memes where you have to go to a computer and use Photoshop to make something, with heel concept all you need is the stuff around you.”

Pascal said he also enjoys the “performativity” of the project and thinks it has enough potential to reach the highest stratospheres of celebrity meme-participation — akin to this past summer’s Ice Bucket Challenge. “I’d love to see Kim Kardashian do a heel concept,” he said.

But Vince Patti, a 22-year-old New Yorker who works as an assistant to the abstract artist Artie Vierkant, thinks that Heel Concept has a deeper cultural-tie in, noting: “I think this comes at a funny time when men are feeling more comfortable wearing heels and entering into that space of women’s footwear. The distinction between the two is starting to fall apart.” Just look at all the androgynous styles on the men’s runways in Milan and Paris for fall as proof.

Jake Levy, a 23-year-old L.A.-based stylist and avid Heel Concept participant, concurred. “I wish there were more heels for men, it’s so hard to find shoes I like in my size,” he said.