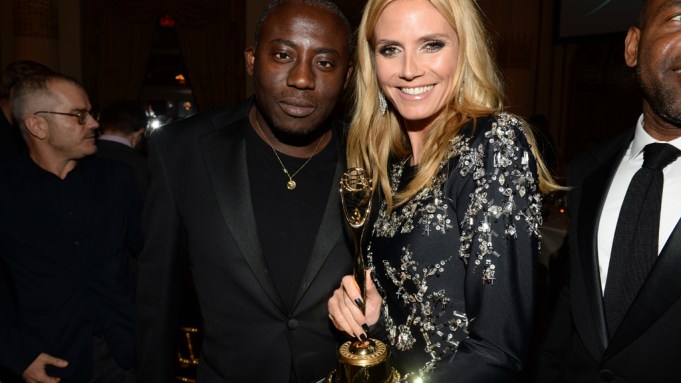 As a presenter at the second annual Clio Image Awards, held Tuesday night at the Plaza Hotel, Tim Gunn had done his homework. “I’ve been a teacher for many decades, but I’m always a student and I have an insatiable curiosity,” he said. “I did a little research about Clio, and found out that Clio was a Greek goddess, a mythological muse and she was the proclaimer and celebrator of great accomplishments and deeds.”

It was appropriate, then, that Gunn was on stage presenting the Honorary Image Award to a real life goddess of sorts — or at least a former Angel: Heidi Klum.

“I consider myself very lucky,” said Klum, accepting the award. “I came here from Germany and appreciate all the people who said ‘no,’ because that made me stronger. It made me get up the next day and be feistier and go to more castings. I love this roller-coaster ride. I love this industry that I’m in.”

Klum was one of the many representatives of the creative industry who had turned out for the ceremony, which was hosted by Andy Cohen. Among those who populated the Plaza’s grand ballroom: Patrick Demarchelier, who accepted the Lifetime Achievement Award; Jane Seymour; Tiki Barber; Peter Brant, and Vinoodh Matadin and Inez Van Lamsweerde. Then there was the table for W magazine’s Edward Enninful, who had called upon some of his famous friends — Jourdan Dunn, Lazaro Hernandez and Jack McCollough, Anna Ewers and Maria Borges among them — to help celebrate his win in the Excellence in Commercial Styling Award. Even the reigning queen model of the moment, Karlie Kloss, made a quick appearance post-dinner to congratulate the fashion director.

For her part, Lynn Hirschberg offered up a salacious story in introducing Enninful.

“Two years ago we were doing a shoot with a pop star who shall remain nameless, except for the fact that it’s Nicki Minaj,” she said. “We were superexcited about shooting Nicki Minaj, which may have been our first mistake. It was an example of how Edward can be brilliant — he envisioned the pictures before the pictures were taken. He called in clothes from around the planet…and then things went terribly wrong. Nicki hated the makeup, barricaded herself in the bathroom, took all the makeup off, and the makeup artist quit. She got in a fight with the manicurist, so the manicurist quit. Her two bodyguards told the photographer, ‘Do you have to be here?’ We got her the salad she requested and she didn’t like it — she only likes iceberg lettuce. It was a nightmare, but in spite of all of this, Edward made some of the most beautiful images the magazine has ever published. And that’s the genius of Edward.”