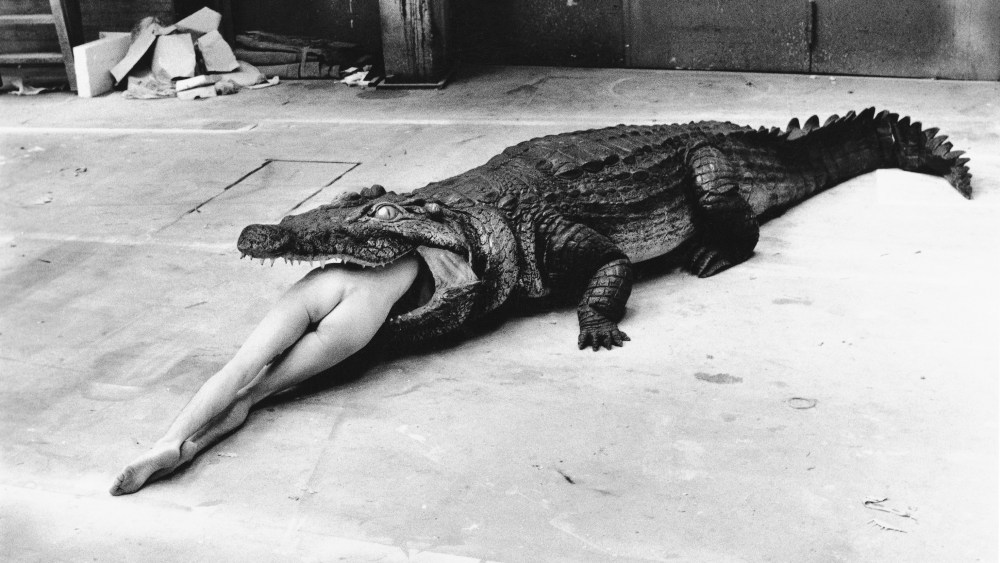 True to his controversial portfolio, Helmut Newton’s career is just as provocative in a new documentary.

Bowing today virtually, ”Helmut Newton: The Bad and the Beautiful” offers a behind-the-scenes view of the lensman at work, interspersed with commentary from many of the bold-faced names he worked with. Divisive in life, his photos and their respective back stories remain thought-provoking or repulsive, depending on the audience, more than 16 years after his death at the age of 83 following a car accident in Hollywood.

Insistent about his artistic freedom, Newton’s voluminous archives include images of a naked woman lying in the mouth of a crocodile, another half-stuffed in a garbage bag on a rocky beach, a raw butcher shop chicken wearing high heels loaned from the doll museum in Paris and a teenage Claudia Schiffer ignoring his temptation of a piece of candy. In the 90-minute documentary from Kino Lorber, Newton advises a naked model smoking a cigarette shadowed by the Marlboro Man billboard on the Sunset Strip, “There is a kindness to your look. That is the last thing I want.”

Isabella Rossellini, one of the high-profile Newton devotees featured in the film, said, “Whether you work with David Lynch or Helmut Newton, they’re not photographing you. They’re photographing an idea that is in their heads and you are the vehicle. So you have to make yourself available or say, ‘No.’”

More than anything, “The Bad and The Beautiful” strives to portray Newton as a free thinker who loved women (he says so in one clip) and controversy. In the documentary, Vogue’s Anna Wintour reads from a grateful fax sent by Newton after the aforementioned heel-clad chicken shoot. “‘Look forward to the readers’ letters.’ He lovvved to hear about the readers’ letters — the worse they were, the better. As Kaiser Wilhelm II said in 1914, ‘More enemies, more honor.’”

Thorough in his craft, despite his father’s belief that taking photos was a weekend hobby not a career, Newton apprenticed with the photographer Yva. He notes in the film how “the great master” photographer Brassai influenced his approach to lighting. Effort was essential to Newton, who quipped on location, “Everybody remembers a bad picture. No one remembers the pain that everybody went through to get a good picture.”

Love them or loathe them, Newton’s racy and debatable photos exist. The documentary’s director Gero von Boehm told WWD, “These pictures are there and nobody is forced to look at them. It’s very dangerous to have a dictatorship of taste. This I am really afraid of. This should not be. We are overly politically correct. I understand every viewpoint, but everything has to be visible. It’s very important that things are visible. And the freedom of art is important. That’s why those pictures should be there and be seen.”

Asked about a Newton-shot magazine cover of a naked Grace Jones with chains around her ankles and another dominatrix-inspired photo of Schiffer standing with a whip as a kneeling maid puts her head in an oven, von Boehm said, “Nobody would print that any more. It’s not politically correct, but it’s Helmut humor.…Grace Jones saw it more as a sexual fantasy [referring to her explanation in the documentary]. Now we see it differently. I swear to you this photo couldn’t be done today. At the time, there was freedom. People didn’t care very much about political correctness. The term didn’t even exist. We have to see them as historical pictures actually.”

Newton was a contradictory character, who was “the combination of a boy from Berlin and also a real gentleman from the Jewish bourgeoisie of the Weimar Republic,” von Boehm said. “At the same time, he was a big provocateur, an anarchist and a great artist. He didn’t want to be called an artist, by the way. He didn’t like the word. ‘I’m Helmut. I’m not an artist. What I’m doing is not art. I’m just taking pictures.’ That’s what he always said.”

In 1938 at the age of 18, Newton fled his hometown of Berlin and traveled to Asia and later to Australia. After starting his career in London, it really took off in Paris, thanks largely to French Vogue. Living between Monte Carlo and Los Angeles, Newton was “constantly working, working, working,“ the director said. “He was absolutely obsessed. This is a story for a film. It’s a bit Hollywood, but I prefer documentary to fiction. I shot a lot with him in his life. I always thought his pictures and his personality needed the big screen.”

Beyond the beautiful essays and intellectual, analytical texts by curators, gallerists and art collectors, there weren’t any statements about Newton by women, so the director set out to change that. Jones, Rossellini, Schiffer, Charlotte Rampling, Marianne Faithfull, Nadja Auermann and Carla Sozzani were among the Newton fans who obliged. Unlike his many critics — who included the late Susan Sontag, who has a testy exchange with him about misogyny in the film — these women enthuse about his work.

As for how his jarring imagery may be received, von Boehm said, “Most of his pictures have to be re-seen in the context of the time, when they were taken. The sexual liberation had just happened at the end of the Sixties. That was his big time. The naked body was no longer taboo. Also, everybody was waiting for a revolution in fashion photography. At this time, feminists were against this development. The sexual revolution and the revolution in fashion photography came together.”

Coming of age in Germany between the two World Wars, the plethora of Nazi imagery influenced Newton’s photography, said von Boehm, citing how he played with shadows and photographed women from below. Suggesting there is some truth to Rossellini’s claim that Newton photographed women similar to how Leni Riefenstahl pictured men, von Boehm said the two photographers were friendly at the end of their lives. “They wrote letters to each other. They met. He hated her and he admired her photography in a way.”

Newton’s camera was a source of protection at times, his wife and collaborator June said in the documentary. She recalled overhearing two nurses en route to a hospital operating room. “One nurse said to the other, ‘What does he think he is going to do with the camera?’ The other replied, ‘He thinks he’s going to take photographs of himself,’” and the pair roared with laughter. (Newton of course did.)

Newton could also be disarming about his own personal life and body of work. One clip captured him surveying the installation of a joint photography exhibition of images he and his wife took of each other. Concerned about exhibiting such intimate shots, including nudes, Karl Largerfeld cautioned Newton, “Are you sure, Helmut?” He was and in the end Lagerfeld liked it as well, said von Boehm, who made two films about the late fashion designer. “Karl and Helmut were very friendly. They had the same sense of humor, a little bit sarcastic at times,” he said.

Despite having become fast friends after meeting at a dinner party in Paris in 1997, Newton was not always the most willing documentary subject for the just-released film. “Photographers don’t like to be filmed, so he was biased about it,” von Boehm said goodnaturedly.

However complicated and controversial Newton’s photographs could be, he maintained a playfulness, as evidenced by the many snippets of the jaunty photographer on set, jesting with the models, dancing uninhibitedly and mugging for the filmmaker. Critics’ insistence that Newton was a misogynist was off base from von Boehme’s point of view. “They think he was simply a macho and that’s why he photographed women in those poses. No, it’s not true. He wanted us men, and also women, to know how strong women are.”

Auermman, for example, refused to be photographed nude and subsequently did not work with Newton for a year or two. In the film, she addressed images of her appearing to be disabled — in a wheelchair in one shot, with a prosthetic leg in another and struggling up a set of stairs with two canes and the assistance of two male assistants. She implied the photos were more about how stilettos immobilize women. Newton’s Vogue photograph of her outstretched on a bed embracing a stuffed swan (borrowed from a natural history museum) led to complaints of animal cruelty and promoting sex with animals. What they missed, the model said, was an homage to the mythological story “Leda and the Swan.”

Noting several times that Newton was not a womanizer or the epitome of macho, von Boehm said his work was more complicated than that. “Women in his photographs are often objects, which is totally banal, because everything in front of a lens becomes an object. Men, who are attracted to women then resent women, because they make them vulnerable. This is an interesting thought. The vulnerability of men towards women is absolutely intolerable. Then they say, ‘Go away. I’m afraid of you.’“

That ideology reveals a whole culture, according to von Boehm. “You can call it a macho culture. If Helmut partially represented that culture, why not? What’s wrong about that? It exists and thank God artists were able to express it,” he said.