Tim Walker shot Cara Delevingne against a backdrop of mossy rocks, rolling hills, and clumps of heather — all lit by the rare Scottish sunshine. 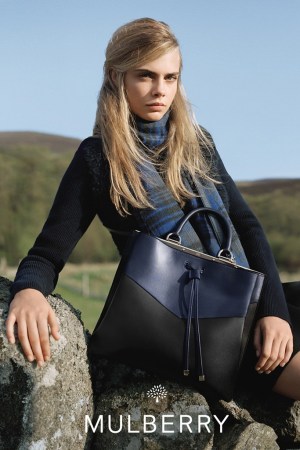 HIGHLAND HIGH: Team Mulberry took to the Scottish Highlands for its fall ad campaign, which was shot by Tim Walker and features Cara Delevingne against a backdrop of mossy rocks, rolling hills, and clumps of heather — all lit by the rare Scottish sunshine. “Big space, fresh air, wind in the hair, away from it all.…Mulberry is a brand that is at home in town and country, and we wanted to capture that feeling,” said Anne-Marie Verdin, Mulberry’s brand director. “When we arrived in Scotland, it was pouring with rain, but once Tim arrived this golden sun appeared.”

This story first appeared in the July 1, 2014 issue of WWD. Subscribe Today.

The ready-to-wear on show is inspired by traditional British cold-weather gear, and includes short kilts, argyle and Aran-inspired knits, lots of plaid and warm woolens. Accessories include slip-on brogues, Wellington boots with buckles at the side, the Tessie and Bayswater Buckle bags, as well as the Delevingne-designed backpacks. Creative directors were Ronnie Cooke Newhouse and Stephen Wolstenholme at House and Holme, with styling by Edward Enninful. The ads will break in the September issues of titles including British Vogue, Harper’s Bazaar and Elle.