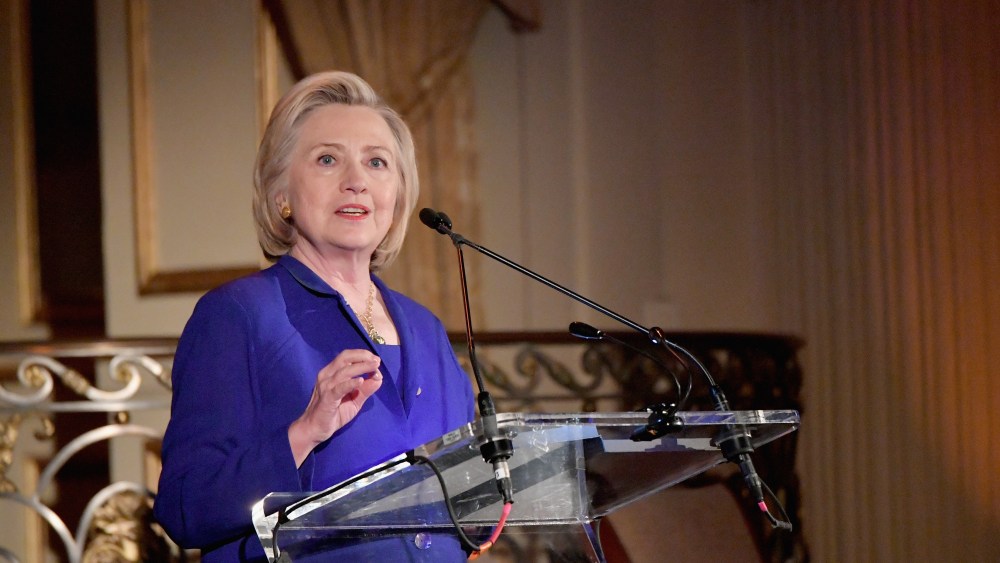 Former Secretary of State Hillary Rodham Clinton sharply criticized the Trump administration’s zero-tolerance immigration policy during her keynote address at the 2018 Elly Awards luncheon at The Plaza hotel Monday, which honors women leaders and benefits the Education Fund of The Women’s Forum.

“What’s happening to families at the border is horrific,” Clinton said. “Nursing infants being ripped away from their mothers, parents being told their toddlers are being taken to bathe or play, only to realize hours later they aren’t coming back. Children incarcerated in warehouses and, according to one account, kept in cages. This is a moral and humanitarian crisis. Every one of us who’s ever been a parent, or grandparent, an aunt, a big sister, any one of us who’s ever held a child in our arms…every human being with a sense of compassion and decency should be outraged,” she said.

Clinton said she warned about this at the debates and on the campaign trail.

“That Trump’s immigration policies would result in families being separated, parents being sent away from their children, people being rounded up on trains and buses. Now as we watch with broken hearts, that’s exactly what’s happening,” Clinton said. “This is not happening because of ‘Democrats’ law’ as the White House has claimed. Separating families is not mandated by law at all. That is an outright lie. It’s incumbent on all of us, journalists and citizens alike, to call it just that,” she said.

Discussing other topics related to the event, Clinton noted with the help of the Women’s Fund, which has awarded more than $1.4 million to 200-plus women, recipients have been able to finish their educations and thrive in their careers. The Education Fund Fellows, who are age 35 and older, have faced challenges in their lives such as domestic violence, substance abuse and incarceration. “It’s not just the financial support that makes a difference, as essential as that is, it’s having this group of successful, determined women in their careers. That’s why the mission of the [Women’s] Forum remains so vital,” she said.

Clinton recalled what she said in Beijing in 1995, “that the full participation of women and girls is the great unfinished business of the 21st century.” She noted women are knocking down barriers and making strides in their careers and representing the highest levels in so many fields from finance to fashion, from STEM to sports, and from academia and arts.

“We have seen progress in our lifetimes. There’s a woeful lack of women in the upper reaches of science and technology, business and financial, not to mention politics and government,” Clinton said. “Across the private sector, women, particularly women of color still struggle for representation in that c-suite and the boardroom. They receive only a fraction of the venture capital that men do, so thank you Sheila [Johnson] for providing WE Capital and providing more women the chance to get ahead. And we‘ve been reminded in recent months, the scourge of sexual harassment still prevents too many women from achieving their full potential.”

In addition to Clinton, Monday’s event honored Deirdre Quinn, chief executive officer and cofounder of Lafayette 148, and Sheila C. Johnson, founder and ceo of Salamander Hotels & Resorts and vice chairman of Monumental Sports and Entertainment, cofounder of WE Capital and founding partner of Black Entertainment Television. She was recognized in 2015 by Forbes Magazine among the Top 50 America’s Richest Self-Made Women.

In introducing Quinn, Dr. Joyce F. Brown, president of Fashion Institute of Technology, said, “Do not be fooled by Deirdre Quinn. She may be quiet, unassuming and she may shy from the limelight, but my dear friend Deirdre Quinn is in fact a force of nature.” As one of nine children, she said Quinn became the living personification of her father’s favorite quote, “A Quinn Never Gives In.” Brown noted that Quinn has an appetite for hard work, held several jobs and put herself through fashion college before cofounding Lafayette 148. “I think the picture emerges, independent, entrepreneurial and determined,” Brown said.

“This quiet self-effacing woman is a world-class risk taker,” said Brown, noting 22 years later, Lafayette 148 thrives. One of the company’s great accomplishments is opening the School of Dreams in Shantou, China, a free elementary all-day private school for the students of Shantou where Lafayette 148’s state-of-the-art factory is based.

Kay Unger, fashion designer and philanthropist introduced her friend, Sheila Johnson, who has had three highly successful acts: The first being a concert violinist, the second starting Black Entertainment Television, and the third founding Salamander Hotels & Resorts in Virginia, which now has seven luxury properties. “Perhaps the most challenging was a really successful second marriage,” quipped Unger.

Unger said Johnson “has changed the lives of scores of at-risk youth, she sponsors the Parsons scholarship programs, and through Sheila Johnson Harvard Fellows, Harvard will have launched 50 Fellows armed with Masters’ Degrees.”

During an on-stage conversation with TV journalist Paula Zahn, who also happens to be a professional cellist, Johnson said the secret to her success was her background in the arts. Quinn attributed her success to the people she’s surrounded herself with, and said without them, she couldn’t do her job.

When Zahn asked why only 32 women were running Fortune 500 companies, Johnson said, “I just think that inherently men do not believe women can do much at all. It’s been something that I have fought all my life. In everything that I’ve done in life, I’ve always felt this thumb of suppression. Once I started my third act in my life, I felt it was the first time I was able to blossom and to find out who I really am.”