On Monday the Swedish retailer confirmed to WWD that the indie chanteuse will indeed be the global face of the campaign — with a second one planned for winter. 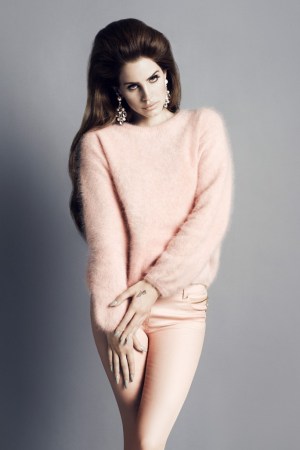 H&M’s TORCH SONG DUET: Speculation about indie chanteuse Lana Del Rey fronting H&M’s fall fashion campaign reached a fever pitch in June, but the Swedish retailer has remained mum on the subject. Until now. H&M on Monday confirmed to WWD that Del Rey will indeed be the global face of H&M’s fall advertising — with a second campaign planned for winter. Del Rey’s retro look — Sixties-inspired minidresses and long “ironed” hair has invited comparisons to Priscilla Presley’s early days with Elvis. It has not gone unnoticed by the fashion industry. Mulberry named a handbag after the singer and she was signed in January by Next modeling agency; Del Rey landed on the cover of Vogue in March. The H&M gig is her first modeling job.

“The mood is very L.A. noir,” said Donald Schneider, H&M’s creative director. “It’s inspired by our fall collection.” Looking like a Fifties screen siren in one ad — the print campaign was photographed by Inez van Lamsweerde and Vinoodh Matadin — Del Rey wears a pale pink angora blend sweater. Del Rey performed a cover of “Blue Velvet” for a minifilm that will be released on hm.com on Sept. 19 and subsequently distributed globally. Edited versions will be used as TV commercials.