Artistic director Franck Durand and fashion journalist Marc Beaugé are behind the revival of the title. 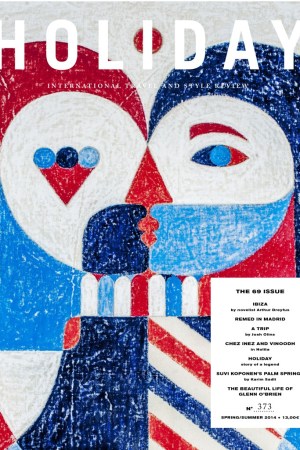 FASHION HOLIDAY: Holiday, the American travel magazine that had its heyday between the Forties and Sixties, is returning with a fashion vibe and a Paris home.

Artistic director Franck Durand and fashion journalist Marc Beaugé are behind the revival of the publication, to be published biannually in English.

“We kept the essence of the magazine, its quest for aesthetics,” said Durand, 44, whose art direction studio has executed campaigns for fashion houses like Isabel Marant, Balmain and De Fursac.

“Under the artistic direction of Frank Zachary in the heyday, the magazine was rich,” Durand explained. “We are doing it in a more artisanal way. But both ends allow a great spirit of freedom.”

The theme of the new issue launching this month is the number 69.

Features include a story on street artist Remed (with one of his paintings on the cover), a piece on Inez Van Lamsweerde and Vinoodh Matadin’s loft in Nolita and another on Aston Martin with a photograph by Hedi Slimane.

The duo plans to develop the brand by selling objects — starting with a candle and T-shirts — and opening a café in Paris’ chic 16th arrondissement next year.

Circulation for the first issue is 25,000 copies. Copies are to be distributed in around 800 points of sale internationally, including select bookstores, shops and newsstands. Distribution includes Colette and the WHSmith bookstore in Paris and the Around the World shop in New York.

The cover price is 13 euros, or $18 at current exchange. The first issue contains 152 pages, including 23 pages of advertising from Miu Miu, Isabel Marant and Dior Homme, among others.