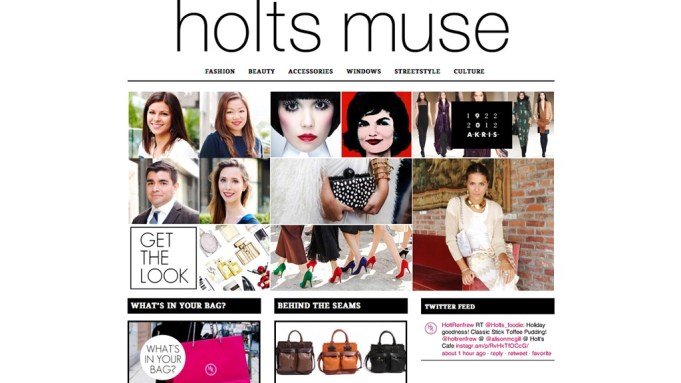 For a 175-year-old, Holt Renfrew navigates social media like a teenager.

The retailer has spent the past year carefully building its social media presence, with a primary goal of reaching a younger demographic.

Canada’s leading luxury retailer, with nine doors spanning the country from Toronto to Vancouver, wants to make sure its digital message is in line with its overall mission: providing customers with an extraordinary experience.

“Our whole marketing strategy is integrated across all channels — from digital to social media to print,” said Holt’s senior vice president of sales and marketing, Alix Box.

“We always want to be current and relevant, and [this means] getting on board with new platforms — but in a way that fits in with our marketing strategy,” Barkwell said.

Box reinforced that it’s all about welding this to the in-store experience.

“That is our differentiator. We work hard to make sure that we’re focused on the customer and speaking to them the way they want to be spoken to — whether it’s digital or in-store,” Box explained.

Detailing the store’s multipronged approach, Box said the program, which was put in motion in early September for the store’s 175th anniversary, features an online and social media campaign, Hot@175. It integrated all aspects of digital, print, visual, events and in-store, including a street party in Toronto that took place Sept. 6. The store’s overall messaging for the milestone was slightly retro, with a nod to the retailer’s rich history, but also to “assert our strong fashion leadership going forward.”

The element of the celebration that was most geared toward the social space was a Holt Renfrew pop-up truck that drove across the country selling Hot@175 sweatshirts, hitting each of the nine cities where the retailer has a store. According to Barkwell, seven designers and artists were commissioned to design sweatshirts that featured their own interpretation of what it means to be Hot@175. The campaign was promoted on social media through Twitter, Facebook and Instagram with the hashtag #HoltPopUp with updates throughout, and each designer starred in a corresponding video that was shared across various digital media, as well.

“The staff that traveled said that the people who came [to the pop-up truck] heard about it through social media. It was a great test to see how this reaches our customers of a younger demographic. It really drove them to the trucks and got them shopping,” Barkwell said, adding that shoppers who purchased from any of the trucks received an additional promotion to drive traffic back to the store.

From Aug. 24 to Sept. 30, the #HoltPopUp hashtag reached more than 50,000 Twitter users and 80,000 Facebook users. The posts relating to the trucks on holtsmuse.com garnered more than 10,000 unique page views.

Barkwell said the store really wanted to create a lot of buzz upon the launch of the Holts Muse blog last November. The retailer tapped blogger Leandra Medine of the Man Repeller to host a party at the Toronto store, and in its first month the blog saw 45,000 hits. Since then, Holts Muse has continued to partner with leading bloggers, including Emily Schuman of Cupcakes and Cashmere, as well as designers like Victoria Beckham (whose video interview received 28,000 hits on YouTube), Tabitha Simmons, Rachel Zoe, Rag & Bone designers David Neville and Marcus Wainwright, Bruno Frissoni and Aerin Lauder.

Most recently, Holt Renfrew worked on a charitable partnership with Missoni and OrphanAid Africa. As part of that, two stuffed animals — a bear and elephant — were created in the brand’s signature zigzag print that hit stores and holtrenfrew.com Nov. 1. The retailer has yet to offer e-commerce for its full range of product.

Margherita Missoni visited the retailer’s Bloor Street location in Toronto last week to kick off sales of the $50 limited-edition toys, with all net proceeds going to OrphanAid Africa. The goal is to raise $100,000.

The campaign — which includes in-store elements, print, video, the Missoni event and online components — features a Facebook contest in which the winner is eligible to win a signed stuffed animal and $350 worth of Missoni accessories.

There’s even a guerrilla element that started in Milan during fashion week when the store’s vice president of fashion direction, Barbara Atkin, started taking pictures of the Missoni bear engaged in classic Italian activities (like perched atop a Vespa), chronicling the trip back to Canada. Since then, the store has posted images of the bear at various Canadian landmarks, such as the Ironworks building in Vancouver’s Gastown area, Mount Royal in Montreal, the CN Tower and the Royal Ontario Museum in Toronto. Barkwell added that consumers have started doing the same with the bear and posting the photos.

When asked which social media platform garners the most engagement with fans, Barkwell insists there is no one leader. Different types of content are promoted on different channels — for instance, while Instagram might be best for promoting product as it arrives in-store because of the platform’s visual properties, Facebook is more suited for sharing blog and editorial content.

“That’s part of our marketing strategy — using different platforms for different purposes to create the overall experience. That’s a way that we distinguish ourselves. We have a very integrated approach, and we try to incorporate social media into public relations and traditional marketing channels,” Barkwell said, adding that its Web site holtrenfew.com — which gets about 300,000 visits per month — has a portion on the site that directs readers to its blog.

This month, though, the retailer appointed Lisa Tant to a new fashion editor role. As part of the marketing division, the former editor of Canadian fashion magazine Flare will focus heavily on collaborating with social media programs.

Holt Renfrew was one of the earlier retailers to embrace bloggers. Its first blogger project dates to 2009, when the retailer rolled out a national campaign with windows celebrating bloggers like The Sartorialist’s Scott Schuman, Garance Dore, Jane Aldridge, Bryanboy and Tommy Ton (who once worked at the Bloor Street store). Schuman hosted a party in honor of this campaign at the store, where his work was exhibited, and he also spoke at a cocktail event.

Despite a strong digital presence and an early adoption to the blogosphere, though, Holt Renfrew is still neither e-commerce nor m-commerce enabled. Box maintains that its sister retailer — U.K.-based Selfridges — has taken the lead with e-commerce plans and no update was available at press time.

However, holtrenfrew.com did see a complete overhaul in mid-August, when a slew of features were implemented. Besides the ability to post richer content, more than 1,000 products across numerous categories were launched on its digital flagship, something Box contends wasn’t possible on the old site. Consumers also have access to robust product catalogues, alternate product views, designer look books and videos and integration to blog content and the Holt Style Guide.

“The bottom line is that it gives customers more to look at and see our breadth and depth of assortment and find what they want,” Box said. “It’s a great window-shopping experience, which was our goal.”