"The Hilfigers," a fictional all-American family, are settling in at home in Tommy Hilfiger's fall-winter campaign. 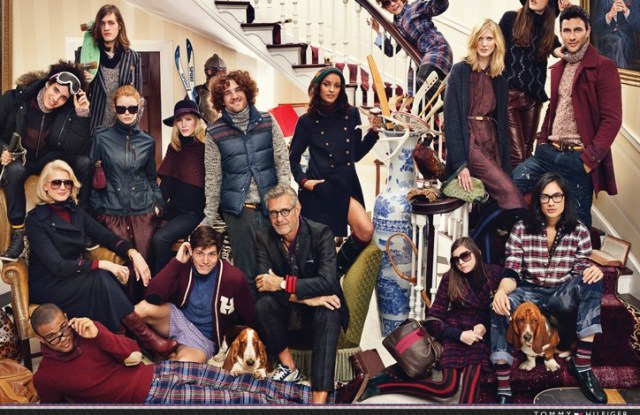 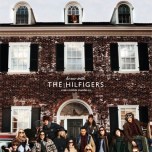 HOMEBODIES: After stints at the country club, a Thanksgiving picnic and a tailgate party, the Hilfigers, a fictional all-American family made up of eclectic characters, are settling in at home. Tommy Hilfiger’s fall-winter ad campaign features the extended family coming home from college (some prematurely) and from the hairdressers, as well as dining in bed, having pillow fights and hanging from the chandeliers. The ads were photographed in Old Westbury, N.Y., by Craig McDean, styled by Karl Templer and creatively directed by Trey Laird of Laird + Partners.

“The fall campaign captures the magnetic draw that everyone can relate to — home,” said Tommy Hilfiger. “For two seasons we’ve seen the Hilfigers travel; now we have the chance to peek into their everyday lives and see how they define home sweet home.”

Avery Baker, executive vice president of global communications and marketing, added, “The Hilfigers will continue to have significant visibility around the world through a mix of print, outdoor and digital media. Our global advertising investment behind the fall campaign is on par with the previous year’s launch efforts. We have seen tremendous response in every market to ‘The Hilfigers,’ so our priority is to ensure maximum exposure for their continuing story.” Last year Hilfiger reportedly spent around $50 million on the launch campaign.

Print ads will appear as multipage inserts in such magazines as Vogue, GQ, Vanity Fair, InStyle and Harper’s Bazaar. An outdoor campaign will be mounted in New York and key European cities such as Amsterdam, Brussels and Zurich. Tommy.com and the brand’s Facebook and Twitter channels will also highlight the campaign.

GQ GOES E-TAIL: GQ is set to test the waters of e-commerce via a partnership with Park & Bond, the new full-price men’s site from Gilt Groupe Inc. that will launch later this summer. Park & Bond will operate a GQ boutique on its main site, selling product chosen from the pages of GQ by its editors. The initial deal is for the six months from September to February.

“This is a natural partnership for us, and a great way for us to get our feet wet in the world of e-commerce,” said GQ editor in chief Jim Nelson.

GQ will select about a dozen fashion items a month to feature on a dedicated microsite on gq.com, which will link to the boutique at Parkandbond.com. The e-tailer will handle the logistics of selling and shipping the product.

An exact date has yet to be determined for the site to go live. The selected items will be designated in-book as well as compiled on gq.com, directing readers to shop the boutique on line.

“It was important to us to maintain the editorial integrity of our fashion pages,” said Michael Hainey, deputy editor at GQ. “We have a very clear central mission to create a magazine and produce great journalism, but like all of us in publishing we are looking at other business opportunities.”

GQ will receive a revenue stream from the deal but both parties declined to spell out the nature of the business relationship.

The new partnership echoes a previously formed one between Esquire and Clad, a men’s e-commerce site owned by J.C. Penney Co. Inc. that will also launch later this summer. Esquire’s editorial team is curating product on that site and will link some product on esquire.com to Clad.

“Park & Bond will be the ultimate resource for men’s retail, and who better to join forces with than GQ, the indisputable authority on men’s style for the past 50 years,” said John Auerbach, president of Park & Bond.

GOLDSTEIN JOINS W: W’s newly constructed fashion team is expanding a bit more: Stylist Lori Goldstein is joining the magazine and will become style editor at large. Goldstein will work alongside fashion and style director Edward Enninful, who was hired six weeks ago, and creative director Alex Gonzalez, who was brought on in February.

Goldstein has been something of a free agent for years, but said that taking a title on a masthead and “being more of a part of a magazine, which is something I’ve never done, is very exciting to me.”

“What’s so great about what I’m doing in being style editor at large it’s kind of like I get to encompass everything I love to do,” she said. “I’ve always been one of those people that goes back and forth in this business in different ways, so I get to really do great fashion stories with Edward and I’m also going to be working with [editor at large] Lynn Hirschberg and bringing fashion into the element of the actors that we shoot and kind of being the thread through all the different areas.”

And considering Goldstein’s Rolodex, does she have a shot of bringing in a photographer like Steven Meisel regularly into the W fold? “We will see,” she said, coyly.

LOOK IT UP: For anybody unclear on the difference between a Crombie and a Covert overcoat, a new book spells it out.

“Icons of Style,” written by U.K. fashion journalist Josh Sims, provides an encyclopedic take on the classic pieces of a man’s wardrobe. From the bomber jacket and the denim jean to the dinner jacket and the necktie, Sims details the history of the iconic items in simple terms. Each entry is illustrated by photos of celebrities such as Fred Astaire and Frank Sinatra sporting each look.

“Men tend to be much less interested in fashion for fashion’s sake and much more excited about the detail of a garment — how it is made, why a button is in this place and not that one, and also the product’s history — how did it get to be the way it is,” Sims said. “It’s these historic pieces that still form the basis of the male wardrobe. So it seemed like a good idea to go back to first principles and find out about those manufacturers who made the first of a kind — the product that became the template for something that has since become generic.”

Sims, who has worked for The Face and Arena magazines, expects the book to appeal to “anyone with an interest in history, but its key readership is bound to be men with an interest in what they wear. There are lots of books telling them ‘how to wear it,’ maybe this one will help explain ‘why they wear it,’” he said.

The book, which will be sold internationally, will be available this month for $29.95. It is published by Lawrence King Publishing of San Francisco.

TOASTING OLIVIER: Olivier Theyskens and Theory’s Andrew Rosen have regular dinner dates at Wallse, a Viennese restaurant a few blocks from Theory’s headquarters in Manhattan’s Meatpacking District. It was during one recent meal that they came up with a plan to show Theyskens’ premiere collection, as seen through the eyes of magazine editors. It wasn’t long before Rosen put in a call to Elle’s creative director, Joe Zee. “I saw his first collection years ago and I have to say, Olivier has become so open minded,” Zee said over eggplant and penne pasta in the wine cellar of Macelleria on Tuesday night, to celebrate the partnership. “Usually designers have very specific ideas as to how their collection should be shown in the magazine. He gave us total freedom.” The collection is available now on elle.com.

“I’d never worked with a stylist before so it was really interesting to see how they put things together,” said Theyskens. “Every editor did something completely different from the next.” Theyskens and Rosen played musical chairs at the dinner, chatting with fashionable crowd that included Joseph Altuzarra, Elle editor in chief Robbie Myers, Stacey Bendet, Chris Benz and Laura Benanti.

FRENCH MEN: Cerruti is putting the focus on men’s wear, with photographer Paolo Roversi doing the honors for the Paris-based house’s fall-winter campaign. A group of French male models pose on the famous Pont des Arts. Roversi helped define the look of the label in the Eighties with Nino Cerruti before his departure in 2001. The men’s ad breaks in this month’s L’Uomo Vogue and will also appear in French media.