The 220-page issue features the designer’s futuristic Quai Voltaire apartment on the cover and photographed by him inside. 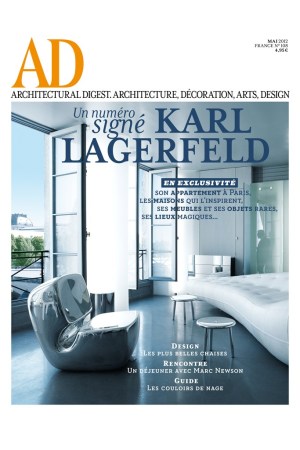 HOMEBODY: Marie Kalt, editor in chief of the French edition of Architectural Digest, learned a great deal about Karl Lagerfeld when she asked him to guest edit the May issue, which hits most newsstands in France on April 13. For starters, she found out that he once wrote about decorating for a few French magazines under pseudonyms, one being Magnus Dancourt. Why did he choose this name? “Magnus, it’s my middle name. And Dancourt because it’s very French,” he told her in his rapid-fire manner.

Kalt also quickly discovered that home aficionados had plenty to learn from Lagerfeld, who displayed an encyclopedic knowledge about the decorative arts. Even the table he laid out for a lunch with Marc Newson, one of his favorite industrial designers, had the AD crowd impressed: rare plates by Art Deco heroes Louis Süe and André Mare, and Lalique glassware impossible to find in any reference book. “He knows better than the experts,” Kalt marveled. “Also, he has an opinion on everything.”

To wit: When they proposed doing an article on pools, Lagerfeld decided in an instant to focus on lap pools. Like the late American decorator Elsie de Wolfe, aka Lady Mendl — who is featured in the issue under the headline “Star de la Deco” — Lagerfeld is of the “no second option” school of design, Kalt noted.

The 220-page issue, with the designer’s futuristic Quai Voltaire apartment featured on the cover and photographed by him inside, includes articles on Martin Szekely, Zaha Hadid and François Morellet — whose work Lagerfeld admires. The designer also edited a selection of high-tech gadgets and picked 20 cool chairs out of 140 proposed to him by AD. He even shares his collection of pins and brooches by Suzanne Belperron.

Kalt said she was struck by the breadth of Lagerfeld’s interests and taste, which spans from the 18th century to five minutes ago. One common denominator, however, is the dearth of color across eras and styles. “It’s a black-and-white issue,” she noted.

In his editor’s letter, Lagerfeld notes that the home plays an ever-larger role in our lives, especially as the digital revolution puts the world at our fingertips. Moreover, the home, like fashion, holds a mirror to our times. “We are at the heart of a Russian doll: first the clothes, then the apartments and houses.…Even the streets and the cities are part of the evolution of our preferences and our taste.”

Given Lagerfeld’s popularity, AD is printing 150,000 copies of the issue. It carries a cover price of 4.95 euros, or about $6.60 at current exchange rates.