Editor in chief Dan Crowe was probably not banking on controversy when he organized a joint cocktail during Paris Men’s Fashion Week. 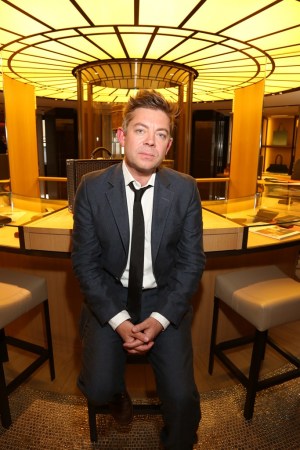 HOT TOPIC: Port editor in chief Dan Crowe was probably not banking on controversy when he organized a joint cocktail with heritage trunk and leather goods firm Moynat during Paris Men’s Fashion Week. The editor said he was surprised by the heated Internet reactions to the magazine’s summer issue, which poked out of a Moynat tote in a display case. With its cover portrait of six editors spearheading a resurgence of print media, the quarterly has drawn fire from U.S. blogs that accuse it of sexism for failing to include any women.

Noting that Anna Wintour had turned down a request to be featured in the issue, Crowe said he simply went with the publications he most enjoys reading.

“I really don’t care who edits those magazines, if they were all black, or all white, or all women, or all men, or rabbits — I just don’t care. I’m aware that — and I was aware — that putting five [sic] white guys on the cover was going to be difficult, but you know, tough s–t. That’s my opinion,” he said.

Crowe said ironically, the issue only goes on sale next week in the U.S., so the people objecting to it have yet to read it. Still, the furor has raised some interesting issues. “I like particularly what happened afterwards, when it went from the anger at Port to a debate about women’s journalism,” he said.

“I think things like women’s magazines not being in the general sector of certain awards is shocking, and on the other hand, women’s magazines consistently ignore general topics. For example, they might do kind of really great long-form pieces, but they’re always about women. You know, why don’t they do pieces about science or new ways of thinking philosophically about the way we live? It’s always kind of counterpointed by being a woman, so the other argument is that women force their magazines to be niche,” Crowe argued.

Moynat designer Ramesh Nair said he discovered Port several seasons ago, and was drawn to its mix of simple design and rich content.

“It’s got intellectual stuff, which is put in such an easy way that people can understand it. It’s like the bags we have here: It’s clean. It doesn’t complicate life for you,” he said. “For me, Port is like Wallpaper or National Geographic. They’re the kind of magazines which you pile up over the years.”