How Are Independent Magazines Navigating COVID-19?

Publishers are postponing release dates, suspending print runs, and focusing on online in order to engage with readers.

The cover of Another Man's spring/summer 2020 issue and the April 2020 issue of Dazed.

LONDON — Independent fashion publications are facing a series of problems amid the coronavirus outbreak: Shoots have been canceled, advertisers are pulling out, production costs are surging and international shipping blockages are forcing publishers around the globe to pivot and act creatively in order to connect with readers.

In the U.K., Dazed Media is offering the April issue of Dazed and the spring/summer issue of Another Man free to download “as a small gift to our readers.” It has also launched a digital campaign #AloneTogether on Dazed that invites homebound audiences worldwide “to take part in an open movement that uses creativity to celebrate community in the face of isolation,” according to Jefferson Hack, chief executive officer and cofounder of Dazed Media.

Another has introduced the #CultureIsNotCancelled campaign, which urges people and organizations alike to practice social distancing, and still keep culture alive.

“We will be supporting the creative industries by showcasing otherwise postponed or canceled projects, from fashion collections to exhibitions, films and much more. Culture must be protected and projected in the bedrooms of every home to give hope and humanity in a time crisis. The importance of digital media in doing this cannot be underestimated,” Hack said.

Dazed will also suspend the print edition of its summer issue and, instead, create a special digital moment with contributions from readers and its creative community around the world.

“We are learning to adapt, connecting with each other via Zoom and our audiences as much as possible to ensure we can act and react in meaningful ways. It is important for Dazed to document this time — not to reflect it, but to help shape positive future narratives around culture and society in light of the crisis,” added Hack.

On Sunday, Hack penned an open letter to members of the British fashion industry, entreating them “to save our creative fashion workforce and save our national identity.” He urged people to support the BFC Foundation Fashion Fund , “which I am hoping our government will prioritize for urgent financing.”

As part of his call to action, Hack cited BFC research showing that 35 percent of young designers in the U.K. “will not make it past the next three months, and over half of the industry could be wiped out by the end of the year, including the livelihoods of many creative freelance individuals – the photographers, stylists, hair stylists, make-up artists, art directors, the tailors and the young creatives who are the very essence of our country’s creative production; its life and soul. alongside the humanitarian crisis, we must also recognize the very real economic crisis that has put our creative industries on a cliff-edge for survival.”

I-D is releasing a similar project to Dazed in the coming week. Its parent company Vice introduced a pay cut last week for many employees for the next 90 days. Executives will see their pay reduced by 25 percent, with ceo Nancy Dubuc taking a 50 percent cut.

As reported, Vice staffers taking home $125,000 will have to endure a 20 percent cut and also work a four-day week while those making between $100,000 and $120,000 face a 10 percent cut The i-D editorial team in London has not yet been impacted by the pay cut, because of the generally lower salaries in the U.K.

Condé Nast’s Love magazine, meanwhile, has seen a 41 percent surge in unique online users and a 94 percent jump in social media engagement over the past week, as it presented its own lockdown initiative #LOVEIN, featuring an exclusive interview with Rita Ora on how she is coping with loneliness during self-isolation. There is also Matty Bovan whipping up the perfect chocolate soufflé at Bistrotheque; New York celebrity personal trainer Korey Rowe’s workout routine, and Mei Kawajiri, Bella Hadid’s favorite nail artist, creating custom nails art daily for the publication.

“Love hopes to offer some respite from the horrendous developments we are all experiencing, actively working remotely to present colorful and upbeat content to enrich their audience,” said a magazine spokesperson. Meanwhile, British and Italian editions of Condé Nast titles are offering free digital access to the May issues.

The biannual magazine A Magazine Curated By, which has collaborated with Pierpaolo Piccioli, Kim Jones and Simone Rocha on recent issues, wrapped the production of its latest issue just days before quarantine measures and forced confinement came into effect across Europe. With the help of screen-sharing applications, it managed to finish graphic design, and layouts, and slowly put the pages together with team members in France, Germany, Italy and Canada all working from home.

Dan Thawley, editor in chief of the magazine, said: “Photography labs started closing down across the globe, and our contributors were racing to retouch images and process films in various cities. One was even the victim of price-gouging at a New York facility, which close to doubled their costs overnight knowing they were the only lab left open.”

The magazine’s printing facility is in northern Italy, and it’s still operating during this quarantine period as it is considered an essential service. “Our print schedule did not change. Many of our museum boutiques will receive the magazine later, but we expect it to still have several good months of shelf life. We are unsure of how [the virus] will affect deliveries to other stores,” Thawley added.

WATCH: How Fashion’s At-Home Workforce Is Helping to Fight Coronavirus

The team is now assessing ways of moving forward in the second half. “We are confident that both our creative and business models are agile enough to weather the economic repercussions of reduced advertising dollars and constrained production budgets. We remain hopeful that the logistics to mail out will remain an essential service. And to ensure that, we are preparing targeted digital partnerships to help support this launch,” said Blake Abbie, editor at large at A Magazine Curated By.

Adriano Batista, editor in chief of the Barcelona-based men’s wear magazine F–king Young! said despite the fact that the title already had most stories produced before lockdown, it will have to hold the release of the new issue a bit longer as its design studio is closed. In the meantime, it has been producing interviews focusing on the recent situation for its web site.

“We also depend on other factors that we can’t control, like distribution. Advertising will also be a big problem, not for this issue but for the next ones, because the brands are not selling like they used to sell before this crisis and we all depend on each other. It’s a full circle,” he said, adding that the magazine will try to focus more on sustainability and responsible consumption in future issues. 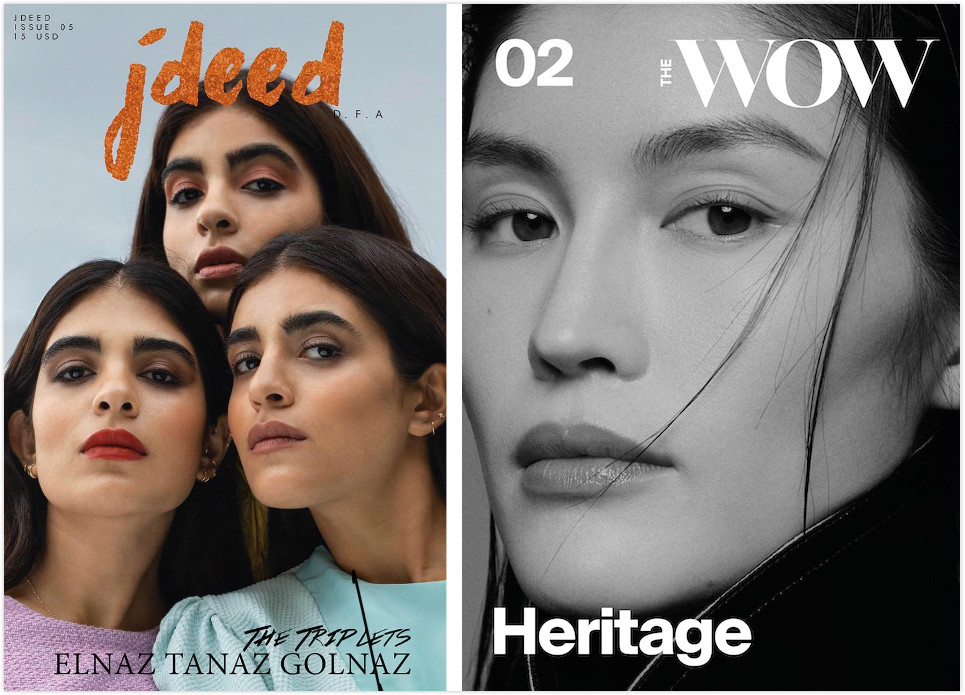 The cover of the latest issue of Jdeed and the second issue of The Wow.  Courtesy Photo

For smaller titles, the lockdown has been particularly brutal. Wei Liu, editor in chief of The Wow, a London-based magazine celebrating Asian women, said he has had to postpone the upcoming issue until everything returns to normal.

“I was informed our shoots, including the cover story, had been temporarily canceled or postponed since February due to the virus situation. And 80 percent of our shoots were initially scheduled in March and early April in New York and London, then the shutdown happened. My distributor also told me most of the shops were closed because the government decided that magazines were not an essential product,” he said.

“As a new, independent magazine without any advertiser, the production budget has always been the biggest issue. Each of the interviews and editorials takes a long time to communicate and confirm, I can’t afford the time and money to get everything done on time. The only thing I can do now is focus on the text content, try to finish the interviews by e-mail and phone, ask the interviewees to provide their self-portraits, and find a way to use it in the magazine,” he added.

Independent magazines in areas with stricter lockdown rules than Europe are facing even more challenges.

Cynthia Jreige, founder and editor in chief of the Beirut and Dubai-based Jdeed magazine, said: “The apparition of the virus in Lebanon has forced all the businesses that aren’t ‘first necessity’ to shut down, the printing house we work with and most of our distribution points included. Fortunately, the printers were able to work in shifts to finish the production which ended up being delayed by about a week.”

Distribution has also been severely disrupted. The magazine could only be delivered to 45 stores in Lebanon, instead of the usual 340, and international shipping has stopped as Beirut International Airport has been closed for almost three weeks.

In response to the restrictions, she has released more content from the latest issue online, and partnered with Toters, the top delivery company in Lebanon, to make sure her readers will be able to receive the magazine on their doorsteps. She is also about to start a series of live interviews on Instagram with designers, photographers, make-up artists and vegan restaurant owners.

Some publications are less impacted, such as the annual, independent fashion magazine 1 Granary, which was founded by Olya Kuryshchuk when she was a fashion student at Central Saint Martins and doesn’t rely too much on advertising. The majority of the revenue of the publication comes from sponsorships, brand and showroom consultancies and event partnerships.

“We released our latest issue mid-November and plan to begin working on the next issue from May,” said Kuryshchuk, who is currently stranded in Mexico due to the lockdown. “This month we will be observing and gathering ideas and information that will feed into our print. We can see the undying demand for online orders, and our distributors are working nonstop. As long as the printing press is able to stay open, we hopefully will manage to go ahead.”

She said the core team is very small. “None of the [British] government support schemes work for any of us. For now, there are no changes and I am determined to support my team through this time. But thanks to the success of our previous issue and the multiple revenue streams of 1 Granary, we should be secure for the next few months,” she added.

Started as a student magazine from Central Saint Martins, 1 Granary is also aiming to help fashion students who, due to the virus, won’t be able to stage graduate shows. The magazine is proposing to showcase and promote their work online and represent them via their graduate showroom.