How People Editor in Chief Produces the U.S.’ Biggest Weekly Magazine From His New York Home

Dan Wakeford’s 200-strong editorial team are learning to adapt to the “new abnormal.”

“Sweatpants on downstairs obvs,” captioned People magazine editor in chief Dan Wakeford on an Instagram story of him appearing to be dressed smartly, at least from the top up, in a crisp blue shirt during a Zoom video call with a member of his team.

He, like tens of millions of people across the U.S., has been forced to work from home due to the coronavirus and after semi-relaxing his usual office attire, Wakeford is having to quickly adapt to producing America’s biggest weekly magazine remotely.

All things considered, the first remote issue in People’s 46-year history, published Friday, went fairly smoothly, according to Wakeford, who has been working from his home in Bellport, Long Island, since March 12. There was a little last-minute drama, though. “If you’re working from home, you’re more reliant on external computer systems and it was a little bit slower than it is usually so it was right up until the last minute to get the pages up.” In the end, the crisis was averted and millions of copies of the Meredith Corp.-owned magazine were printed, ready to be shipped to subscribers and newsstands nationwide.

Trying not to overwhelm the system is just one of a number of working-from-home methods Wakeford and his 200-strong editorial team is having to get used to. “We’re all adapting to the new abnormal,” he continued over FaceTime, dressed in another smart black shirt and with one of his cats, Mikey, perched on his lap. “We’ve managed to do most of the functions. Obviously we’ve been using the same stuff as the rest of the nation. We’re much more proficient on Zoom, WebEx, FaceTime and Slack calls.”

Morning editorial meetings, sometimes attended by 70 staffers at People’s downtown Manhattan office, have now been made much smaller over video chat so not to have everyone talking over each other. Wakeford also feels one-on-one video chats are more personal and therefore good for the mental health of his staff at what is a stressful time.

The process of putting each page of the mock-up magazine on a wall for countless editors to pore over has also had to be transformed into a PDF. Doing this online is particularly tricky for magazine editors, long used to making changes with pen and paper and switching the pages to see how they flow, as well as selecting the right images. 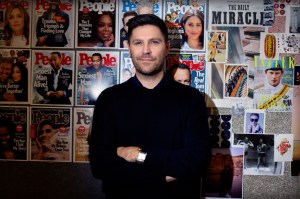 Dan Wakeford pictured in his office in December.  Lexie Moreland/WWD

As for shoots, at press time a few are still planned on location, but a Meredith representative stressed that the company is monitoring “the rapidly moving developments as our continued prioritization is on the safety and well-being of our employees.” For those that have taken place recently, there wasn’t the usual flock of staffers and freelancers fussing over a celebrity. Adhering to government guidelines to have gatherings of no more than 10, shoots were attended by the bare minimum — and it could get even smaller.

“We have talked about doing self-directed shoots from our creative director with the celebrities if they’re not comfortable with doing those shoots,” mooted Wakeford. “At the moment, it’s not a problem. We do have a lot of stuff in the bank. Obviously, we’ve been doing interviews with celebrities over the phone over the last week.”

Rethinking shoots is something all lifestyle magazines are having to do in the current climate. Laura Brown, editor in chief of InStyle, another Meredith publication, told WWD last week that they’re “hustling.” “We’re shooting in different locations, using pickup art, asking for self-portraits. We have to read the situation every day so we’re getting the work done however we can. Apart from the challenges we’re all facing, it’s a time to be inventive.”

Last week’s People cover was also a change from the usual celebrity-shot feature or shocking news of a breakup or the latest in the ongoing British royal family saga. The headline was “Facing Fears & Finding Courage: The Coronavirus Crisis,” set on a black background and surrounded by images of hospitals, Tom Hanks and Rita Wilson (both contracted the virus), school closure signs and people wearing masks. Inside, there was an eight-page COVID-19 story, focusing on a lot of the heroes and helpers.

But that didn’t mean an end to People’s bread-and-butter entertainment stories, with Prince Harry and “The Bachelor’s” Pilot Pete and Madison Prewett also making a small appearance at the top of the cover. “We’re obviously keeping the reader up to date with corona information and making sure we’re getting that right. But it’s also important to help people escape and give them normalcy and keep them entertained and give them a little comfort in these times,” added Wakeford.

There had to be changes to some of its usual content, though. Some edits were made to previously closed pages so not to appear tone deaf, while going forward restaurant recommendations are out for now, recipes are for smaller groups and beauty features will be focused on at-home treatments.

The first remote issue clearly did the trick for Meredith’s top brass. “On Monday night I was very proud of the team. They pulled off a close completely remotely for the first time that I’m aware of anyway,” said Doug Olson, president of Meredith Magazines late last week, adding that the majority of the publisher’s staffers in various offices around the U.S. are now working from home. Those still going into the office include some security guards and a few employees working on photo shoots at its head office in Des Moines, Iowa, and at its Birmingham, Ala., location. Those two offices are still open, although Meredith is recommending that most of its staff in these buildings work from home. Its offices in New York, Los Angeles, Seattle and Chicago are closed.

See Also: Influencer Marketing in the Time of the Coronavirus

If the federal government or states move to introduce strict quarantine rules, which could prevent these photo shoots from taking place altogether, Olson stressed that Meredith publications, including InStyle, have enough material for the next couple of issues. At the time of writing, California Gov. Gavin Newsom had just ordered all 40 million Californians to stay at home. Newspapers, radio and magazines were among the services considered essential, but most media organizations are thought to be encouraging staffers to work from home where possible. At the same time, New York Gov. Andrew Cuomo planned to sign an executive order mandating all nonessential workers remain home.

“We’re fortunate that many of the brands working issues are two months ahead on their content and so at this point we’re in very good shape, but if we can’t go into the office in any shape or form in any of our locations, then we would start to rethink some of the themes of our issues in the future,” Olson said.

“We have a lot of relevant networks where we can pull stories and photography from people who are sources for us all the time and as long as it’s on brand it’s something we would consider. In addition, if this thing goes on a long time we clearly have a lot of unused content in our organization that we could rethink and be able to put out our issues.”

But while editorial content is one part of the magazine puzzle, production, advertising and sales are the other vital components. For Meredith, the COVID-19 crisis is yet to hit the production side of its publishing empire.

“You’ve got to keep in mind a lot of these facilities that do printing are in more rural areas where the impact has not been quite as severe as bigger cities. Clearly we’ve seen from all the maps it can be anywhere and community spread, but so far we have full capacity on the print team,” explained Olson. “As a contingency, we went through and said if we have to pull back from a capacity standpoint what would we continue to print or how would we prioritize those things so we’ve got all those plans in place. Obviously, People would sit at the top of the list because it’s a weekly. So we would continue to focus on it and then it really depends on where we are at the close of these different issues what would be next.”

Another important factor for publishers at this time is whether the stores that sell these magazines will be open. In the case of Meredith, only around 4 percent of its entire rate base is newsstands, while the rest is subscription. For People, one of Meredith’s prized possessions, it’s a little higher at around 10 percent.

“We have 36 million subscribers so we’re not as dependent on newsstands as others are,” said Olson. “But that being said, the places where we sell the most product are Walmarts, the Targets, the big grocery chains, which are still open.” An uptick in sales there has helped to offset a slide in places like airport terminals.

When asked if there is a concern that deliveries will stop, he said: “We understand the severity of this pandemic and hope that doesn’t happen.”

Then there’s advertising, which the media world has already seen plunge in the past few years. Olson reported that it’s held up “pretty well” so far amid the coronavirus, although there has perhaps unsurprisingly been a slide in international and domestic travel. Some advertisers have also been shifting spend from the upcoming issue to the second or third in line.

Research firm eMarketer recently warned that as of now, global ad spend is expected to increase this year to $691.7 billion, down from an earlier estimate of $712 billion due to the impact of COVID-19, adding that this could change for the worse.

Only time will tell how that fares.