The brand presented key insights and forecasting for the 2016 music festival season in London.

By Julia Neel and Lorelei Marfil on March 23, 2016
View Slideshow 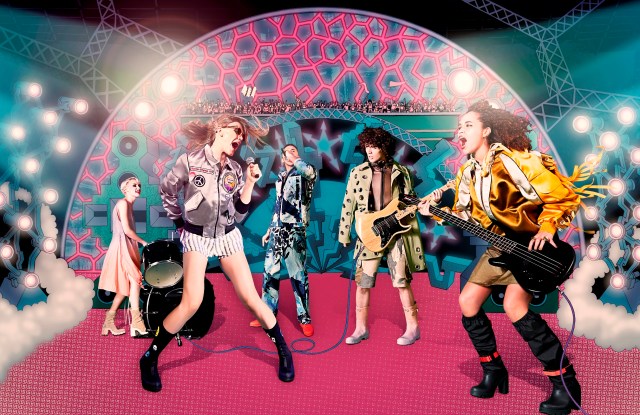 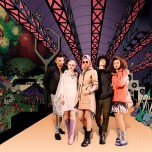 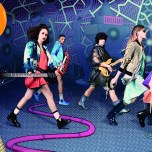 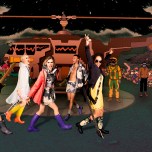 The photographer and filmmaker Elaine Constantine filmed models posed as an on-stage band. The shoot took place in a studio, and the images were layered over bold, colorful animations by the illustrator Will Sweeney.

The images show a helipad drop-off, a walk to the stage, a headline performance and a walk-off. The “band” wears outerwear, accessories and footwear from the spring collection.

The campaign will launch across the brand’s social media channels next week.

On Tuesday morning in London’s Soho, the label also hosted its inaugural Festival Summit at the storied Ronnie Scott’s jazz bar and did what many brands might be disinclined to do: share its key learnings and those of industry experts with other brands and retailers.

Counterintuitive? Not according to creative director Alasdhair Willis, who wasn’t afraid to share how Hunter’s recent search insights would be informing the brand’s 2016 communication strategy, based around festivals.

“The more investment, the more innovation, the more technology, the more people who invest in the festival space, that can only draw attention and make it a bigger business opportunity for us,” said Willis following the event. “It’s all about sharing information. There’s no key competitor in this room, to me, it’s not like there’s another waterproofing or outdoor brand here, but I truly believe in sharing information; if it benefits you and it supports you, it’ll ultimately have a positive effect on me. That’s the way the new landscape of commerciality in business is moving and I want Hunter to be seen as a brand that is at the forefront of that conversation.

After learning that searches pertaining to Hunter festival products were consistently driving traffic to its site from April to September, with a peak in August, while sales for the brand peaked just before Glastonbury — which starts this year on June 22 — Willis’ plan is to remain relevant in a consumer’s experience of the site by launching a dedicated online festival hub next week. “Surprisingly, in August, the interest around our brand reaches a peak, and we always thought that as a wet-weather brand we’d have very little relevance in August but actually there’s more people searching ‘Hunter wellies’ in August, festival-related, than in any other time of the year.”

The hub will be populated by content designed to engage with an audience that is hungry for festival-related content. “We’ll do our own playlists; there’ll obviously be styling advice about what you should be wearing to each individual festival; there’s going to information on the acts at the festivals; there’ll be short- and long-range weather information for global festivals; it’s the start of what is and what should be seen as a very concerted strategy to engage with and work around festival season, which is no longer just a few festivals each year,” he explained.

The Hunter festival campaign was shot by Elaine Constantine, and a film will also launch in early April to amplify the conversation with its festival consumer. During the festival season, the brand will open traveling festival pop-ups and run guerrilla activity on the grounds at some of the world’s biggest festivals.

The summit, which will become an annual event, was opened by Willis, who spoke about how valuable it is for brands to be associated with festival-goers’ emotional connection to the experience.

“Festivals are more than just a destination for live music,” he said. “The reach and commercial opportunity of festivals makes them a very serious business. The non-disposable moments at festivals carry so much weight — they are unforgettable, water-tight, locked-down emotional memories that as a brand, you want to access and be associated with.”

Lucie Greene, worldwide director at JWT Intelligence, agreed that experience is key for festival consumers, particularly Millennial consumers, 79 percent of whom said that sharing an image of themselves having a special experience says something about them to other people. She also noted that the move from spending on “stuff” to experiences is a cross-generational trend.

But she warned that brands hoping to engage with festival consumers need to do more than just set up a pop-up shop. “They need to do something ‘stake-in-the-ground,’ something different,” she told WWD. “The expectation of branded experiences have become way more sophisticated; people are at ease with synesthesia and virtual reality and have a real appetite for that.” She mentioned Kodak’s recent activation at SxSW, The Memory Observatory, where people were recorded talking about a special memory which was then set to music, and played back with a light show for participants, often with emotional results.

Echoing Greene, Clare Lusher, marketing director at MAMA Festivals, said it was important for brands to really understand what they want to achieve at a festival. “So many brands just want to be attached to festivals but they don’t really know why,” she said. “They just think they need to be there. They are told by creative agencies that they need to be there so they go a bit wild. So if you have a brand that knows its objective and the trust that you can deliver as a festival on that brief, you have a starting point because at that point you can create something amazing. As a business, we can create something out of nothing, we just need to be given the information and the budget.”

Spencer McHugh, brand and marketing director at EE, which sets up the world’s largest temporary high-speed 4G network as part of its sponsorship of Glastonbury, spoke about how technology had changed the festival experience, and how data use has increased by 930 percent at Glastonbury in the last two years, and projected that amount would increase by 500 percent in the next five years.

Pia Stanchina, industry manager at Google, shared some results from a recent qualitative survey in which the majority of respondents said they were excited about festivals but, conversely, the majority didn’t actually attend festivals. But that doesn’t mean they weren’t searching for festival-related content before, during and after festivals. Accordingly, she said it’s vital to ensure a clarity of information to those consumers.