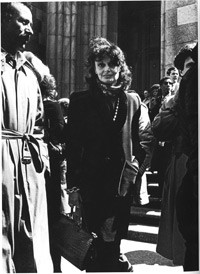 A stream of artists, designers, celebrities and socialites made their way up the steps of St. Patrick’s Cathedral for Andy Warhol’s 1977 memorial service, and photographer Christophe von Hohenberg captured many of them.

On assignment for Vanity Fair, the lensman’s original plan was to shoot women wearing miniskirts. When that didn’t pan out, he instinctively started firing away at the many notable guests. On Oct. 13, nearly 20 years after the artist’s death, Empire Editions will publish those images in a black leather-bound book, titled “Andy Warhol: The Day the Factory Died.” As Charlie Scheips, in the introductory essay “Time Capsule,” writes, “To a larger degree, however, it is an elegy. An elegy to a era — though only 20 years ago, which is now long gone.”

As The New York Times reported, the “world’s most droppable names attended.” The book has images of Diane von Furstenberg atop the cathedral’s steps, a cigarette-smoking Stephen Sprouse with Debbie Harry, Calvin Klein in a double-breasted pinstripe suit and arm-in-arm with a young Kelly Rector, Halston escorting Liza Minnelli, Paloma Picasso standing proud in sunglasses and Michael Musto in a jacket and pants printed with images of Ronald McDonald, the Hamburglar and Tony the Tiger. Artists turned out in force, including Robert Mapplethorpe, David Hockney, Roy Lichtenstein, Francesco Clemente, Jamie Wyeth, Keith Haring and Peter Max.

Along with the black-and-white images are an assortment of letters that pay tribute to the artist. Betsey Johnson mentioned that Edie Sedgwick was her first fitting model and John Cale of the Velvet Underground was her first husband. Martin Price recalled how Giorgio di Sant’Angelo once told him of the time he, Calvin Klein and Warhol went for a walk down Park Avenue to the Mercedes Benz showroom in 1970 and each bought cars in cash. Leo Castelli remembered visiting Warhol’s studio — “if you could call it that” — in the early Sixties, considering it was then in the cluttered Lexington Avenue apartment the artist shared with his mother, where a rocking horse appeared to be another main tenant.

Joey Arias wrote of how Warhol would make daily stops at Fiorucci, where he worked, for an espresso and some gossip. During those visits, Warhol would have Arias introduce him to “real cute guys,” and Arias “of course, would egg them on and ask them to drop their pants because Andy was looking for a model to work with.”

Lynn Wyatt described how Warhol bashfully asked Vivian Vance of “I Love Lucy” fame if he could take a Polaroid of her, after spotting her at Pearl’s. Fernando Sanchez wrote of the ubiquitous tape recorder plunked down before any conversation. There’s even a 1964 letter from a Campbell Soup product marketing manager who mentioned his squashed plans to buy a painting. “I’m afraid you’ve gotten too expensive for me,” but Campbell took the liberty of sending a couple of cases of tomato soup to the artist.