“The World According to Karl” edition, which comes out today, includes interviews with several of the bold-faced names that orbit his universe. 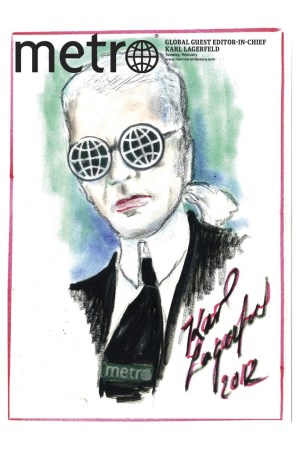 IN CONTROL: Karl Lagerfeld sketched himself wearing globe-shaped glasses for the cover of Metro International’s edition today, which he guest edited. He also depicts himself handing out copies of the free daily, dressed, as is his present custom, in a tailcoat. (And he actually did hand out copies this morning on the streets of Paris.) “The World According to Karl” edition includes interviews with several of the bold-faced names that orbit his universe: designers Haider Ackermann and Silvia Venturini Fendi; the singers Florence Welch and Azealia Banks, and fashion editor Carine Roitfeld. Lagerfeld also fields questions about his sex drive — “No, I’m not very much interested in that. But it’s not a question of time, people can make quickies you know” — and fires back at those who suggest he does too many collaborations: “I couldn’t care less. It depends if I know the people. If unknown people say this, they should send me a note and explain why. The limit is up to me to decide.”

Readers of Metro — which is distributed in 100 cities in 22 countries — can also find out how Lagerfeld takes care of his ponytail, what he orders at Café de Flore, and what furniture he chose for his new Left Bank offices. He also offers his best advice for staying slim: “I found out that clothes are much better than scales and things like this. Clothes don’t lie,” he tells the newspaper, which boasts a daily readership of 17.1 million. “If you have only clothes in one size and nothing one millimeter bigger, the minute something hurts somewhere, you know it’s time. And always keep a pair of tight jeans, something tight for control.”

The Karl paper is also available in an app version from iTunes and at Metro’s new style Web site, ModMods.com, which goes live today.