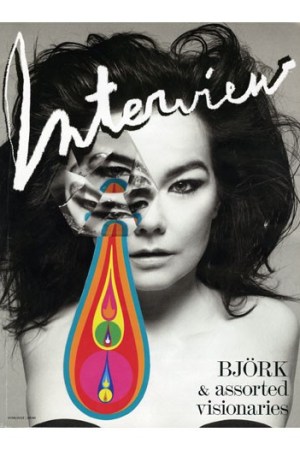 In September, Interview threw a splashy party for its relaunch at the Standard Hotel in New York’s Meatpacking District. At the time, the hotel was still under construction. Models, editors and other downtowners had to tiptoe on planks to avoid snakes of electrical cords around the unfinished penthouse, where the magazine’s owner, Peter Brant, and his wife, Stephanie Seymour Brant, held court at one end and co-editorial directors Glenn O’Brien and Fabien Baron at the other. Nine months from completion, the Standard was a shell of the chic hotel it was to become. But at least the foundation was there.

The reverse appears to be true of Interview. The title is now a shell of its former self, hardly the provocative glossy it was even 18 months ago under then-editors Ingrid Sischy and Sandra Brant, Peter Brant’s first wife. When in February 2008 Brant bought his ex-wife’s stake in the company to gain full control, he plotted to bring a mix of intelligence and downtown glam to a publication launched by Andy Warhol in 1969. Instead, Brant has withdrawn from the day-to-day operations of Brant Publications Inc. as he focuses on his contentious divorce battle with Seymour Brant.

This story first appeared in the June 26, 2009 issue of WWD. Subscribe Today.

Ryan Brant, Peter and Sandy’s son, has now taken over at the publishing company as acting president, and O’Brien was forced out early this month to be replaced by Baron, who himself was fired last fall but has returned as sole editorial director of Interview.

Given all the turmoil and a recession that has seen advertising at even behemoths like Vogue, Harper’s Bazaar and Vanity Fair tumble by more than 20 percent, many wonder if Interview will be able to weather its storms.

After more than a decade of profitability, Interview, as Ryan Brant has recently described, has dipped “significantly” back into the red — although a company spokesman claimed it is “more profitable now” than in 2008. The firm’s smaller titles, Art in America and The Magazine Antiques, are, according to sources inside Brant, profitable, with significantly less overhead than Interview. But they also bring in much less ad revenue. Brant Publications, meanwhile, plans to launch a quarterly design magazine, Modern.

Clearly, ongoing financial support from Peter Brant will determine Interview’s future. But with its financial position, and a mind-numbing divorce to battle through, time will tell how much patience — and money — he will have to spend.

The magazine’s travails stem from a clash of business cultures and of egos among the top brass, as well as poor timing. Sischy and Sandra Brant had produced Interview since 1989, when the Brants bought the magazine from the Warhol estate for an undisclosed sum. Sischy’s Rolodex provided content for the magazine — friends like Elton John would interview their peers and other friends like Bruce Weber would photograph them. Sandy oversaw ad sales, and with her then-husband’s art world heft and her and Sischy’s contacts in the fashion world, brought in a steady stream of ad pages. The duo ran a tight ship — they didn’t pay their contributors much money, but they didn’t have to. Talent flocked to Interview because, for photographers and stylists, it was a creative outlet with few boundaries, unlike typically more structured — and higher-paying — commercial assignments. That formula drove Interview into profit from 1994 on — the title made $2 million at its peak — and to a rate base of 200,000.

But when Peter Brant took full control of the business, out went Ingrid’s and Sandy’s contacts and a new network had to be built. Among them, Christopher Bollen from V magazine became editor of Interview, and Karl Templer joined as creative director. Alan Katz, who had been publisher at Cargo and Vanity Fair, was named group publisher. Stephanie Seymour Brant was given a token title on the masthead: contributing fashion editor. O’Brien and Baron joined Brant Publications as co-editorial directors overseeing Interview, Art in America and The Magazine Antiques, and also reportedly received a small stake in the company.

The model seemed perfect: O’Brien brought connections in the art world and his editorial expertise to the table — he was an editor at Interview in the Seventies, and later wrote for Rolling Stone and GQ. Baron — a well-respected creative director, most recently at French Vogue, and founder of his own ad agency, Baron & Baron — brought deep connections to photographers, stylists, designers and luxury brands that would help boost Interview’s image among advertisers. “A photographer wants a good relationship with Fabien because he does all the ad campaigns,” said one creative director at a fashion title. “You want to work with him because maybe, perhaps you’ll work on the Calvin Klein campaign.”

Nonetheless, despite the buzz around the new team, observers took Sischy’s and Sandy Brant’s departure as a blow to Interview. “Losing Ingrid was akin to losing Jane Pratt at Jane,” said George Janson, managing partner-director of print at Mediaedge:cia, who handles media planning for Chanel, VF Corp., Gallo and Macy’s Inc., among others. “Although she wasn’t the namesake, she was so akin to that magazine.”

But the expensive relaunch came just as the economy tanked. As the Dow shrank from 12,000 in February 2008 to 8,500 by December, advertisers cut back on spending across print, and trimmed nonessential media properties from its media plans. Interview, a small niche title, often fell into that “add-on” category of magazines for fashion brands. Through 2008, the title’s ad pages — despite the September issue — fell 27 percent, to 656 pages.

Meanwhile, the partnership between Baron and O’Brien soured. “We were supposed to be equal partners and that only works if you get along and see eye to eye, and we didn’t,” said O’Brien. According to several insiders, O’Brien wanted to create an art magazine spotlighting a combination of his friends or small indie artists. Baron wanted a high-gloss fashion magazine with sexy photo spreads and well-known celebrities. They differed over “how many pages to devote to what, who’s going to be on the cover, all kinds of stuff,” according to O’Brien. The differences can be seen in the covers — the issues Baron helped oversee featured cover subjects such as Marc Jacobs, Kate Moss and Eva Mendes, while O’Brien’s had covers featuring the likes of Zac Efron and Björk.

Additionally, O’Brien’s camp complained Baron’s shoots were too expensive. Baron, a former creative director at Harper’s Bazaar and French Vogue, comes from a world where photo shoots aren’t done on the cheap. “Baron would fly hairdressers to Paris first class, when there are perfectly good hairdressers in Paris,” said one member of O’Brien’s camp (that said, one creative director in the business commented that “top stylists and hairdressers are all flying first class, no matter who they work for”). Sources claimed the issues Baron helped oversee ran anywhere from $100,000 to $300,000 over budget. Baron declined to comment for this story, but a spokesman admitted to the cost overruns while stressing the budget was controlled by the chief executive officer, who was O’Brien, and not by Baron.

Not that O’Brien was that fiscally austere himself. “He installed a lot of people that were expensive,” said one Interview staffer. He recruited, for example, photographers who charged $5,000 to shoot an item for the Web site, the kind of job an average photographer would charge a few hundred dollars for. “Ingrid was smart about getting people to work for free,” said one insider. “Glenn would say, ‘OK, I have this friend; talk to this person about coverage,’ but then wouldn’t discuss rates. We were in the position of always defending our rates to his friends.”

O’Brien also alleges that Baron intended to seek new clients for his ad agency, driving a wedge between the two editors. “We went on many sales call that turned into a Baron & Baron pitch. He would go so far as to criticize the advertisers. If you’re going to engage in both fields there has to be a fire wall, a line you don’t cross,” O’Brien said. Peter Brant’s increasing withdrawal from the company as his battle with Seymour Brant escalated in part contributed to Interview’s woes. By January, Ryan became involved in the family business (sister Kelly runs the online operations), first working with Art in America and The Magazine Antiques. Ryan, however, came with his own baggage: He founded Take Two Interactive, a gaming company that developed the “Grand Theft Auto” franchise, but was later investigated by the Securities and Exchange Commission over backdating stock options and falsifying business records. He eventually paid $10 million in fines.

Interview’s bottom line continued to struggle after Baron’s departure. This year’s first six issues carried 205 ad pages, 38 percent fewer than in 2008. “To be an independent magazine in America is a hard place to be when ad budgets shrink,” said David Lipman, ceo of his own ad agency, arguing that larger, stable titles do better in tough times. “When budgets shrink, [advertisers] go to what’s true and what you know. When you have a magazine that lacks confidence, as Interview has shown by the changes in the last few months, [an advertiser’s] confidence is shaken.”

By spring, the decline in revenue and increasing expenses caught up with Interview. Freelance photographers, stylists and others claimed Brant Publications had not fulfilled payment for their services. M/M Paris and Templer were among those complaining of slow payment, and one source claimed Templer even considered legal recourse (the spokesman said Templer was paid). Sources said one printer withheld issues of the June-July edition from newsstands until Interview paid up; subscribers claimed they never received their copies (printer Brown Printing confirmed Interview was a client, but did not comment on specifics of Interview’s account).

Indeed, even Ryan Brant recently acknowledged, “There were a couple of months where we weren’t as good as we could have been, but we’re looking to get it resolved.”

As Baron returns, changes continue at the title. Bollen, Interview’s editor in chief is being pushed aside in favor of executive editor Stephen Mooallem, who has been there since 2003. A new president of the magazine is being sought, a search led by Ryan Brant, to whom the person will report. The incoming executive would have complete financial control over Interview. Templer is returning in a package deal with Baron. Ryan is expected to stay on at the company, but the company intends to search for an outside group president to oversee sales for all four titles once the financials turn around. Meanwhile, Brant Publications has filed a lawsuit against O’Brien in the State Supreme Court of New York for allegedly breaching his contract. The company claims O’Brien’s on-the-record interviews with several media outlets following his firing broke a confidentiality agreement he had signed. But O’Brien said he never signed such an agreement.

Baron’s return was warmly received by fans of the magazine. “Ultimately, what he does will turn into ad revenue for Interview,” said Bill Fine, president of online art e-commerce site Artnet Worldwide, who served as vice president of Brant Publications in the Nineties. “But they have to give him a free hand.”

Fashion advertisers believe his return gives Interview more credibility, but it won’t guarantee a flurry of advertising back to the magazine, especially in the current economy. As the magazine’s editorial changes continue, as one media planner who works with fashion clients expressed, “the last thing a media buyer wants to do is put pages into a book they think might close. That’s like running an ad in the last issue of Domino.”