The weekly magazine's upcoming issue is dedicated to the "freedom of expression" with contributions from Whoopi Goldberg, Kristen Noel Crawley and Mahmood.

The cover of the upcoming issue of Grazia Italia.

MILAN — Instagram’s director of fashion partnerships Eva Chen, tapped as guest editor for the next issue of the Italian edition of Grazia magazine, due out Sept. 3, clearly knows a great deal about the power of social media in fostering a more inclusive social and fashion landscape.

Editor in chief Silvia Grilli invited Chen to join her in the development of the upcoming issue of the weekly magazine to underscore how traditional media and digital platforms can support each other in taking a stance for the freedom of expression.

“I want to dedicate this Grazia issue to everyone on Instagram who thanks to their courage and strength are fighting for change,” said Chen. “This issue does not celebrate perfection, but rather authenticity. It’s an ode to uniqueness rather than minorities, to the sense of community and kindness,” she said.

In an interview with WWD, Grilli explained how the “idea to partner with Instagram came about during lockdown, as we realized that during confinement both the social media platform and the magazine were continuing to serve their audiences.” The partnership marks the first time an Italian glossy title is linking with Instagram in such a way.

Following the killing of George Floyd in May at the hands of police and the expanding Black Lives Matter movement, the project took on a different meaning, Grilli offered.

“We couldn’t help but take into account the cultural movement stemming from this tragic event [Floyd’s killing]…and we decided to link this issue to the freedom of expression in all its forms. People were taking to the streets to protest against police brutality and talking about integration and inclusivity.”

Addressing the topic from different perspectives, the issue includes several interviews with and contributions from leaders of change. Among them, actress Whoopi Goldberg calls on people of color to vote during the upcoming presidential election so that their voice is “the loudest ever.”

Ballet dancer Harper Watters, a soloist for the Houston Ballet, gives a glimpse into his professional and personal life dedicated to upturning stereotypes and empowering those in his communities to live in their authentic expression. With around 217,000 followers on Instagram, Watters’ viral videos of him dancing in towering pink heels, and his YouTube channel “The Pre-Show,” have cemented his reputation as a role model.

KNC Beauty founder Kristen Noel Crawley and Netflix star Coco Rebecca Edogamhe talk about unconventional beauty and role models, while singer Mahmood — born in Milan to an Italian mother and an Egyptian father — highlights how the youngest generations are perceiving Italy as a multicultural country. 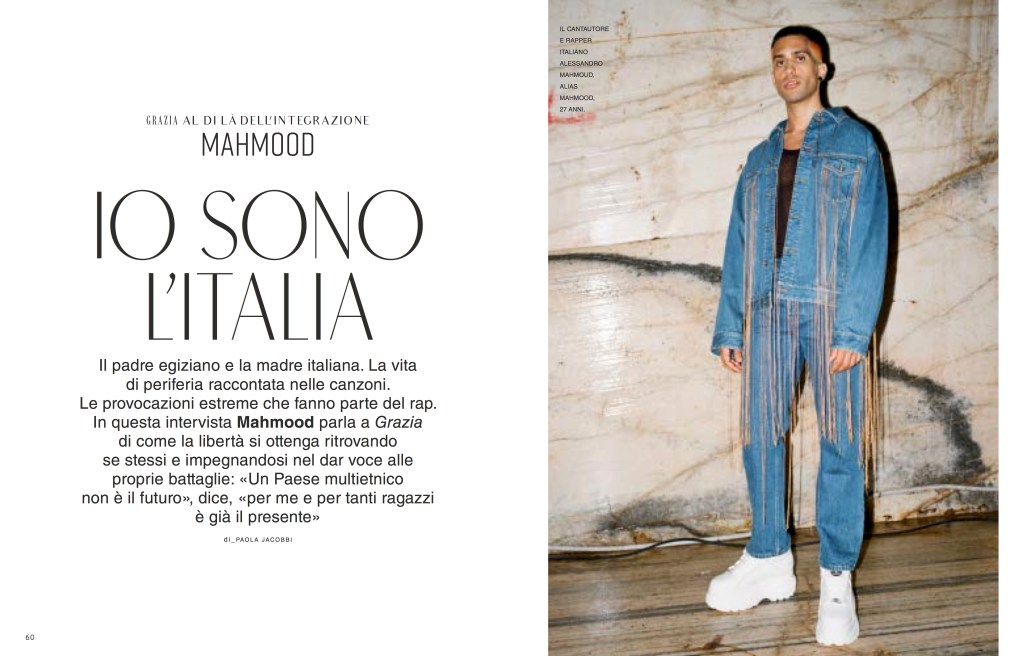 An inside look at the upcoming Grazia Italia issue dedicated to “freedom of expression.”  Courtesy of Grazia Italia.

“The whole issue is a journey through freedom in which the printed and digital platforms dialogue,” noted Grilli.

To this end, the magazine has worked with augmented reality techniques implementing a filter called “libera la tua voce [free your voice]” and available on Grazia’s Instagram profile, which can be used to animate and bring the cover to life. The latter has been developed by visual artist Marino Capitanio, who worked with images of colorful mouths shouting in a nod to the issue’s freedom of expression theme. Readers will be invited for the entire week to use the filter and express their take on freedom on social media.

In addition, the glossy title curated a collection of Instagram filters developed by content creators active on the social network which were used to post-produce some of the fashion editorials in the magazine.

Italy’s Grazia has long believed in the potential of the cross-pollination between traditional and new media. A pioneer in bringing influencers on board when in 2012 the magazine had its own digital “It” girls who collaborated on the title’s projects, the magazine revised the format in 2017, unveiling the Grazia Factory division to focus on niche influencing, while last year it tapped digital entrepreneur Chiara Ferragni to guest edit one of the title’s issues.

Grilli observed how the interaction between digital and printed is pivotal in engaging a younger audience. “One of the key pillars of my tenure at Grazia has been to promote the idea that printed media can still represent a dream,” Grilli said.