Controversy over the common — and questionable — Instagram practice is dividing the influencer community.

Instagram follower loops are a common — and questionable — practice dividing the influencer community.

Instagram follower loops have become a common practice in the influencer community — but that doesn’t mean they’re not frowned upon.

On Oct. 7, Kris Jenner posted a photo in which she sits on a staircase covered in Louis Vuitton bags. “Win 10k USD Cash + all the purses pictured here with me,” read the post, which tagged a company called Curated Businesses. “Yes it’s for real #ad.”

A list of instructions, which directed Jenner’s followers to follow the accounts that @curatedbusinesses was following, for how to win the designer handbags and cash prize ensued. At the end of the post was a disclaimer that read, in part, “This sweepstakes is in no way sponsored, administered or associated with Instagram, or the brands/company in this picture.”

On Oct. 9, when the competition closed and the winner was revealed, the post was removed from Jenner’s feed, as the disclaimer said it would be.

The post isn’t the first of its kind from Jenner or her family — Kim, Kourtney and Khloé Kardashian, Kylie Jenner and Scott Disick have all shared similar posts before — though it is a conspicuous piece of sponsored content in a feed that Jenner almost exclusively uses to express pride for her children’s various businesses.

Representatives for both Kris Jenner and Louis Vuitton declined comment. 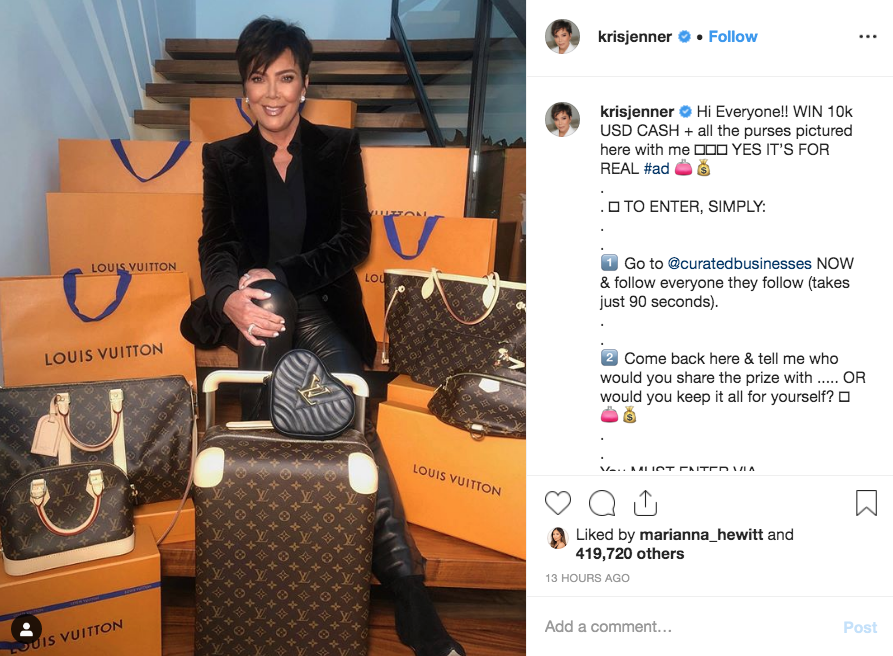 In the last year, 201,000 posts and 21,000 influencers have mentioned giveaways on Instagram, according to data from influencer marketing platform Fohr, which gathers from its influencer pool of 90,000. Giveaways typically work like this: an influencer shares a post with a caption that names a prize — a pair of designer shoes, a vacation, a ticket to a sporting event — and instructions for how to win. These instructions usually include asking a person to follow one or many accounts and engage with those accounts — following, liking, commenting — in some form.

It seems straightforward for followers, but on the influencer side, these giveaways are looked down upon by influencers and agencies as they sometimes emerge from a bizarre, murky process that has been called a follower loop.

A follower loop occurs when one party hosts a group of influencers and/or brands interested in gaining more followers. The interested parties pay a fee to the group leader. The group leader then shares a giveaway post, instructing his or her followers to follow the accounts of the participating parties. The group leader often temporarily unfollows the accounts he or she usually follows and, for the duration of the loop, follows only those participating so as to better direct people to those accounts. The loops are often organized through applications such as WhatsApp and Telegram.

Influencer Grace Atwood detailed how follower loops work on her Instagram Stories, which can be viewed here. 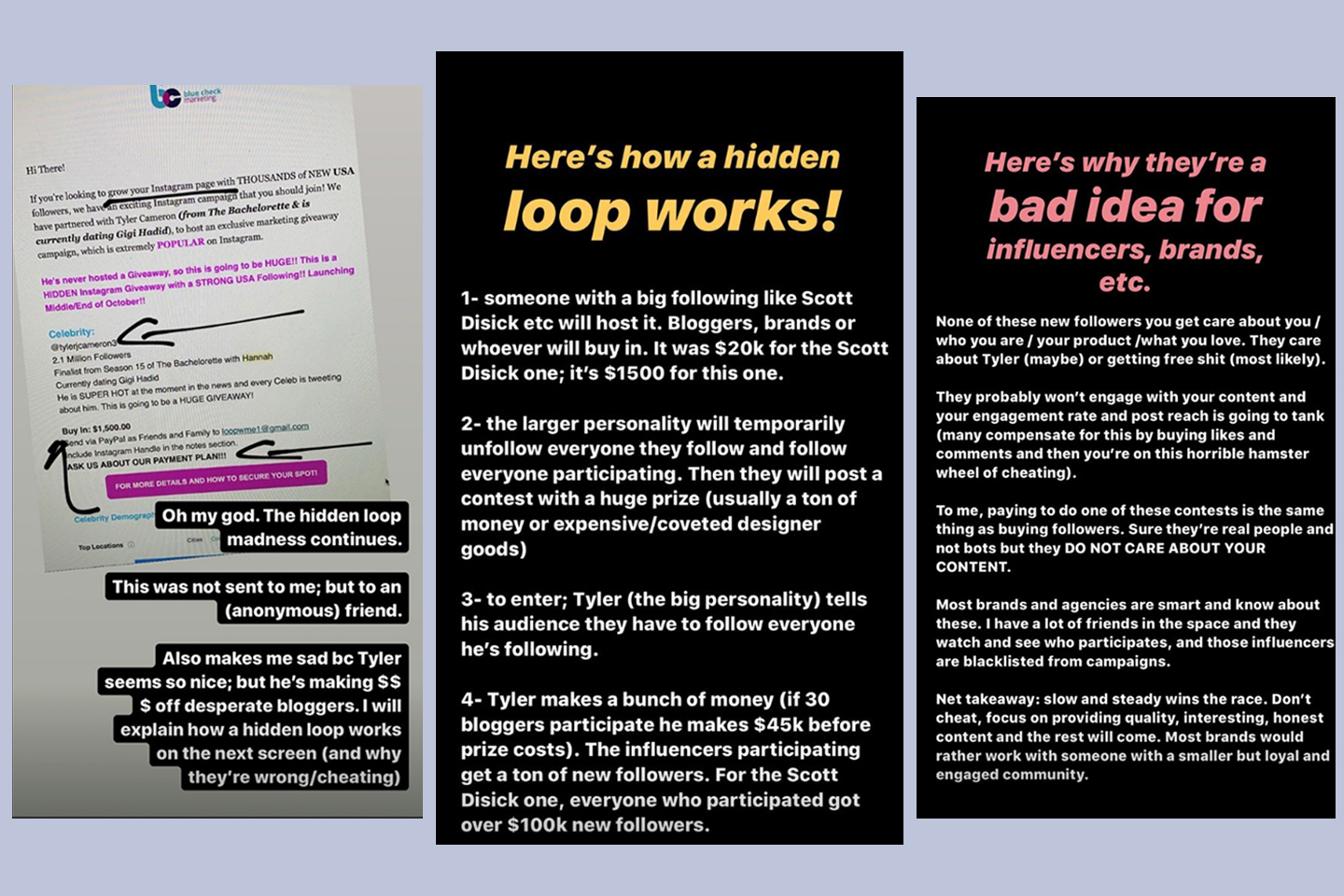 “As an influencer, it’s incredibly frustrating [that] you’re measured against people who are doing this,” Atwood told WWD. “It’s something everyone talks about and most brands and agencies are aware of it. It’s pretty prevalent.”

How much does it cost to participate?

The participation price for a follower loop can vary from $150 on the low end to $20,000 on the high end. The follower payoff corresponds with the price.

Influencer Claire Fogel, aka @clairebearlondon, told WWD that she paid $150 to participate in a loop last year and gained about 5,500 followers over the course of a few days. A source who wished to remain anonymous said influencers and brands can pay anywhere from $10,000 to $20,000 to participate, growing their followings by as much as 200,000 overnight.

What is Curated Businesses?

When reached for comment, Curated Businesses’ founder, whose first name is Schye, wrote via e-mail, “Our campaigns aren’t loops. Our campaigns are legal [and] İnstagram-compliant marketing campaigns using global influencers (not just Kardashians) giving our participating businesses access to audiences they might never have the opportunity to access.

“We are the only verified company (from Australia that has grown rapidly over the last two years) of its kind [and] are known for running legal [and] compliant marketing campaigns that are effective,” Schye continued. “Our company uses government-approved permits [and] all winners are drawn by a government-approved agency overseen by independent, certified scrutineers. We publish [and] keep all our winners and campaigns on our site so everything is completely transparent [and] above board.”

What impact does participating in a loop have on your following?

Though a loop can be a quick way to gain followers — and thus get more and better brand deals — it’s not guaranteed that those followers will continue to follow a brand after the loop ends. This gain of inorganic followers could potentially be damaging to one’s demographic and lead to engagement issues.

“The people that end up following you from a giveaway, they’re not going to be engaging in your content,” said James Nord, founder and chief executive officer of Fohr. “Eventually what will happen is those influencers will have really bad reach, so we wouldn’t work with them anyway. Anyone that really knows what they’re doing would be able to look at those accounts and say, this is not a very healthy following. And engagement gets all out of whack because again, you’re just not getting the engagement that you should be for that following level.”

Fogel said that when she participated in the follower loop, the followers she gained were not her demographic.

“I noticed all the accounts were from Brazil, Mexico,” said Fogel, who is based in London. “I was working with brands thinking, this is going to mess up my demographics completely. One of the people who was running [the loop], even though she was English, most of her followers are from South America.”

How is this different from buying followers?

It is different from buying followers, which are often robots, but it’s also not that different.

“It’s not like cheating as much as buying followers, who that person can never convert into a real engaged follower,” Nord said. “But it’s certainly not in any way the way to build a valuable following. For us, it’s totally useless. We try and steer clear of people that do too much of it. It can make sense if you have two influencers that were really like-minded in the kinds of content they did and those two people wanted to try and get some of their followers to jump over to the other influencer and vice versa. But to do it on a mass scale like it’s happening now feels a lot more like buying followers than it used to.”

It depends on the giveaway. Michael Isselin, an entertainment and media attorney at Reed Smith LLP in New York who focuses on talent and influencer advertising matters, said the giveaways may pose legal issues if they aren’t done lawfully.

“Any time one of my clients wants to run a global sweepstakes, there’s a lot of heavy lifting involved,” Isselin said. “There’s a web of anti-illegal lottery laws that countries have in place that you have to navigate through when you’re doing something like this. Especially as the influencer or the brands that might be participating in it, you really want to take a step back and think about whether or not the parties that are involved in running this are aware of what’s going on, aware of the different laws, the registration, the bonding, the permit requirements, and are they in fact complying with them.”

What is Instagram’s take?

When reached for comment, a Facebook spokesperson said, “This behavior doesn’t violate our policies. Our policies are always under review to ensure we are in the right place.”