The double-page ads juxtapose graphic black-and-white images of women and men with watches whose hands are positioned to mirror their poses. 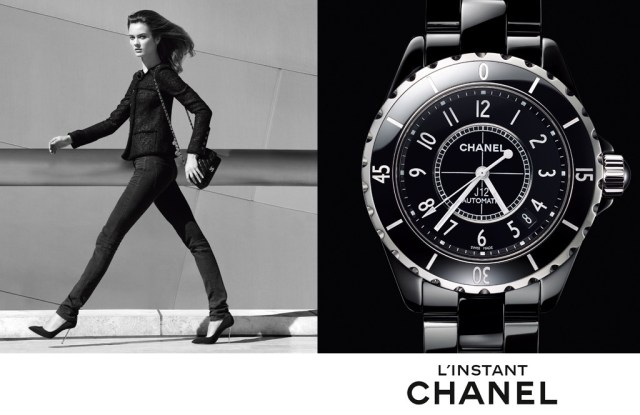 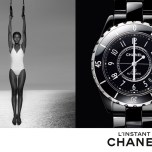 INSTANT PHOTOGRAPHY: Chanel is launching its first new institutional watch campaign in more than a decade with 15 double-page ads juxtaposing graphic black-and-white images of women and men with watches whose hands are positioned to mirror their poses. The campaign, with the tag line “L’Instant Chanel,” was shot by Patrick Demarchelier and unveiled at the Baselworld watch and jewelry fair in Basel, Switzerland, which ends today. The images were styled by Carlyne Cerf de Dudzeele.

The visuals showcase watches from the Première, J12 and Mademoiselle Privé collections, marking the first time the latter is featuring in the brand’s advertising.

In one image, model Sharam Diniz is pictured on the left-hand side hanging from rings above the sea, while a J12 watch on the right has the time set at 6 o’clock, creating a similar vertical line. The watch hands in all the visuals are set to reflect a strong angle or pose on the opposite page, breaking with the convention of photographing watches set at 10:10.

Philippe Mougenot, president of Chanel’s watch and jewelry division, said that while the move may be considered “sacrilege” by purists, it was part of the brand’s aim to subvert conventions. “It is a concept that is a bit different from what is usually in the market, which is relatively conservative in terms of communication,” he said, noting the brand’s previous ad images — with the exception of a campaign last year focused on the Première — made their debut in 2003.

The new images broke in French daily Le Figaro last month and will start appearing in international daily, weekly and digital press in June, and from mid-May in the June issues of printed monthly international magazines.