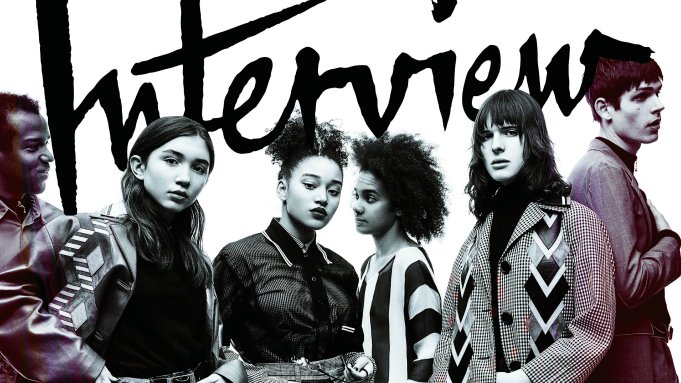 Interview Magazine is looking beyond the celebrity cover in April with a themed issue on social change.

The issue, which goes on sale Friday, features advocates, some known, others not, who are leading the charge on subjects ranging from gender and racial equality, Lesbian, Gay, Bisexual and Transgender issues, environmental protections, political transparency and gun control, among other things.

Although the magazine includes interviews with known activists, such as Susan Sarandon, Chelsea Manning, Oliver Stone, Rick Owens, Cecile Richards and Jane Goodall, editor in chief Keith Pollock said his staff decided to put a group of lesser-known “noisemakers” on the cover with the tagline “The New Progressives.”

“We’re a magazine that celebrates personalities and celebrities but we felt that to get this message across, it was about bringing this group together,” said Pollock, who offered that the conversation right now is about the “contentious presidential election” and the push for “progress and change.”

The through-line for many of new guard is social media, said Interview senior editor Chris Wallace, who noted that platforms such as Twitter and Facebook have helped “amplify” the voice of this generation.

“I’m so impressed by how nimbly they [the activists] can navigate between issues,” said Wallace, who explained that there’s “solidarity” among activists in this generation, and thanks to social media, they advocate for easily many causes, not just one.

When asked who would snap up the April Issue of Interview, a magazine known more for pop culture coverage than social activism, Wallace offered: “I hope The New Yorker reader and Thrasher Magazine reader…I hope we speak to both of them. We have a huge range that we’re able to cover.”

The thematic issue is in a sense, Interview’s response to explosive cultural moments such as the riots in Ferguson, Mo., Wallace offered.

He noted the challenge a 10-issue-a-year magazine has in trying to enter the conversation. By highlighting emerging leaders, Interview is able to take part in a meaningful way. The magazine will also begin rolling out some of the stories in the April issue this week, and it will unveil an Instagram campaign related to social change that dovetails with the issue.