In the ever-evolving marketing dialogue, one concept dominates the conversation: social media. 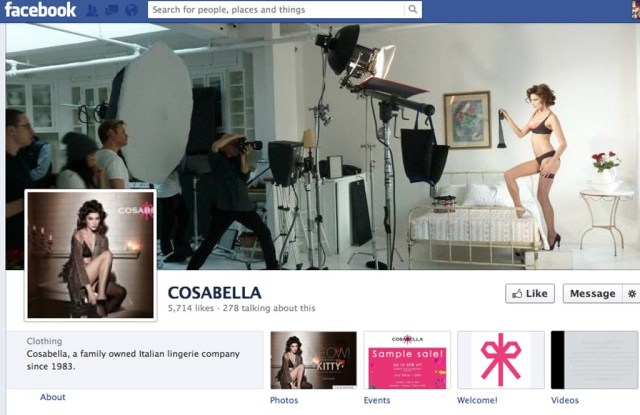 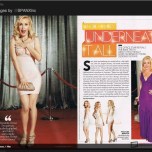 In the ever-evolving marketing dialogue, one concept dominates the conversation: social media. It’s been the marketing buzzword of the last several years, as consumers embrace the onslaught of platforms, from iPhone apps to Facebook to Pinterest. So how are lingerie brands jumping on the bandwagon to reel in customers?

For many brands, Facebook forms the centerpiece of the social media infrastructure, the fundamental and frequent first step toward consumer engagement. Cosabella was a relatively early adopter, joining the site in November 2008. “We’ve always been on the forefront of social media, thanks to Valeria Campello [the company’s founder],” said Pallavi Ramamurthy, Cosabella’s global marketing manager. “Back when we all used dial-up modems and we were all only using the Internet through AOL, Valeria was talking to these women in chatrooms and on discussion boards. This was before the thong was something we all had in our dressers. She’d see these women post complaints about panty lines and she was on there saying, ‘No, you can wear this beautiful thong! Look what we’ve developed!’”

Ramamurthy said while Cosabella is active on Twitter, Pinterest, Flickr and, just recently, Instagram, Facebook is the clear front-runner. “It’s definitely our strongest, our most active [platform],” she said. “I think people react to it so strongly because it’s so visual yet news-driven. The time line helps create excitement because it adds a sense of newness to the content.”

With 900 million-plus monthly active users, not only does Facebook offer the largest pool of current and potential customers, but it’s also typically the first, and sometimes only, digital platform consumers join. Consequently, Facebook is deemed the most effective means of reaching the broadest audience. “Our customer isn’t in high school. She’s between the ages of 28 and 45 so she’s not necessarily so social media-savvy that she’s jumping on whatever the next new thing may be,” said Ashley Jones, who oversees social media for Only Hearts. “That’s why we stay true to Facebook — it’s easy to understand, it’s been around a long time, it’s something our customer definitely uses.” Only Hearts has taken a measured approach to social media, setting up shop only on Facebook, Twitter and, just recently, Instagram. On Aug. 5, the loungewear brand will initiate an incentive-driven promotion program across its platforms. “If you follow us on Twitter or ‘like’ us on Facebook, you’ll receive a certain percent off [of purchase] on our Web site,” Jones said. “A lot of our social media is geared toward trying to drive traffic to our Web site.”

Though Facebook may be in the lead for lingerie brands, Twitter is fast on its heels. Hanky Panky has adopted an unorthodox Twitter strategy — divide and conquer. The company maintains five entirely distinct Twitter accounts. The primary Hanky Panky Twitter account, @hanky_panky_ltd, which as of press time had 5,011 followers, is complemented by four others headed up by different brand employees. “We compose what we call the Panty Panel,” said J.D. Breen, who’s known at the company as “Glam Guru.” “We all handle different aspects of the brand. I do all the visuals and the styling of all of our photo shoots and lookbooks, so that’s the perspective of my Twitter [@hankypankyJD].” The other three accounts are operated by Larissa King, senior designer, tasked with keeping customers posted on new product; Shari Hoenig, e-commerce manager, who informs consumers of sales and deals, and Hillary Byers, the teams’ blogger. As for the 140-character-or-less customer interaction, Breen said, “They’re always asking for advice: ‘I’m wearing this garment, what do you think I should wear underneath?’ Pointing them in the right direction is pretty rewarding.”

Maggie Adams Klein, director of brand and public relations for Spanx, agrees that the focus of social media should be direct contact with the consumer. “We’re investing in Facebook and Twitter over other platforms because they are dialogue-driven,” Adams Klein said of the innerwear company’s social media program, which also includes posting its many television spots (e.g. the “Today” show, “Good Morning America,” etc.) on the company YouTube channel, youtube.com/spanxinc. “If we’re making [the customer] laugh while improving their rear view, we’re doing our job, one tweet at a time.”

boutiques or associates from department stores, to tweet us from the floor saying something like, ‘We just got your Hello Kitty collection in. It looks amazing!’ So it definitely strengthens those relationships.”

Pinterest, the latest platform to permeate the social media scene, is ideal for the fashion industry as it’s an entirely visual entity, strikingly similar to designer inspiration boards. While many lingerie brands are still cautious to join Pinterest simply because the site has only gained traction in the past few months, Cosabella has embraced it. “We frame our boards around themes and inspirations,” Ramamurthy said. “We have different pictures of these Old Hollywood celebrities and vintage cars mixed in. It’s a fun way to deepen your brand’s aesthetic.”

Whatever avenue intimates brands take, the goal is ultimately singular. “Every tweet is basically a press release. But it’s not only about keeping the message out there and building brand awareness,” Breen said. “It’s also imperative to be in-the-know, to be keenly aware of the vernacular of the consumer and the public. You want to be part of the club.”