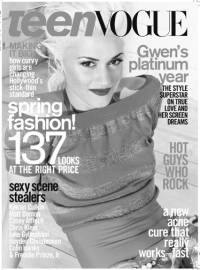 NEW YORK — Do enough girls care more about photos of Testino than the albums of J.Lo to make Teen Vogue the next big hit in teen magazines? The first official issue of the years-in-the-making spinoff arrives on newsstands later this month, sheltered in special pockets designed to protect and promote its petite size.

Printed in the smaller A5 “European” format that has made Glamour a hit in Britain, Italy and Germany, Teen Vogue will be the smallest and most aggressively priced magazine (at $1.50) Condé Nast has ever published. It might also be the first teen magazine that’s post-post-Sassy. It speaks in a voice of detached sophistication borrowed from its parent instead of its competitors’ exuberance. The photography is slickly shot by Mario Testino, Raymond Meier and the late Herb Ritts. And those columns on “Hunk of the Month” are nowhere to be seen. This is still Vogue, after all.

It’s not surprising, considering editor Amy Astley was the beauty director at the parent magazine before sliding over, and she said she still talks to her editorial director, Anna Wintour, every day. She saw no reason to build a teen magazine along standard lines. “What would we be bringing to the table?” she asked. “A topic that seems wildly inappropriate for Vogue,” like frank but cute advice about sex, “shouldn’t appear here either.”

Instead, she’s created a studied take on teenage fashion, nodding to financial realities on one hand — with DIY fashion tips and low-cost alternatives to runway looks — but practically parodying the genre on the other by sticking with inimitable Vogue style. Astley says focus groups from the four test issues of the magazine asked for more “real people.” So instead of giving readers celebrities, Teen Vogue offers them their children: In a spread by Testino, Roger Waters’ daughter India lounges with two sons of Bryan Ferry’s. Elsewhere, model Devon Aoki writes about her unconventional looks, and Marissa Winokur, the star of “Hairspray” on Broadway, contributes an essay on being happy with her unconventional size.

Teen Vogue is trying to have it both ways in all categories. Astley is selling the magazine’s air of exclusivity while drawing a semi-mass audience. “I’d be thrilled to have 850,000 readers five years out,” she said (the rate base at launch is 450,000). And publisher Gina Sanders has been busy selling pages to Burberry and Gap.

Sanders happily handed out a fact sheet comparing Teen Vogue’s ad pages at launch with its youngest competitors. While only narrowly beating Ellegirl, it trumps the launch issues of Teen People and Cosmogirl by large margins. She also touted the high-low mix she’s assembled — Coca-Cola and Old Navy next to David Yurman and Marc Jacobs, the latter pair appearing exclusively among teen titles in Teen Vogue.

Sanders was less eager to discuss whether those pages arrived in a package deal with Vogue or its downscale corporate cousin Lucky. She isn’t pushing Teen Vogue as part of packages, she said, but she’s listening when advertisers suggest them.

She should. Teen Vogue’s teen rivals were all up in ad pages in 2002, with the exception of Time Inc.’s Teen People. And as the magazine’s readership grows, the pressure on keeping its contents accessible to a mass audience may begin to undermine the exclusivity it’s cloaked itself in at its launch.

“I’m putting my dollars in the vision of Amy Astley and Anna Wintour,” said David Lipman, chairman of Lipman and the media buyer on behalf of Burberry and David Yurman. “The teenage girl today is a lot more sophisticated in her purchasing decisions. Luxury brands are a lot different today than 10 years ago. They’re more approachable, more accessible.”

For that reason, he said, he’s looking to place in Teen Vogue competitors like Ellegirl and Lucky, but among teen magazines, Teen Vogue has “a certain sophistication. Ellegirl would be the second choice, but after that it’s indiscriminate.”