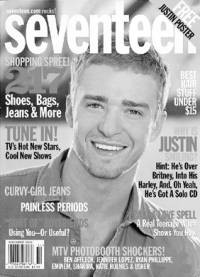 This, editors say, is a typical few months in the life of the teen magazine sector, where underage pop tarts hop from magazine cover to magazine cover faster than a recently divorced Scientologist starring in a big budget Spielberg flick.

“In any given month, there’s going to be one big record release and one real movie release,” said Christina Kelly, editor in chief of YM. “We’re all going to fight tooth and nail to get that cover.”

But the monotony of the sector’s magazine covers is seen by some as evidence of a larger editorial problem.

“These magazines all use different catch phrases to describe themselves but they’re selling the same exact thing,” said one former teen editor, who requested anonymity. “They show the same celebrities, they feature the same advertisers, and they show the same designers. It’s the same recycled information.”

There are certainly a plethora of similarities among the titles, from the bridge lines and Gap clothes photographed on the pages to the obligatory social-conscience piece that pops up in almost every magazine (generally accompanied by titillatingly painful headlines like Teen People’s “Drunk Driving Horror: I Killed My Best Friend.” or Seventeen’s just slightly manipulative “The Pill 101: Strong Medicine For Acne, Cramps, Cancer, and You Know What Else”). Of the fifty-some odd advertisers that took full-page ads in YM’s December issue, an informal survey indicated that more than half placed full-page ads in three or more of its competitors’ publications.

They may even be sharing the same readers.

“For the most part [they are the same readers],” admitted Kelly. “We just did a reader survey and it showed big overlap between readers of YM and all of the teen magazines. They have lots of time and they can read more than one magazine, unlike a 27-year-old woman who doesn’t have that kind of time. Most readers get at least two [of the teen] magazines.”

But the magazines are different, each of the editors insisted, even if their explanations of their “visions” sounded like campaign speeches for student-council president and even if their arguments were all sort of the same.

“Seventeen is the magazine that has everything for every girl, it’s her go-to magazine,” said new editor in chief Sabrina Weill, who started Monday. “It’s the first-choice magazine and it’s the most popular. It’s not a niche magazine and it’s not set up to feed readers into an adult title,” a reference to the proliferation of teen offshoots of adult titles that has included Teen People, Teen Vogue, Elle Girl, and Cosmogirl. “It’s just for teenagers.”

“YM really covers all aspects of a teenager’s life, whereas other magazines cover more fashion or entertainment,” said Kelly. “And those that are [general interest] don’t have the voice that we do. The voice is really what distinguishes the magazine.”

Teen People said its managing editor, Barbara O’Dair, “became a leader right off the bat because [Teen People] was unique. The real teen aspect of Teen People really set it apart. The mission was to present the whole teen. It functions as a life guide and that’s why we have an editorial mix of entertainment, real life, and fashion and beauty.”

In actuality, the points of differences among the various teen titles may lie not so much in the information dispensed, but in the way that information is presented to readers. YM, whose December cover features Christina Aguilera above the headline “Put it this way, she deserves the diva rap,” is slightly snarkier than its competitors. There is also a “feminist vein” that runs through the magazine, said Kelly.

Teen People has a 20 percent male readership and contains more world and entertainment news (they sent a reporter to Afghanistan, the editor pointed out). It, like YM, regularly features boys as well as nonwhite celebrities on the cover, while Seventeen takes a slightly more apple-pie approach and has seldom featured minorities on the cover.

Elizabeth Crow, the editorial director of Primedia, who oversees Seventeen, doesn’t think the similarities pose such a big problem.

Pointing to Seventeen’s Timberlake cover, she said, “He is a monster star. He was smiling on our cover, and he’d just had his heart broken. It was a prescription of delight for us, and if you love a star, you actually don’t mind reading about the star more than one month in a row.”

Readers may or may not agree. Although single-copy sales figures for the slate of Timberlake covers has not yet been released, his current CD is underperforming. The three largest titles have already discovered the hard way what can happen when you have similar mission statements and too much faith in the bubblegum teen pop phenomenon and the stars of the WB.

Although Seventeen remains the leader in terms of overall circulation and advertising pages with a rate base of 2.35 million paid readers and 1,317.5 ad pages in 2002, its newsstand performance — the most accurate barometer for measuring a magazine’s heat — has fallen into fourth place behind Teen People (number one at 500,000), YM (number two at 435,000) and Cosmogirl (number three at 400,000). For the first six months of the year, single-copy sales of Seventeen were down 21.4 percent to 370,000, a drop that capped off three consecutive years of poor performance by the magazine. YM’s newsstand percentage drop was even steeper in the first half of the year (26.8 percent), and Teen People was off 11.4 percent for the same period, according to the Audit Bureau of Circulations.

Hearst’s Cosmogirl has done better, bucking the industry’s downward trend with its blend of saucy coverlines and self-empowering articles for young women. In three years, editor in chief Atoosa Rubenstein has developed a circulation of more than 1 million readers with a rosy newsstand performance that has already surpassed Seventeen’s by almost 10 percent.

The advertising picture has been better because teen spending stayed up in the first half, but it began to drop precipitously in the third quarter as young consumers lost part-time jobs and parents found themselves with less disposable income to give their children.

YM’s Kelly believes the teen category is healthy, though she admits that the overall picture has changed.

“It’s simply not like it was in 1999 and 2000 where this whole category was fueled on the newsstand by Britney Spears and ’N Sync selling unprecedented numbers of records, mostly to people from our demographic. It’s a lot more splintered now.”

“I think you’re seeing what happens in a market that has a leader that’s gotten comfortable while more money is being directed at teens,” said Peter Gardiner, chief media officer and partner at Deutsch, a large advertising agency in Manhattan. He also added that “there are big stars [that are good for these magazines] but they are not the mega Britneys.”

But people still want to get in on the action.

Elle Girl is increasing its frequency and Condé Nast Publications, a unit of Advance Publications, which owns WWD, will launch Teen Vogue, both as bi-monthlies. Teen Vogue will have a circulation of 450,000.

Its editor in chief Amy Astley thinks it will serve a different purpose than the magazines out there.

“I think that’s overstating the importance of fashion to teenagers,” said YM’s Kelly in response.

“They’re very interested in fashion, but a lot of the reason they turn to these magazines is for advice and dealing with things in their lives.”

But Astley is sure it will work. “Everybody can write about sex but none of them — they cannot — compete with our photographers,” she said. “If you have Mario Testino or Raymond Meier shooting, everything looks better.”