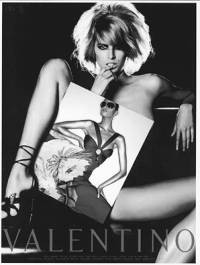 MILAN — When the going gets tough, the tough get going — even if they aren’t spending any more money.

While French houses opted for more subdued campaigns, Italian designers pumped it up a notch, offering a healthy dosage of sex and glamour. What they didn’t do, though, is put the clothes second. From Gucci to Prada, Valentino to Versace, the Italian ad campaigns seemed intent on selling racier images of women, without taking the clothes out of the picture.

And while the campaigns may be sizzling, the budgets aren’t. Most designers have said they will keep budgets flat for spring, hardly a relief given the depressed spring 2002 levels. The exceptions were Dolce & Gabbana and Fendi, both of which said they will be increasing budgets this spring, though neither quantified how much they would increase their spending by.

At Gucci, creative director Tom Ford just keeps stirring up controversy. Apart from the G-spot ad which, as reported, depicts a female model whose pubic hair is shaped like a G, another image has model Louise Pedersen sprawled across Adam Senn’s knees, as if she’s about to be spanked. The photos were shot by Mario Testino in color, on location “in an empty house outside L.A.” and often with spotlight effects. Ford said the mood is “sexy and chic.” The campaign also includes models Carmen Kass and Ivan De Pineda.

Gucci, which already has warned about the continuing tough market conditions in luxury and the uncertainty stemming from a possible war with Iraq, said it is keeping its ad budget flat compared with the corresponding season last year. While it continues to focus on core fashion titles, it also has started to advertise in new magazines such as Italian Flair, Hong Kong’s Jessica, the Japanese edition of GQ, which will be relaunched in April, and the new Harper’s Bazaar Malaysia, which will be launched the same month.

At Valentino, the company’s chief executive officer Michele Norsa said the new campaign’s photos are “strong, but we want our images to stand out and be remembered.” Steven Meisel photographed Karolina Kurkova in black-and-white nudes and color fashion portraits. In the ads, a naked Kurkova holds photos of herself decked out in Valentino. “The combination of the nude photographs and the fashion portraits represents the duality in every woman’s outer appearance,” said Daniela Giardina, director of communications and image. “Behind her chic outer image is a sensual woman, one who is feminine and sexy.”

Giardina said the ad budget is flat and more focused on countries that are commercially more interesting for the company, such as the U.S., France, Spain, England and Russia.

Meisel also photographed the Dolce & Gabbana, Versace and Prada campaigns. For the ninth time, Gisele Bündchen is featured by Dolce & Gabbana. The color photos focus on a sensual Gisele, whom the designers describe as the model who “perfectly embodies our woman,” portrayed in a New York studio, as opposed to the last campaign, where Gisele was surrounded by male models in sunny outdoor photos. On the other hand, the men’s wear campaign will continue to feature groups of models this season.

Versace’s team of Meisel and Amber Valletta emphasized color, reflecting the house’s spring-summer runway presentation of an explosion of short and sizzling clothes and colorful patterns. “The look is very strong, graphic and sexy,” said Donatella Versace. A bleached-blond Valletta was photographed against a metallic background in New York at Milk Studios. Versace said Meisel’s “work is consistently visionary,” and that the photographer “possesses the strong visual language that Versace ad campaigns are known for.”

A spokesman for the company said that while the ad buy is consistent with the budget of a year ago, it has increased visibility in regional publications, “especially in markets where we either have freestanding stores or a strong presence in department and specialty stores.”

Meisel’s Prada campaign was shot in black and white, which contrasts with the color background of the logo, which is overlapped by a model. Other shots are close-ups. Models Elise Crombez and Harry Kinkead pose in a “relaxed” way and, according to Miuccia Prada, with “a natural sensuality expressed by a self-assured woman.” The luxury of details, such as the stone necklaces or the crocodile handbags with metal ring handles, stand out in Meisel’s photos, which have a hazy quality.

Mert Alas and Marcus Piggot photographed both the Fendi and Missoni campaigns, consolidating a longtime relationship with both fashion houses.

While both campaigns portray confident women looking directly at the camera, at Fendi, model Jessica Miller is shot indoors against a dark background, with blue and purple hues and flashes of light highlighting details and handbags. At Missoni, Gisele is photographed outside, against a modern structure, with a sunny coast and beach as a background. Gisele’s positions are sexy, but the styling is kept simple and natural.

For the first time, Stéphane Sednaoui photographed the Gianfranco Ferré campaign, which stars actress Rachel Roberts, Robert De Niro’s muse in the movie “Simone.” The designer said he chose Roberts for her “elegant and almost futurist, but real, beauty.” The photos were shot in black and white and color in Paris and at the Parc de l’Amitié in Rueil. The designer said he wanted to convey an “almost fairy-tale and magical atmosphere.”