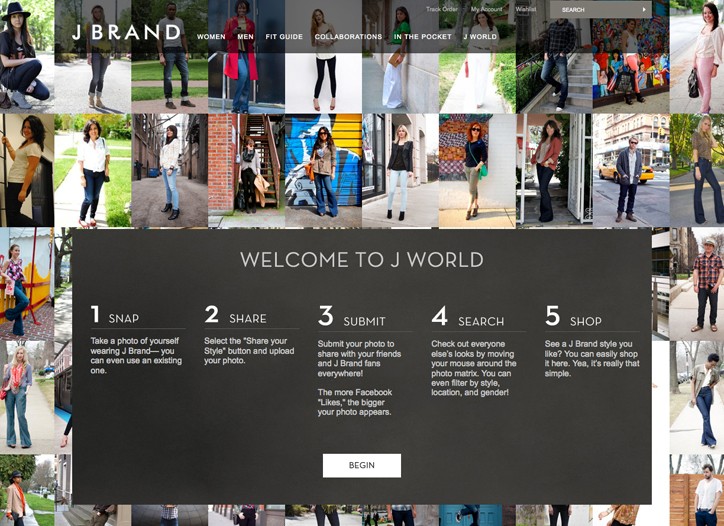 J BRAND GETS SOCIAL WITH NEW WEB SITE: The cult denim brand is having a big week. In addition to the Duchess of Cambridge wearing the brand three times during her whirlwind North American visit, the company unveiled a redesigned Web site Tuesday. The new jbrandjeans.com aims to provide customers with quicker, more efficient online shopping (come fall, users will be able to shop directly from the ad campaign), more interactivity and social engagement tools and elaborate behind-the-scenes content. Among the new features are “Style Notes,” which highlight denim trends and show fans how to wear the brand’s silhouettes through notable stylists (the brand confirmed Brad Goreski will style the brand’s first fall-centric installment in Los Angeles Thursday), and J World, a section of the site where users are encouraged to upload images of themselves wearing J Brand jeans (with the option to share on Twitter and Facebook). There’s also a blog, “In the Pocket,” where posts can range from celebrity sightings, curated content from guest bloggers and a look inside the brand’s culture.

ROUND-TRIP TRAVELER: After leaving Condé Nast Traveler to work as an executive editor for Stephen Drucker’s update of Town & Country last summer, Hanya Yanagihara is on her way back to 4 Times Square. Traveler editor in chief Klara Glowczewska has stolen Yanagihara back with a plush editor at large assignment. “I want to work at Traveler because I get to travel, I get to work with Klara again, which is really great, and I get to be out in the world,” said Yanagihara from her desk in the Hearst Tower, where she was busy closing editor in chief Jay Fielden’s first September issue on Tuesday afternoon. “It’s been fun while it lasted,” she said about working at Hearst, “but this is the job I always wanted.” Yanagihara will report for work in Traveler’s offices in August when she returns from a trip to southeast Asia, where she will be gathering ideas for the magazine.

Yanagihara began at Traveler in 2005 as a features editor and held the title deputy editor by the time she left in 2010. “I always thought of myself as their R&D department,” she said. There was space in the magazine’s headcount to hire Yanagihara back after articles editor Kate Maxwell left earlier this summer for Jet Setter, Gilt Groupe’s travel e-commerce site.

Fielden will be hiring someone to replace Yanagihara, according to a spokesman for Town & Country, but hasn’t selected anyone yet. In the meantime, Lesley Williams, a photo archivist from Ralph Lauren, has joined Town & Country as photo editor.

NOT HOLDING BACK: Last year, Wired.com published excerpts from an online chat involving Bradley Manning, the alleged hacker who is charged with releasing boatloads of classified military documents to WikiLeaks, related to the wars in Iraq and Afghanistan. Since then, numerous publications have reported pieces about Manning. In its July 11 issue, New York said Manning was leaking “as a way to protest the conduct of the war.”

Wired.com had originally only published some of Manning’s chat log to protect sensitive personal information about the soldier but since that’s now been whittled away, Wired released the full log last night. A Wired spokesman said the complete log may offer a clearer view into Manning’s mind-set that many will find counter to the New York story, and reports from others, that focus on Manning’s emotional state of mind. The spokesman added that the logs imply Manning may have actually come to terms with emotional demons before the first WikiLeaks dropped, had a new found sense of decisiveness and his actions were perhaps a more calculated and principled protest against military operations in the Middle East and other places. Judge for yourself: wired.com/threatlevel/2011/07/manning-lamo-logs.

Tom Murry, president and chief executive officer of Calvin Klein Inc., described the portraits of Stone in the campaign as “beautiful,” creating an “emotional connection while emphasizing this important product launch.”

“Lara Stone is one of the world’s top models and her distinct look and sex appeal resonates with our consumers and has synergized our branded lifestyle advertising campaigns around the world,” said Murry.

The Naked Glamour collection was designed to make a woman look even sexier than naked, offering a sophisticated combination of luxurious fabrics with a hint of shine, subtly contrasted by feminine matte trims. The line encompasses lingerie, sleepwear and solutions. Naked Glamour bras provide mid-level coverage for classic comfort and a glamorous look.

TYING THE CHINESE KNOT: XO Group, formerly known as The Knot Inc., is saying, “I do,” to China. The deepening commitment comes as more than 10 million couples head down the aisle, making China the world’s largest wedding market with annual sales of $62 billion. The Knot.com and Ijie.com, a Chinese resource for Western inspiration and local advice for weddings, relationships and pregnancy for Chinese consumers, have partnered with Sina Corp., an online media company, to launch a “Weddings” channel on Sina.com. Ijie.com will provide exclusive wedding and lifestyle content for “Weddings” on Sina.com. One of the top Chinese news and lifestyle portals, Sina.com has been compared with MSN.com and Yahoo.com, and receives 170 million daily unique visitors and 1.3 billion daily page views.

“One reason the Chinese market is so attractive to us is the amount of money people are spending on weddings,” said Carley Roney, co-founder of XO Group. “There is massive growth in the middle- and upper-middle classes.” Elements of Sina.com “Weddings” will include photos of bridal gowns, flowers, decorations and venues, free tools such as My Bride Avatar Builder and My Wedding Web site Builder, and local vendor listings. The Sina.com “Weddings” channel won’t have e-commerce, but Roney said Ijie.com next year will include a transactional component linked to the Sina.com portal. “Everyone has to look somewhere to grow market share,” Roney said. “Hawaii is trying to become a travel destination for Chinese brides. Fashion designers are looking at how to stand out in the Chinese market, where brides rent dresses.” TheKnot.com has a presence in Australia through a licensing agreement and is looking at India, “a powerful market in terms of wedding and lifestyle,” Roney said, “but China is where we’re really investing our money.”