The ads aim to capture the brand’s collegiate feel and showcase a host of Made in Britain fabrics. 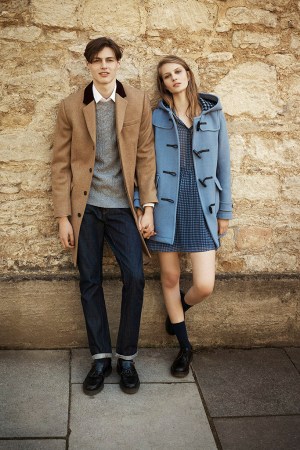 ALL FOR BRITAIN: London designer Richard Nicoll has unveiled his first fall ad campaign for Jack Wills, which aims to capture the brand’s collegiate feel and showcase a host of Made in Britain fabrics.

Gone are the sexy overtones that characterized past campaigns, and in their place is a sensual — but scrubbed up — mood that’s more “Love Story” than “Fast Times at Ridgemont High.”

The ads will break online and in Jack Wills stores on Aug. 13, and will also be featured in the brand’s magazine, which will be mailed to customers later that month.

Nicoll, who’s been creative director of the high street brand for a little over a year, said he wanted to celebrate “cleverness and quirkiness, and embrace knowledge and education. It’s about nostalgia, too — harking back to a time when education was free.”

He said he was also looking to add British heritage pieces to the youthful mix, and was inspired by the “handmade values, charm and authenticity” of the Arts & Crafts Movement and the Bloomsbury Group. He said the collection overall is “less about age and more about attitude” with pieces that are versatile and timeless.

In the past, the brand found it was appealing too much to a younger demographic striving to emulate their older, university-age brothers and sisters. At the same time, it was losing its longstanding customers, who were moving into the workforce – and onto other high street labels such as Topshop, Zara, Superdry and retailers such as Asos.com.

To wit, a plaid cape boasts hand-stitched woolen embroidery, while a light blue duffle was made by the high-end clothing brand London Tradition, based in the British capital. Knits are made in Scotland, and for Christmas, Jack Wills is even weaving its own pink and navy tartan.

Nicoll, who has put his own London Fashion Week runway collection on hold, said he’s also aiming for longevity, to create pieces that can be worn for more than one season that will age well over time.

Nicoll said the past year has been “a baptism of fire, learning about a new retail structure, and that we have the scope to make beautiful product” at prices that run from entry level to 500 pounds, or $765. The average price point is 98 pounds, or $150.