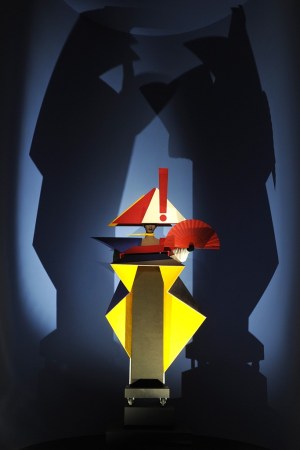 GOUDE TO GO: Walking through Jean-Paul Goude’s retrospective at Les Arts Décoratifs with the man himself is a bit like shadowing a rock star: In every room, he is stopped by fans clamoring for a word, a handshake or an autograph.

It is a measure of the popularity of the maverick artist — there’s no obvious term that spans photographer, filmmaker, illustrator and art director — who captured the French public’s imagination by staging a parade down the Avenue des Champs-Elysées for the bicentennial of the French Revolution in 1989.

“Goudemalion,” which opens to the public today, spans close to seven decades, from his early childhood in the Paris suburb of Saint-Mandé to his current advertising campaigns for department store chain Galeries Lafayette.

At the center of the exhibit is a huge replica locomotive used in the 1989 display, and scattered throughout are installations, sculptures and film clips.

There are rooms dedicated to his stint as art director of Esquire magazine, his collaborations with Grace Jones and his advertising work, including the Coco fragrance ad for Chanel featuring French actress Vanessa Paradis as a bird in a cage.

Running throughout are his flair for theatrics and irreverent sense of humor, nourished by his Irish-American mother, who was a dancer on Broadway before marrying his French father. Goude credits her, and the Vincennes Zoo near Paris with its towering rock, with fueling his obsession with foreign places and faces.

“To me, that rock was Africa, wilderness, a place where there were Indians and cowboys and all that,” said the sprightly 71-year-old, dressed in his trademark outfit of wide-shouldered gray flannel blazer buttoned up to the neck, cropped black trousers and white brogues.

Goude’s obsession with improving his own body — in his opinion, too short, too scrawny and with a “slightly sorry looking butt” — through clothing was the starting point for the technique he dubbed the French Correction, which involves cutting and pasting images in order to manipulate body parts into supernatural shapes.

“I had practically become a walking prosthesis,” he said, pointing to a pair of old sneakers he had fitted with hidden lifts, and which now sit in a glass box next to women’s platform shoes of his design. A film clip shows Goude explaining “cosmetic fashions” to a clearly baffled Mike Douglas on his daytime TV show in 1972.

If the idea started as something of an insider joke, it reached its apotheosis with Goude’s subsequent portrait of his muses — ranging from Farida Khelfa to Jones — who achieve heroic proportions with their artificially elongated limbs. He stopped before the portrait of Jones he shot for the cover of her album “Island Life.”

“Given that she was not at all supple, I was forced to cut her into pieces,” he pondered, referring to his technique of piecing together separate images and painting over the joins for a seamless result — decades before the invention of Photoshop. The pair, who have a son, Paulo, split up in the middle of her One Man Show tour.

“The moment she realized I had fallen in love with the character and that the real Grace did not interest me nearly as much as the one I had fabricated, it was over. There was no more romance possible,” he recalled.

Goude’s perfectionism is legendary. To wit: The retrospective was delayed by a year to accommodate his exacting vision, according to curator Béatrice Salmon. “The strength of his work is his taste for perfection and detail. It’s never approximate,” she said.

Nonetheless, he is no tyrant. On the contrary, Goude has always been drawn to strong women. “Joan of Arc. Women with a sword — they have to have a sword,” he said. He acknowledges that this is at odds with his simultaneous urge to transform them into fantasy creatures.

“It’s not that I fall in love with the character. I consider that the character belongs to me, so if someone tries to steal it or touch it or modify it, I become like a mother with her baby,” he said. “But a woman is not a sculpture, so I know she is going to leave. I know it will end badly.”

In actual fact, Goude has found happiness with his latest, and most long-standing, muse. He has been with his Korean-American wife Karen for 17 years, and the couple have two children.

She was the inspiration for a life-size doll featured in the exhibition, which represents Korea’s Queen Min, who was assassinated in 1895 by swordsmen believed to be loyal to Japan. She lies in a straw-filled crate, clutching a sword.