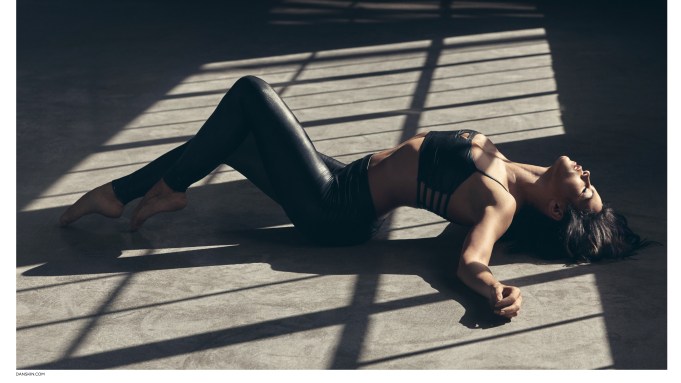 Jenna Dewan Tatum is leaping onto New York billboards and into women’s fashion and lifestyle magazines for her new Danskin ad campaign.

Launching today, the ads show the dancer-turned-actress in edgy activewear styles (read: leatherlike leggings and sports bras with revealing cutouts) as well as the classic dancer uniform of blush pink leotard and matching legwarmers. To spruce up Danskin, which was founded 125 years ago and is now owned by Iconix Brand Group, photographer Carolos Serrao juxtaposed beauty and grit in a photo shoot set in a deconstructed warehouse in Los Angeles’ Arts District.

In one photo, Dewan Tatum curved her back on a cement floor slashed by shadows that matched the straps on her bra. In another, she highlighted her taut abs while dangling from gymnastics rings in a sports bra and heathered sweatpants. She also hinted at her tough side in a black hoodie that offset her hazel eyes.

“I have been dancing since I was a little girl, so working with Danskin felt like home to me,” said Dewan Tatum, who began as a backup dancer for Janet Jackson and headlined the 2006 movie “Step Up” with Channing Tatum, who then added husband to his title of Dewan Tatum’s dance partner.

While the first image of Dewan Tatum in the fall and holiday campaign will tower over New Yorkers in a billboard, the other images will appear in the October issues of Harper’s Bazaar, Self and Teen Vogue as well as the November copies of Vogue, InStyle and Glamour. Her glam team included familiar names in the fashion industry: Brad Goreski for wardrobe styling and Jen Atkin for hair.

Danskin unveiled its plans to sign the 35-year-old Dewan Tatum as the face — and body — of its campaign in August. On her petite but firm shoulders rests its goal to appeal to women who have a familiarity with the brand but also enjoy the plethora of styles from other brands in the competitive activewear market.

“We love that she grew up wearing Danskin and now represents the young mom, with a little girl,” said Carolyn D’Angelo, executive vice president of brand management and marketing services at Iconix. “Jenna’s a dancer with a busy life, which is true of so many of our consumers.”