The ad will break in magazines' August issues. 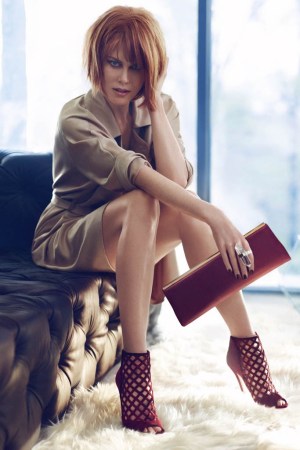 CHANNELING HITCHCOCK: Jimmy Choo’s new ad campaign featuring Nicole Kidman has a film noir feel — with a dash of the Hitchcock heroine. The company, which in May announced the project with Kidman, has revealed the the first images from the campaign, which will break in the August issues of titles including Vogue, Harper’s Bazaar, Another, Love, Tatler, Vanity Fair and Tank. The campaign was shot by Mikael Jansson.

“I really enjoyed being able to play a role that was strong, sexy and in control,” Kidman said. “I got into a relationship with the photographer, and Mikael is very intuitive; he knows what I am thinking and feeling and is able to translate it through the camera.”

This story first appeared in the July 2, 2013 issue of WWD. Subscribe Today.