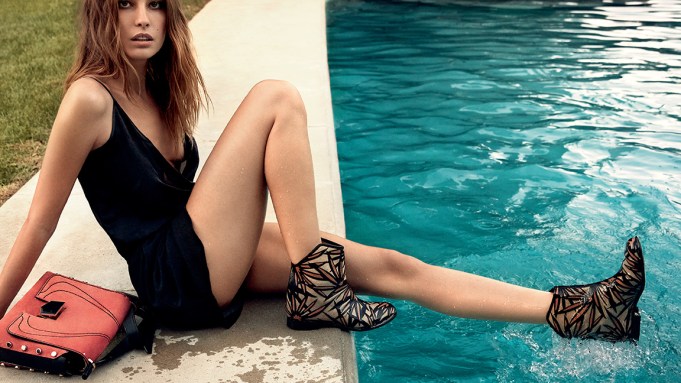 CALIFORNIA DREAM: The blue skies and palm trees of California form the backdrop of the latest Jimmy Choo campaign, which reflects a more laid-back aesthetic.

The brand partnered with New York-based creative agency Laird + Partners for the first time. They worked alongside creative director Sandra Choi on the campaign.

“I wanted the new campaign to illustrate the Jimmy Choo woman and man of today; they have a natural radiance and allure that comes from being confident and self-assured,” said Choi.

Shot by Los Angeles-based photographer Cass Bird, the campaign features models Nadja Bender and David Alexander Flinn living the California lifestyle. The images capture Flinn lounging in the sun in bright-colored sneakers and driving a Mustang, while Bender is seen in ethereal clothing and the brand’s signature heels and knee-high sandals.

“For the women’s campaign, the imagery captures the modern woman — she’s confident with a laid-back approach to glamour that emanates from her self-assurance and unequivocal personal sense of style,” said Choi.

The campaign will break in the March issues of publications including British Vogue and Harper’s Bazaar.