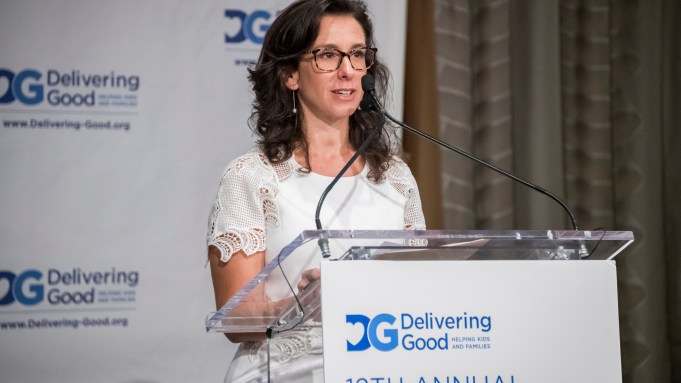 DELIVERING GOOD: Jodi Kantor, Pulitzer Prize-winning New York Times investigative reporter, who along with Megan Twohey, broke the story of Harvey Weinstein’s decades of alleged abuse toward women was the keynote speaker at the Delivering Good luncheon Wednesday at The Pierre hotel.

Speaking to a packed house of more than 420 attendees, Kantor said it was only about a year ago that she and Twohey began to investigate Weinstein. “At the beginning our efforts felt very small and very tentative,” she said. She recalled that many of the Hollywood sources that she spoke to were telling her that they’d never get the story and even if they did, nothing would change. They told her that whatever Weinstein did or did not do with women, “that was how Hollywood worked and that was how life worked.”

But as journalists, she said she and her colleagues believed, as she thinks most of the people in this room believe, “in the power of stories, stories about the vulnerable and how they can empower both victims and readers…and readers have the ability to take action.”

She recalled the moment on Oct. 5 when she and her colleagues were about to hit the “publish” button at the Times, “We had no idea what was going to happen. Harvey Weinstein had been threatening to ruin us and some of our sources, legally, reputationally. He had hired a huge team of lawyers and p.r. experts. He had even hired investigators to gather information about us and try to dupe us. Megan and I were not worried for ourselves. We’re investigative reporters. We live to do this. Confronting the powerful is why we wake up in the morning, but we were very worried for the women we were writing about,” Kantor said.

“Brave Ashley Judd had basically put her career on the line to tell her story about her interactions with Harvey Weinstein,” she said. She said other women were waiting to come forward but weren’t sure they’d be safe and weren’t sure how much the world would care.

“It turns out the world did care. I don’t need to tell you a thing about the reaction to that story because we’ve all been living it here together. We’ve been living it in New York and across the world. We’re in the 35th week of the #MeToo movement,” she said.

“Delivering Good is so much about dignity and bringing new products into people’s lives,” said Carole Postal, an officer of Delivering Good and president of Spotlight Licensing and Brand Management. She said the luncheon exceeded the charity’s attendance and financial goals.