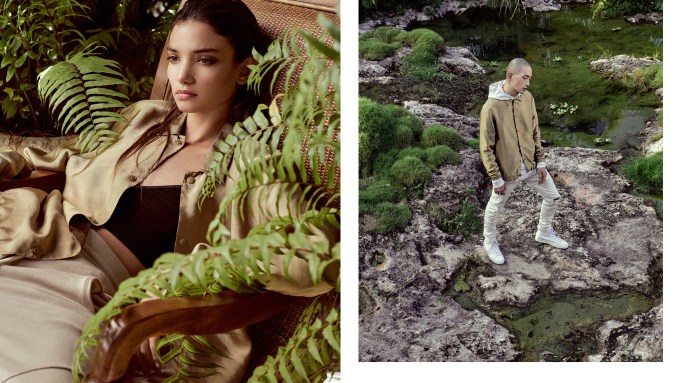 The buzzy men’s wear designer has photographed a woman for his spring advertising campaign for the first time and is exploring eventually getting into the category.

“No, you’re not losing me to the women’s world,” Elliott said from Paris where he was holding some meetings during the men’s shows. “But there is definitely a curiosity there.”

He said since launching his men’s brand four years ago, many of the looks “really translated to women as well. Some of them are a little androgynous.”

Women have also embraced the brand and shouted it out on social media. “I see my girlfriend wearing some of the pieces and they look great,” he said. “So while I’m sticking to men’s for right now, this brand provides a canvas for so many different pieces.” He said there will be no women’s-specific pieces in his fall men’s show in New York on Feb. 1.

The image for the ad campaign shows a female model wearing a silk blouson shirt that Elliott said was a men’s piece, but its “drape, bounce and texture” easily translated to a woman.

The idea of putting his clothes on women started after he realized that the spring 2017 collection, Watching Water, with its refined silk shirt jackets, bombers and metallic terry-cloth mock T-shirts whose shimmer and shine were reminiscent of reflecting water, were just as appropriate for the fairer sex.

“The last collection was one where I explored a new idea and color palette and pushed our guy ahead a little bit,” he said. “That’s what men’s wear is all about — having the confidence to try something out of your comfort zone.”

The campaign was photographed by Patrick Maus. It features male models Piero Mendez and Sung Jin Park and female model Emory Ault. Elliott said “as a novice” to the women’s arena, Ault was “a nice introduction. She was great to work with and the collection looked great on her. So it’ll add a little plot twist to the season. I’m just curious to see how our guy reacts to this.”