The magazines, which launch iPad editions today on Apple’s Newsstand, are among the last in Condé Nast’s stable to join the Apple tablet. 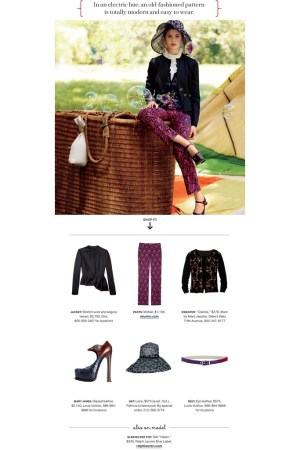 The two magazines are among the last in Condé Nast’s stable to join the Apple tablet, with titles such as Brides and Golf Digest, in addition to signature brands like The New Yorker, having joined last fall. All Hearst titles are available on Newsstand; Time Inc. agreed to add 20 of its magazines in June.

This story first appeared in the July 31, 2012 issue of WWD. Subscribe Today.

For publishers, tablets are increasingly important as a way to shore up revenues, both from print subscriptions and to compensate for declines in print advertising and newsstand sales.

Nine of Condé’s magazines saw subscriptions increase 268 percent in the two weeks following Apple Newsstand’s debut last year, though the company did not break out numbers. Hearst sells about 600,000 magazines on tablet platforms a month, Duncan Edwards, chief executive officer of Hearst Magazines International, said in May. All the sales are digital only; unlike Condé, Hearst does not bundle digital editions for print subscribers.

The pressure print magazines are under is especially in view at Lucky, where ad pages fell 20 percent through September, according to Media Industry Newsletter.

Editor in chief Brandon Holley said the magazine waited to launch its digital edition because “the adoption rate [for tablets] had been lower,” she said. “It’s only now that it’s starting to get enough for it to be worth our efforts.” The magazine started brainstorming in February, Holley said.

She is ginned up about the launch to the point of hyperbole, describing the app as “the most shoppable digital edition of any magazine.”

But the app is a move toward advancing the magazine’s online shopping capability. The iPad edition of the magazine has few unique features — for instance, it has interactive video and some exclusive coupons — but it’s most distinct one is that fashion features are broken down into individual products. When a reader sees Ashley Duncan bracelets, for instance, a link redirects to the designer’s Web site, and that specific product, so a reader can easily buy it from the designer.

Other magazines — most notably Dwell and GQ — have come to financial arrangements with retailers like Nordstrom and Gilt Groupe to produce magazine-branded online stores, with the retailers handling fulfillment. Lucky won’t collect any revenues from the hundreds of hyperlinks on its app. They exist “for user convenience and [are] dictated by the editors based on product they want to feature,” publisher Marcy Bloom explained.

The magazine does collect some measure of revenue from hyperlinks in the app’s ads. Advertisers that buy space in the print edition can opt into the digital edition for no extra cost, Bloom said, but for the hyperlinks, they pay more; Gap and Lancôme are some of the advertisers to take that step.

Holley said the magazine wants to be a facilitator. “The actual buying within apps is a transactional moment, which is not an undertaking one can do immediately. We don’t want to be the merchant of record,” she said. But, she said, the magazine was working toward a Lucky-branded site where readers would be able to pick product sizes and place items in a shopping cart without leaving Lucky’s site. The magazine would not own the merchandise, complete the buying transaction or ship the product, though; that would be handled by a retailer or other type of partner.

“You’d be able to shop, not buy,” she stressed. Further down the line, the magazine might establish relationships along the lines of GQ’s with Nordstrom, and then, “we will get a rev share,” Holley said. That is still some time off, and Holley declined to offer a time line. “We’re signing things. We’re planning things. It’s in the works. We are in the process of building a larger road map.”

Condé’s parent company, Advance, has experimented with launching digital-only editions of legacy brands, like Gourmet. This has lead to speculation that Lucky might one day exist only digitally. Holley said it is “not in any way a possibility.

“There’s no reason to take print out of the picture. That’s a very bad idea, because it’s a very important part of the business equation,” Holley insisted.

In response to questions about declining ad pages and newsstand sales, Holley said “newsstand is no longer the sign of a magazine’s vitality.” Magazines’ falling newsstand sales are the reason publishers “have to develop multiple products and multiple subscription models,” she said.

As of Tuesday, the app is part of a reader’s print subscription; the magazine, like Architectural Digest, is also available as a digital-only subscription (single issues are $3.99 for Lucky, $5.99 for AD). Other tablets, like Kindle Fire and Nook, will also carry it beginning today. Architectural Digest, up 12 percent through September, according to MIN, has added some exclusive photography and interactive floor plans for its app.

Condé magazines that are still not on the iPad: Teen Vogue, W and Details.