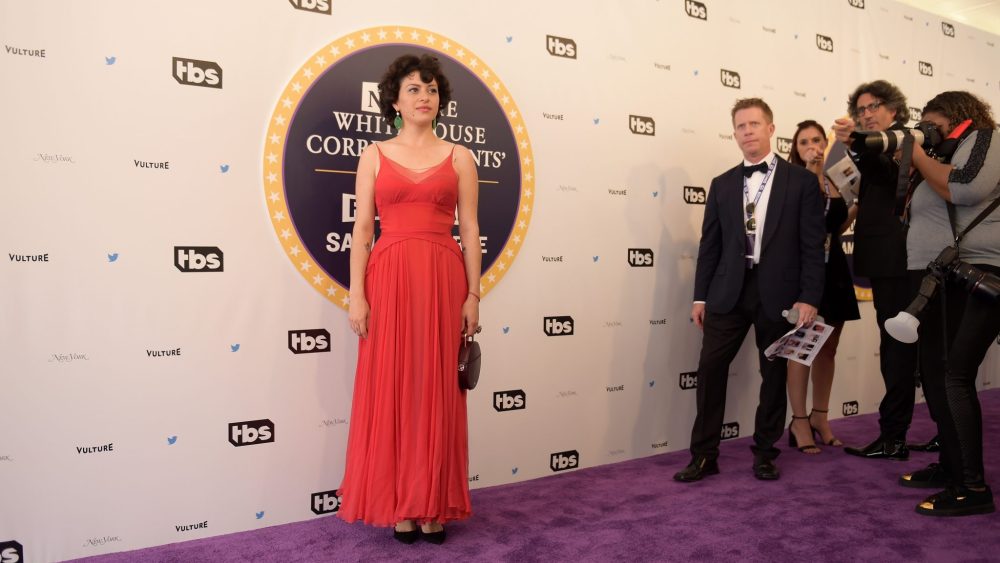 Normally at this time of year, Washington, D.C., is overwhelmed by large crowds and paparazzi elbowing to get a glimpse at preening celebrities who have come to the nation’s capital to attend the White House Correspondents’ Dinner and the parties that take place throughout the weekend.

After a host of high-profile media outlets decided to cancel their parties and President Trump opted out of attending the dinner, many wondered if there was even a point in going.

But the weekend turned into a different kind of celebration, one that served as a reminder of why journalists do the work they do — even though it was a tad self-congratulatory.

The parties may have been smaller and the stars more D list — actors Matthew Modine and Alan Ruck (aka the guy who played Ferris Bueller’s best friend Cameron in “Ferris Bueller’s Day Off”) were the weekend’s ubiquitors — but there was talk of bigger issues, such as the First Amendment, the importance of a free press and combating “fake news.”

“Hollywood is not here, Trump aides aren’t here, but everyone else is here,” said Brian Stelter, host of CNN’s “Reliable Sources,” from the Washington Hilton on Saturday before the dinner. “It definitely takes the energy out of the room.”

Stelter complained about the fact that Trump wouldn’t allow his aides to attend the dinner, but added: “There is an element to this weekend that is so beyond politics. It is to some degree about reporters and the people who they report for.”

On the upside, he said Trump’s “antimedia attacks” can be a teachable moment.

Comedian Samantha Bee echoed that sentiment during the live taping of her show “Not the White House Correspondents’ Dinner,” which took place hours before the actual dinner on April 29, at DAR Constitution Hall.

She mocked the administration’s coined term of  “alternative facts,” among other things, and then launched into a tirade about CNN’s blurring of entertainment and news.

Calling CNN a “reality show loosely based on the news,” Bee implored its president Jeff Zucker to let his reporters, who she called “some of the most talented out there,” to do real journalism in order to “turn the network back into a news organization.”

“It’s such a critical time to stand with the press, and Samantha Bee is one of the greatest satirical journalists of our time,” Wasserstein said. “She tells important truths in a way that is so funny it hurts. We leapt at the chance to partner with her.”

The party, which was held at the W Hotel’s rooftop, drew a few stars, including Will Ferrell, who played former president George W. Bush on Bee’s live show (opening with “how do you like me now?” which drew loud laughter), Padma Lakshmi and “2 Dope Queens” cohost and “Daily Show” alum Jessica Williams.

Following the actual Correspondents’ Dinner, which insiders call the “nerd prom,” partygoers headed to NBC News/MSNBC’s after party, which was smaller this year and held steps from the White House, at the Organization of the American States.

Sponsored by American Airlines, guests entered the party through a velvet rope line that snaked around and mimicked an airport check-in. They were given a faux boarding pass and walked through a security checkpoint where they were wanded-down by an officer. Once inside the grand hall, which was adorned with crystal chandeliers and palm trees, guests were offered hors d’oeuvres that included iceberg lettuce and cocktail shrimp — both bite-sized and served skewered by metal forks.

“Every single person I spoke to at my table said this is better because it’s getting back to the core of what the White House Correspondents’ Association Dinner is about. I loved it,” said CNN Tonight anchor Don Lemon. “No one was overshadowed by the big guy in the room — the president. We weren’t worried if the president was going to be funny, if he was going to call me out. if he was going to be insulting. We were just there to celebrate the First Amendment, the freedom of the press.”

Asked what he thought about Bee’s critique of his network, Lemon said: “Oh, she roasted us. This weekend is about having a sense of humor. You don’t have to agree with what people say on the stage, but that’s what the First Amendment is all about.”

As the night wore on, a cover band called “The Reagans” played pop songs from the Eighties and Nineties. Nostalgic guests clad in ballgowns and tuxedos enthusiastically and awkwardly broke out dance moves that haven’t been seen since President Reagan’s term. Talk about a nerd prom.