Inez van Lamsweerde and Vinoodh Matadin got the nod from Trey Laird to shoot this year’s CFDA journal. 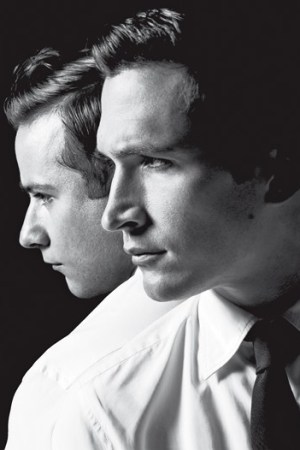 JUST BARELY: Inez van Lamsweerde and Vinoodh Matadin got the nod from Trey Laird to shoot this year’s CFDA journal. “I have known Inez and Vinoodh for years and they are incredible portraitists. I also knew that that is something they liked to do,” Laird said.

In his fourth year of designing the journal for the Council of Fashion Designers of America, Laird set out to create something “really simple but intimate and personal.”

Cohesive as the finished product is, the creative input during the studio shoot was not so cut-and-dried. “Inez tried to make everyone naked. That was the starting point and it went from there,” Laird said with a laugh. “There’s a little bit of skin this time — more than normal,” as evidenced by a bare-chested shot of Wang.

MISSONI’S TARGET ROMP: “Duffy,” a cool caper movie set in the Swinging Sixties, has nothing on the Missoni for Target ad campaign featuring Margherita Maccapani Missoni. The oldest grandchild of founders Tai and Rosita Missoni, Margherita Maccapani Missoni is the company’s accessories designer. Her mother, Angela, is creative director for the main collections, and her grandmother still runs the home collection and the Missoni hotels. A model and aspiring actress, Maccapani Missoni has been a judge on “America’s Top Model.” Now she’s spreading her dramatic wings further, appearing in the ad campaign, for both print and TV, which was filmed in Milan. The TV commercial, directed by American photographer and filmmaker Alex Prager, is described as a Mod Sixties fashion caper. Highlighting items from across the 400-product collection, the ad campaign will have a significant presence on a variety of mediums, including TV, print and online. Missoni for Target features apparel and accessories for women, men, girls and baby and home goods. The line will be available Sept. 13 through Oct. 22.

DESIGNING EDITOR: There’s another name to add to the rising list of editors-turned-designers: W Magazine’s Karla Martinez. For resort, the fashion market and accessories director — who, by the way, is not quitting her day job — is launching a line of loungewear with longtime friend Cecilia de Sola, whose own résumé includes stints at Marie Claire and Vanity Fair. “It’s been in the works for a year,” said the Chile-based de Sola. “We thought there was a hole in the marketplace for luxury loungewear.”

Dubbed Piamita — a play on the Spanish word for pajama — the collection features easy tanks, harem pants, T-shirts and blouses cut from pima cotton and a variety of silks. Key here are the custom prints, some of which nod to Martinez and de Sola’s Latin roots, i.e., the abstract fans inspired by their fan-toting grandmothers or the tiny coffee beans patterned like a cheetah print.

“I grew up around coffee farmers in El Salvador,” explained de Sola. “The cat print, though, came from my own cat Geisha, who’s definitely a lounger.”

Also involved in the collection, which retails from $50 to $500, is Brazilian Luiza Leitai, who worked at São Paulo fashion emporium Daslu and is now handling production for Piamita.