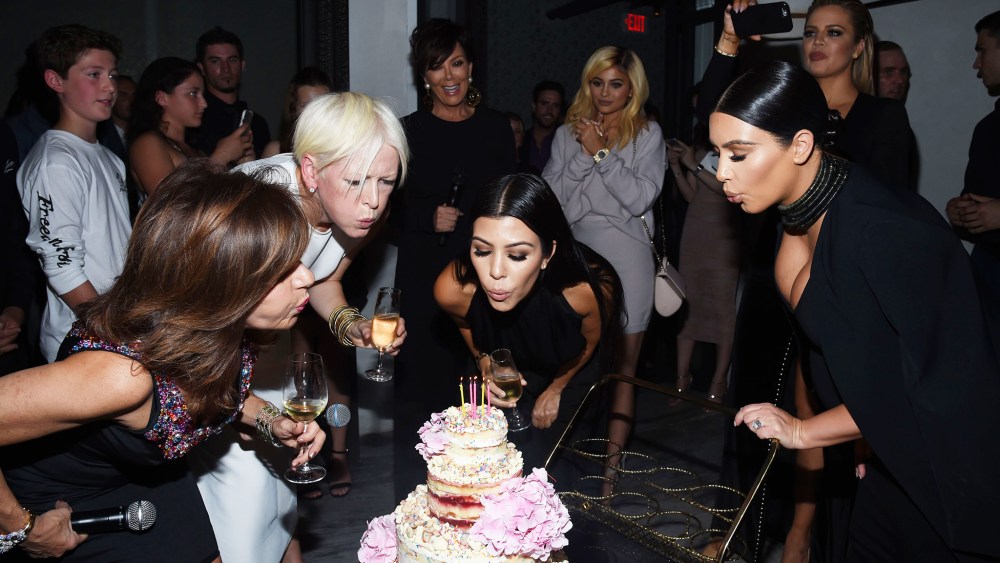 With five members of the Kardashian-Jenner clan in tow, Cosmopolitan learned a thing or two about owning its past and getting camera-ready at its 50th anniversary party.

On Monday night at Ysabel in West Hollywood, editor in chief Joanna Coles welcomed matriarch Kris Jenner and all of her daughters, except for model-of-the-moment Kendall, who was in China. The ubiquitous oversharers appear on the cover of the magazine’s November issue, which lauded them as “America’s First Family.” On a pink carpet, they were undoubtedly the main attraction for guests including Sarah Hyland, Kelly Osbourne, Katie Lowes, Aja Naomi King, Julianne Hough, Caroline Vreeland, Zoey Deutch and Aimee Garcia.

“Who isn’t a fan of the Kardashians?” asked Leona Lewis. “They’re everywhere.”

Lydia Hearst, scion of the publishing company that owns Cosmopolitan, viewed them as a new generation of media stars. “It’s pretty inspiring that they literally are not afraid to be themselves,” she said. “They’re all about transparency and showing who they are.”

However, the Kardashians’ usual transparency turned opaque after their arrival at the party. As Kris fulfilled her duties chatting to TV cameras, Kourtney and Kim quietly walked away and waited for younger sisters Khloé and Kylie to arrive. WWD slipped a question to Khloé, who politely said she wasn’t doing interviews. Social media was the exception; Kim used Snapchat inside of the party. Their publicist mentioned they were taking a break but would return shortly. They did, but it wasn’t to discuss wanderlust or new business ventures. The “Keeping Up with The Kardashians” stars posed for a family portrait, then made a dash for the eatery.

Inside, Kris maintained the spotlight by giving a toast to the magazine. “On behalf of the girls and myself, it has been such an honor to be on the cover of the 50th anniversary of Cosmopolitan,” she said. “This is one of the most exciting partnerships to have. I grew up with Cosmopolitan and my girls have been reading it [too]. We’re so proud to be here.”

The love was mutual as Coles was also happy to see them. “To have five out of six Kardashians is an extraordinary thing,” she said.

In regards to the controversy surrounding the cover title, Coles said, “I think if you added it all up, they are the family that most of us spend the most time with. And we were being tongue-in-cheek when we talked about them being the First Family. On good authority, the real First Family found it rather amusing and have no intention of giving up the Lincoln Bedroom yet to the Kardashians. But if Kanye runs, as he’s promising to do in 2020, then we will look pretty freaking smart.”

Coles and her team can certainly consider themselves ambitious, what with whispers of a new television series in the works. “All I can say is there are a lot of people from NBC here right now, and we’re excited to have Sarah Watson who’s going to be writing the series.”

For those who don’t spend hours studying IMDB, Watson is the writer and producer of shows such as “Parenthood.” Stay tuned for what could turn out to be “Keeping Up With Cosmopolitan.”