The late designer shared his vast knowledge of interior design in the 2008 project, at the behest of T Magazine.

The brand recently discovered Lagerfeld's musings in a forgotten 2008 scrapbook, dedicated largely to his many homes in the world.

A self-actualized man if there ever was one, the late Karl Lagerfeld did harbor at least one regret: That he never got to live in a house designed for him by Tadao Ando in the late Nineties.

“It was not allowed to be built in Paris, and not in Biarritz,” Lagerfeld writes beneath a rendering of the proposed project by the acclaimed Japanese architect. “He is a genius!” 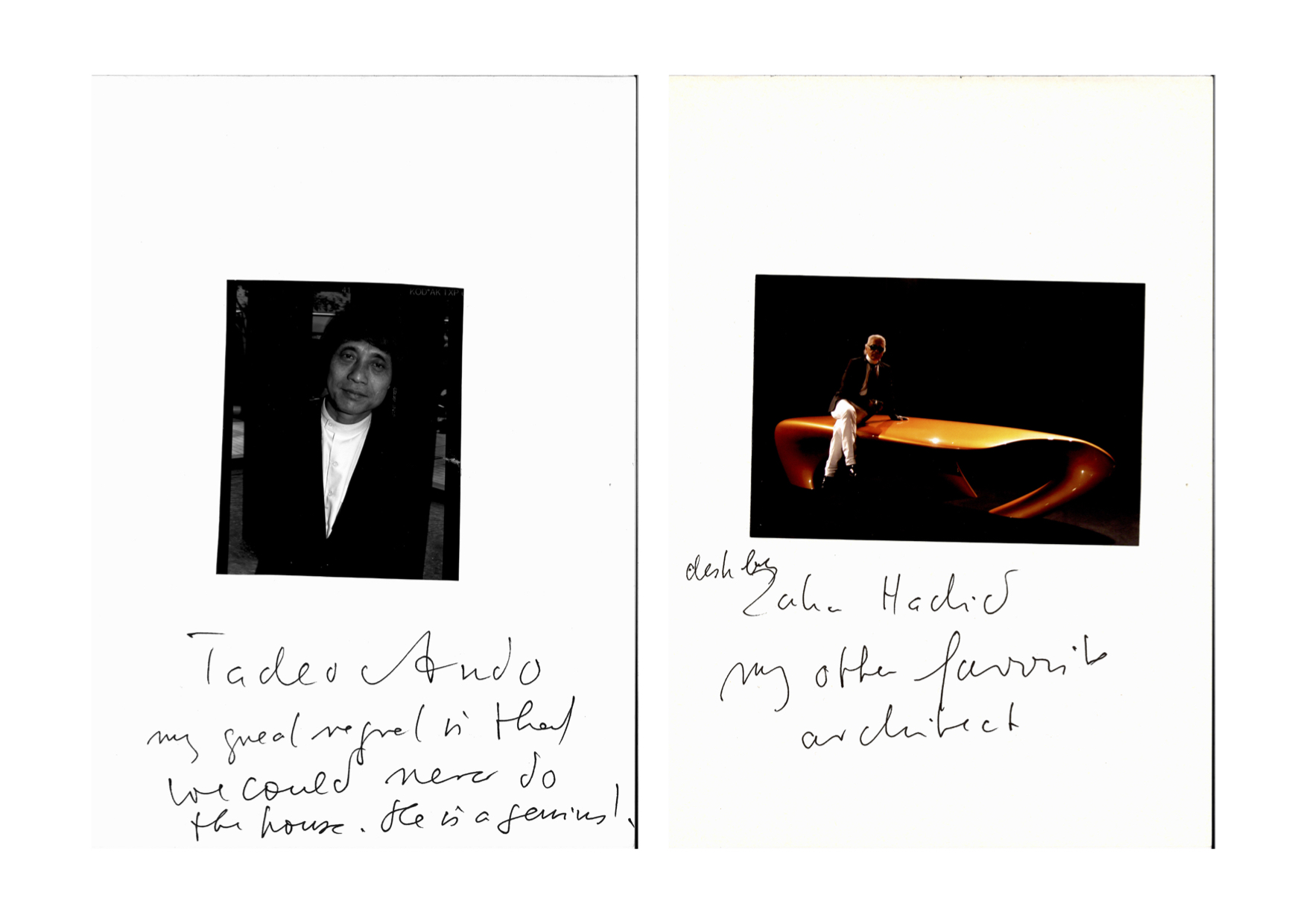 The fashion house that bears the name of the late designer, who died in February 2019, recently discovered Lagerfeld’s musings in a forgotten 2008 scrapbook, dedicated largely to his many homes in the world. Each image carefully glued to the page is enlivened with handwritten commentary, his pen always a faithful conduit for his voice: You can almost hear the incredulity — or the joy — in his descriptions.

“My beloved bookstore done in 1998 by Droog Design,” he notes underneath a snap of 7L on the Rue de Lille in Paris.

“I always loved places near the sea or a river,” he enthuses under a triptych of small sepia-toned photos illustrating “Villa Augusta,” his childhood home in Hamburg, Germany.

“This Chanel bag (1998) is an object I love. It was impossible to produce then,” he sighs under an image of the sleek, ergonomic style, dubbed the 2005.

The musings, occasionally encircling the images, exalt Lagerfeld’s encyclopedic knowledge about interior design: here his Monte-Carlo apartment in a Memphis style; there his Berlin Grunewald apartment. “It’s very ‘Weimar Republic,'” he notes. “I stayed three months in the seven years I had it.”

His photographic memory and deep culture are also on display. He includes an image of a painting he saw as a child at the Hamburg Museum. “How I discovered French impressionism,” he writes. “I saw it again the other day in the exhibition ‘Picasso and the Masters’ in Paris. Had not seen it in 55 years.”

The document was made when T Magazine, then edited by Stefano Tonchi, invited Lagerfeld to share his “inspirations, favorite items and fascinations” for a recurring feature known as Profile in Style.

“It was very, very special for Karl to look back and tell us about his own life through the places he lived in,” Tonchi recalled. “It’s like a biography.” 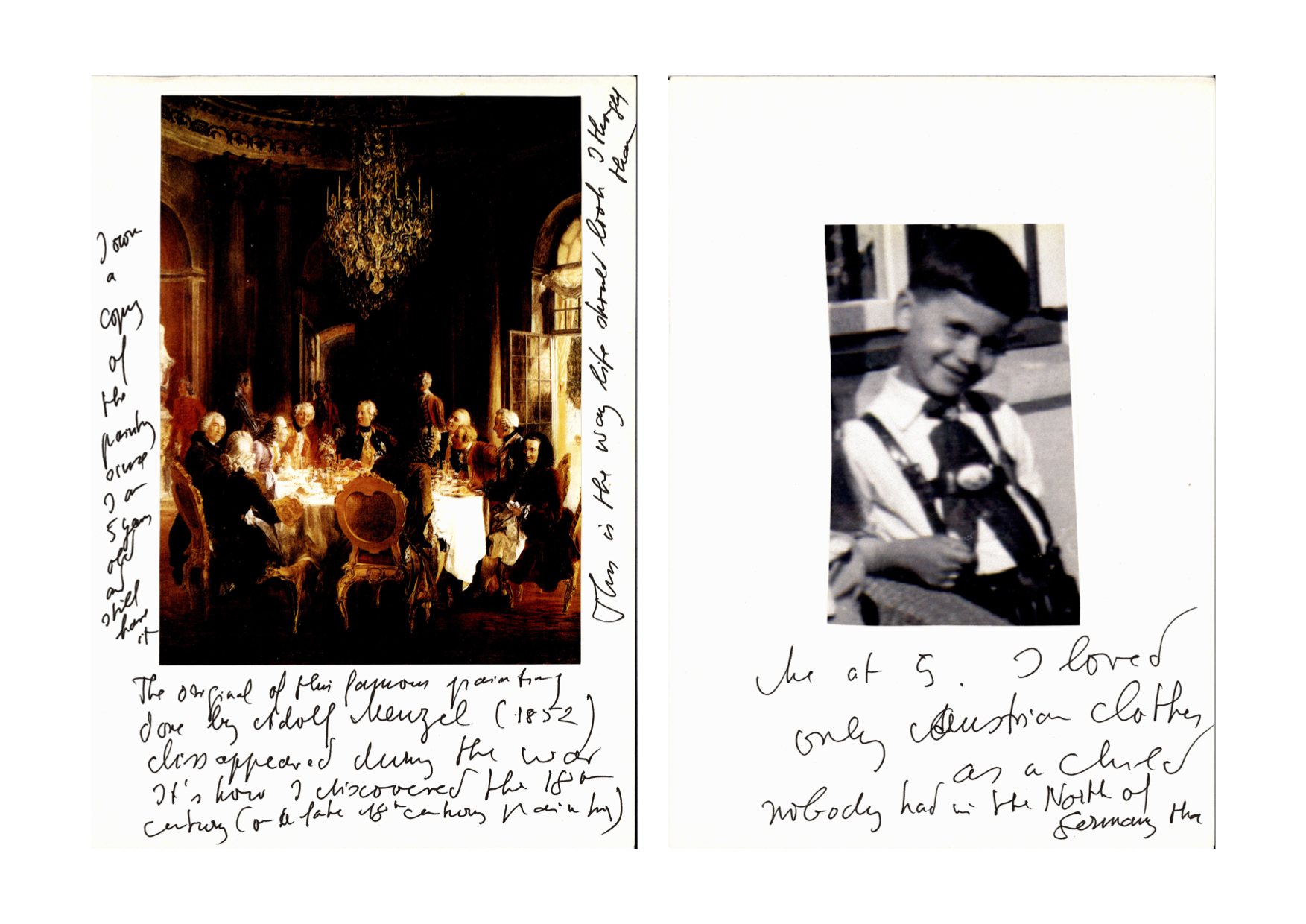 He tucked in a few snaps of himself, including one of him grinning at age five in a white shirt, wide tie and lederhosen. “I loved only Austrian clothing as a child, nobody had [it] in the North of Germany then,” he notes.

There’s also a Polaroid taken in 1983 by Helmut Newton of Lagerfeld peering through a telescope, which the famous photographer captioned it on the back with “The ‘Voyeur’ of MC (Monte-Carlo) looking into the future.”

According to Caroline Lebar, head of image and communications at Karl Lagerfeld, who worked beside the designer for more than 30 years, the time, effort and dedication he put into what was usually a two-page feature is a testament to his vast interests, generosity — and tendency to over-deliver.

“He gave 100 percent of himself into everything he did and was genuinely invested in not only his professional pursuits, but also his friendships and supporting others,” she marveled.

Among the most mysterious and artful photos in the scrapbook is a candlelit dinner in the small, second-floor dining room of his apartment on the Rue de l’Université in Paris, where he lived for 30 years. If you can’t put your finger on its cultural twin, Lagerfeld can, describing it as “very much like the painting of a dinner in the 1770s by (Michel-Barthélémy) Ollivier.”

The Lagerfeld company plans to feature the scrapbook on Karl.com under the title “At Home With Karl.”