Karlie Kloss is coming to a small screen near you — in more ways than one. 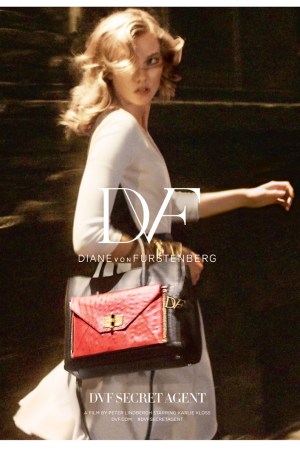 Karlie Kloss is coming to a small screen near you — in more ways than one. The 22-year-old model won’t comment on rumors about being cast in “Zoolander 2,” but her acting career may be starting to take off. Last week, she launched a YouTube channel called Klossy on which she will chronicle her travels and experiences. The 6-foot, 1-inch model will do most of the filming herself and capture events from her side of the camera. She hopes to post a new YouTube video every Tuesday and Friday at 3 p.m.

Then there is the short movie she is appearing in as part of Diane von Furstenberg’s fall ad campaign. In the film, shot by Peter Lindbergh, she goes incognito as a sultry secret agent who transitions from day to night with the help of a handsome accomplice, her DVF Secret Agent bag (a new two-in-one bag with interchangeable pouches in the front) and different outfits from the designer’s fall collection. Kloss leads the man on a cat-and-mouse chase until their mission is accomplished.

“It was so much fun to shoot,” said Kloss, who’s never acted before. “It felt like I was the Bond girl. I don’t know if I’d consider this acting, but if it counts, maybe I’ll send it onto the next James Bond director,” she added.

Kloss has a lot of balls in the air. One of today’s most in-demand — and highest-profile — models, who Forbes estimated made $4 million last year, Kloss has become a social-media phenomenon, with 2.8 million Instagram followers. “In this age of digital media, we all have the ability to put anything out there that we like. I get to share things about my life, my travels, my passions through Instagram, Twitter and Facebook,” she said.

She seems to be all over the Internet, popping up at parties from Paris to L.A., or hanging out with her BFF, Taylor Swift (who looks remarkably like her). The two met backstage at the Victoria’s Secret fashion show two years ago, where Kloss modeled and Swift performed. “We just kind of clicked. We both enjoy baking. We have a love for cookies,” said Kloss.

Cookies are never far from her mind. She has a vegan, gluten-free cookie line, Karlie’s Kookies, with proceeds benefiting hungry children, and this summer started Kode With Karlie, which awards scholarships to young women to learn how to code. Kloss herself is taking a two-week coding class this summer and said she’s looking forward to becoming a freshman at New York University’s Gallatin School of Individualized Study this fall, but hasn’t yet decided on a major. Beyond computer science and coding, she has lots of other interests. “I’ve always been entrepreneurial-minded. I’m excited to get a taste of everything,” she said. But dorm life isn’t in her future: She intends to continue to live in her New York City apartment.

All that is on top of her day job: modeling. She was busy on the international catwalk this spring and is appearing in such fall campaigns as DVF, Kate Spade, Express, Joe Fresh, Versace, Marella and L’Oréal.

Charles DeCaro, creative director of Laspata/ DeCaro, who featured Kloss in their Americana (Manhasset) campaigns in 2012, said she’s able to do so many different shows, campaigns and other initiatives because “she changes. She’s like a chameleon.

“She’s the new Cindy Crawford. She’s become a brand. She’s an American girl and is very much part of that dynamic. She’s from the Midwest and family plays a big part of who she is and who she’s become. She travels with her family and her sisters. Her work ethic is unlike anything you’ve seen in your life. She’s always punctual and pleasant. There are these creatures in the world, and every now and again a new one comes along. She’s the new one.”

Trey Laird, chief executive officer and chief creative officer of Laird + Partners, which created the DVF campaign, agreed. “She’s having a moment. She’s such a great model, but also more than that, a great person and smart collaborator.”

With the launch of the DVF Secret Agent bag, Laird thought it lent itself to a film campaign. “It’s meant to have a little bit of a wink. It’s not meant to be uberserious. It’s about a woman with a little bit of mystery. Karlie is so likeable, she’s got so much charisma, and so much style and the way she moves,” said Laird. The campaign’s videos and images will launch across digital platforms and outdoors on Monday, with the print campaign slated for September magazines.

“She’s totally a DVF girl,” added von Furstenberg, who originally hired her to walk in her spring 2009 show and featured her in a spring 2010 mailer. “She has become this incredible woman, so strong, so ambitious about her life, but in a good way.”

For now, Kloss, who started modeling at age 15, doesn’t know quite where her ambitions will take her. One thing that isn’t a priority in her life at this point is launching her own apparel line, as her friend Taylor Swift has just done with JD.com in China. Kloss already has a collaboration with Frame Denim and had a successful one-season gig with Warby Parker, but designing her own line isn’t in the cards.

With such a full plate of activities, where does Kloss see herself in 10 years? “That’s a loaded one,” she replied. “I haven’t the slightest idea. I hope to be happy and healthy and continuing to challenge myself in new ways. I really love my job. I love modeling and working with designers and photographers. I hope I’m still doing my day job.